Pussy Riot and the Patriarch 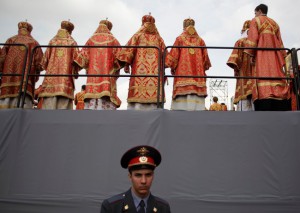 The saga of Pussy Riot, the feminist-punk Russian rock ensemble, began on a hopeful note. Here was the animating ethos of rock and roll and punk rock, with its call for radical individual liberty in the face of conformity, alive and well in — could it be? — the Kremlin. The last time rock seemed so politically potent, rockers were visiting the Berlin Wall, inspiring Westernized youth to bring down the ossified tyrannies of the Eastern Bloc.

I, like many in the West, hoped that the brave, anonymous members of Pussy Riot, together with the anti-Putin riots in the aftermath of the March 4th elections, symbolized the rise of a new, liberal Russia. The arrest of two members of Pussy Riot in early March only seemed to confirm this hope: why would the Russian state bother arresting musicians unless they threatened the integrity of Putin’s government? Just last month, it was easy to imagine that it was only a matter of time before Putin’s regime would be swept away in a democratizing tide.

These hopes obviously seem far-fetched now, but that’s not to say that there was never any basis for them. Anti-Putin demonstrations attracted tens of thousands of Muscovites, many of whom were arrested for exercising the fundamental liberal right to protest. A more open and democratic Russia remains a very real possibility, but like any great victory for the Left, it is facing a considerable reaction. Just as the New Left of the 1960s brought about Nixon and de Gaulle, so too has Pussy Riot, in conjunction with anti-Putin protests, roused the Russian silent majority and its self-appointed soul: the Russian Orthodox Church.

The Church had made its position on Pussy Riot clear from the very onset. Top clerics including Patriarch Kirill I have blasted the band’s blasphemy — they performed anti-Putin songs set to traditional Orthodox melodies in Moscow’s Cathedral of Christ the Savior — and called for lengthy jail terms for the two arrested members. The hardline stance would be easy to laugh off coming from a church — and its cartoonishly hypocritical head — that worked hand-in-hand with Tsarist tyranny.

Yet on Sunday, 65,000 Russians gathered for a prayer service outside the Cathedral as if to prove that voices such as Pussy Riot — or “uprising of the uterus,” in the Orthodox press — remain a bold but embattled minority. Before a crowd that included several Orthodox nationalist groups, the patriarch warned of liberal attacks on the Church, vested in the idea of free speech. That very sentence beggars belief — in the most liberal city in Russia, a crowd approaching the capacity of Luzhniki Stadium amassed in favor of jailing blasphemers. Amazingly, Patriarch Kirill’s attacks were restrained by comparison with other clerics: one prominent Orthodox scholar pined for a 17th-century law ordaining death for blasphemers. Click on that last link, and you’ll notice that its hardline stance places the Orthodox leadership squarely on the side of the majority: some 46% of Russians agree that a two- to seven-year sentence is appropriate for the arrested rockers, while only 30% believe the proposed punishment to be too harsh.

That artists such as Pussy Riot are criticizing Putin’s regime is unequivocally a promising development. But in doing so, they are also taking on a far more robust institution in the Orthodox Church. In the Patriarch’s denunciation of the band, you can practically hear him laughing dismissively: “We survived Stalin; what makes you think you can challenge our power?” The unfortunate truth, for Pussy Riot and for Russia, remains that the people have sided with the political and ecclesiastical powers. Despite the tantalizing promise of artists such as Pussy Riot and the Voina collective, Russia remains tied to autocracy. If such radical critiques are to triumph, they are first going to have to beat back the reaction. As Sunday in Moscow showed, that’s no small feat.