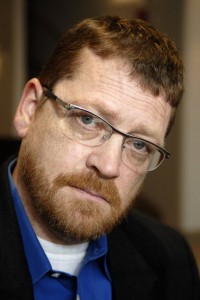 On top of planning an upcoming book tour, teaching classes at Oberlin College, and working on a screenplay for his recent novel Await Your Reply, Dan Chaon has spent the past decade slowly assembling a collection of short stories touching on themes of loss and absence. In Stay Awake, Chaon presents his readers with a new kind of ghost story.

When I was reading this collection, I kept thinking about that Tolstoy quote, that first line from Anna Karenina — “Happy families are all alike; every unhappy family is unhappy in its own way.” How do you feel about families?

How do I feel about families! I know, because they’re all so screwed up in this book.

Every single one! But in their own way.

Well, it’s funny, because I’ve spent my whole life sort of building family connections, and family connections are super important to me. But they’re fragile, and they’re also full of craziness — at least for me, they have been. And I think it’s just such a complicated entity, at least in my own life.

I was adopted as an infant (I think that’s sort of one of those things that I say a lot) and so I had this one family that I was growing up with that I was aware was sort of this construct. Like, I knew that I could have happened to be in any family. Then when I was in my twenties, I got married and had kids, and so I had this new experience of having a family that I’d created, as opposed to having a family that I had been sort of airlifted into. And that was really the first time that I’d seen a biological relative of mine: when I saw my kids. And that was a really transformative experience for me. Then, when I was in my thirties, I met a bunch of my biological relatives, and that was another kind of family experience that had lots of weirdness. It had a lot of good aspects to it, too.

And, you know, over the last few years, I’ve had the experience of kind of losing this family unit, or having it transformed — you know, with the death of my wife and then my kids going off to college. So I’m back at this stage where I am a single person again, and very disconnected, in some ways, from all of that family life. And so those transformations, I guess, have been on my mind, the transformations that have happened over the last thirty years or so have been on my mind.

Where else do you think these stories came from?

There are a variety of different places. I think that in some ways I’m starting with a concept in this book, in that I wanted to play with the form of the ghost story, so I was using that as a kind of container. And that gave me a framework to work with… It can allow me to talk about things that are very personal without being autobiographical.

I was also just writing about things that struck me, or that, for some reason, I found compelling. And those might have been anecdotes that someone had told me, or anecdotes that were in the news. “Stay Awake” — that child’s condition [in the story] is based on a real condition. There was a baby on Oprah that had that condition, and I just marked it down and wanted to write about it.

There was a This American Life episode maybe ten year ago about a woman who was married to a guy — I don’t know if he was brain-damaged or he had a stroke — but she was married to him, and after he’d had the stroke she continued to have children with him. And I was like, “Wow, that’s a really weird thing to do.” And that kind of got my mind thinking about what it would be like to be married to somebody who had become a completely different person. And then that became sort of the story [“Long Delayed, Always Expected”] that is in the collection, which is a little different — she doesn’t get married to him, she’s divorced, but sort of gets back together with him. I think that’s really where the idea came from.

So many stories are set in places that come from your own life — Ohio, Nebraska, Chicago.

For me I think that landscape has this kind of grounding quality, so that it gives you sort of a home base of reality that you can draw on, and that makes it, for me, easier to do other kinds of invention. When I have written about places that I don’t know well, I think that it kind of flips, so that I’m mostly exploring what the landscape feels like, and using something else as my home base. So I have to have grounding in one thing or another.

For me, it’s easier to have landscape as my centerpoint because I know what energy I’m getting from that landscape. I don’t want to sound too New Age-y… but all the landscapes that I’m talking about, particularly Cleveland and Nebraska, have a certain kind of desolate quality that I like to draw on, and that is useful to me as a writer.

You didn’t sit down to write this collection of stories all at once.

No. I mean, one of the things about stories is that you can sort of go into it, be there for a while, and then go do other things. And that has been my story writing process, because it does take me a long time to accumulate enough information to make a story. So all the stories in here were sort of written in between as sort of alternate journeys in between writing the two novels that I wrote over the last, since 2000. I love writing stories, and it was like taking a break, in some ways, from the novels. Or like a palate-cleanser, or something.

But also it takes me so long to actually finish a story that it felt really good to not feel any pressure to have a complete collection. Many of these stories just went through draft after draft and sort of sat around for a really long time. I mean, that story “I Wake Up” has been around probably for eight or nine years, and it’s just gone through little changes. At one point I thought it was going to be a novel.

It was just nice to sort of be able to let things develop in the root cellar until they were really to be brought out. That was actually the thing I liked about this collection, that it did really accumulate over a period of years, so it feels like a document that sort of represents a certain period of my life — a long period of my life.

Why did you choose “Stay Awake” as the title of the collection?

It went back and forth a lot. There were a lot of different ideas of what the title should be. I always thought that that was sort of the mood that I wanted for the collection. …the mood from that title. It comes from a lullaby that’s in the Disney movie Mary Poppins. Back in the early ’90s, there was this compilation of covers of Disney songs by indie artists and there’s a great, incredibly haunting and spooky acapella cover of the song “Stay Awake” by Suzanne Vega… it really inspired a lot of the mood that I was after.

Does the epigraph contribute to that mood as well? (“I had a dream that I was awake and I woke up to find myself asleep.”)

Oh, the Stan Laurel thing? It’s a quote that’s attributed to him. I just like the sort of circularity of it. I felt like it was interesting to me because it was both slightly sinister and slightly funny, which is what I think a lot of the stories do. I keep telling people these stories have a funny side to them and everybody looks at me kind of blankly, like…

If you hear me read them aloud, you’ll realize they’re funny! But I think I want to kind of keep pushing that idea: that they’re not just incredibly depressing, but maybe that they’re funny, too, in some ways.

“Long Delayed, Always Expected” was my favorite story. It felt more lighthearted than the others, which is why I think I was drawn to it.

That was probably the last story I finished from the collection. I was really hoping to include some things that were a little more lighthearted, or that I thought were a little more lighthearted. A couple of the stories that I originally intended to be funny, like “Take This, Brother, May It Serve You Well” and “Shepherdess,” took such dark turns! I think they are funny, but only in certain moments, and that the overall feeling of them is not funny.

Well, it’s kind of funny that they turned out so dark when you intended them to be light.

It’s always that way, you know? I always think that I’m writing something that’s comedic, and then I show it to somebody and they’re like, “Yikes!”

Do you feel that you have no control over what direction you’ll go in, while you’re writing a story?

I think there’s an aspect of that — that you don’t necessarily have control over the mood of the story, that in some weird way the mood possesses you. You can’t really escape it.

Mood seems to be something you focus on quite a bit.

It is, yeah. I mean, I do feel like there’s an aspect of a story that’s different from a novel. And I feel like stories can really possess you, that they can feel like waking dreams and you don’t necessarily know what’s going to emerge from them. You just can’t do a novel like that. I’ve tried, and believe me — it just turns into a huge mess. There’s a lot more, sort of, planning out that has to happen with a novel.

Do you have a favorite story in this collection?

I love all my babies! I have a real fondness for the last story, which is called, “The Farm, the Gold, the Lily-White Hands.”

I felt a little lost in that one.

I loved writing about those three sisters. That was part of it. And the fact that each of the sisters was haunted in a different way, and that the hauntings took different forms, although they were all sort of related to this moment where their father tried to kill them.

Minor detail! Well, they were little. Why should that affect them now? You know, I think that’s always the question — why should something that happened 20 years ago matter now? Why do I keep thinking about that thing? And what if I had done this or that differently, how would my life be different? Those are ghost questions, you know? Because they’re abstract, but they also have this power to rise up in your life. The people that you might have been, or the things that you might have done, or the things that happened that you wish didn’t happen — those are the real ghosts.