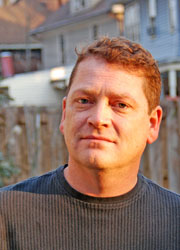 in conversation with Max Rivlin-Nadler

Dan Chaon is the author of two novels and two short-story collections.  A National Book Award finalist, his most recent novel, Await Your Reply, was described as “ambitious, gripping and unrelentingly bleak.”  Sometimes, Chaon writes about men who like to drink beer and look at fires. Sometimes, Chaon writes about calmly looking at your severed hand.  Mostly though, Chaon writes characters brimming with emotional complexity who try (and fail).  Full Stop caught Chaon while he was in a car somewhere in Wisconsin, looking back at 2010 in its waning moments.

What have you been reading and enjoying in 2010?

The Jennifer Egan book, A Visit From The Goon Squad, was one of my favorites. It’s sort of this amazing short-story/novel hybrid that I haven’t ever seen before. It’s doing all these interesting things with time and perspective that I think are really, really smart. And it’s beautifully written and funny, and it’s about rock and roll and about how people age, both of which I’m interested in at the moment.

I was also really big on The Surf Guru by Doug Dorst. It’s a bunch of really innovative short stories that do a lot of different types of things [and] take on a lot of issues that you don’t see short stories often doing. Short stories tend to have much more of a domestic focus, where his are much more exotic. The politics are more upfront. One takes place at a guerrilla camp in South America, you know, guerrilla with a “U”, not a Gorilla camp like with monkeys.

I loved the James Hynes novel Next, which has a nice slow build like a thriller but then has this cool twist ending thing that’s nice and surprising. Super disturbing.

Have you been following The Hunger Games?

It didn’t do that much for me. I love kids books because they’re things that are very emotionally immediate and have a lot of plot. Some adult books are not as well written as children’s books. The emotional stakes are so high in children’s books.

Every time Philip Pullman goes adult it gets weird.

Yeah, he had that horrible book. I think it was called Donkey-Jesus or something.

Have you seen any distinct trends in fiction-writing during 2010?

I feel like people are more open to a wider variety of plot and genre stuff than they used to be and that’s a good thing. The whole argument about what’s literary and what’s genre, those lines are starting to break down in a nice way that I think is going to be useful to a lot of people. It’s just interesting to have novels where things happen. I think it’s fun to see a range of influences out there more. But that transition has been ongoing for the past couple of years.

For the past few months you’ve been posting the kind of insane international covers for Await Your Reply. Which one is your favorite?

I do like the Polish covers. Interestingly, a lot of Polish people have enjoyed my book. 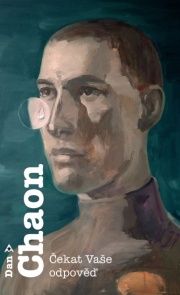 In the essay “MFA vs. NYC” which n+1 published…

n+1 is like the Pitchfork of the literary world. I didn’t read the article, I try to stay away.

Well, in any case, they said if you can’t take the current publishing scene, you might as well move to Cleveland…

Fuck them. Clevelanders are aware that people use Cleveland as the pejorative armpit of America. If you want to say, go to someplace sucky, you say go to Cleveland. But I like Cleveland so… I don’t really care what people say.

Which writers have best captured the current state of the Midwest?

I love the Bonnie Joe Campbell collection, American Salvage. It does a great job of describing the rust belt world. And then, this isn’t exactly the Midwest because it’s Pennsylvania, but the Philipp Meyer book, American Rust, is really good and feels like it’s about the Midwest, in the sort of Bruce Springsteen-y way.

Being from Nebraska and writing about Nebraska, how did you feel about Springsteen’s projection of Nebraska while growing up?

I love that album, it’s meant a lot to me over the years.

Going back to big moments in 2010, were you satisfied with the end of Lost?

It’s sitting really bad. I feel like they fucked it up. If someone had told me it was going to end the way it did, I would have laughed cause it was ridiculous. But a lot of it was because Brian K. Vaughan left, and it became clear nobody knew what they were doing at the end. I got verklempt at the end but they didn’t do the right thing, they screwed up the time travel and they could have done some cool things with string theory, but instead it ended up being the most simplistic allegory ever. I think what happened was an experiment as to how complicated a series Network TV would allow, and they should have been more brave.

I really liked the new Charles Burns comic. It’s looking like it could be as good as Black Hole. The most amazing comic this year is Lynda Barry’s Picture This, which is an incredibly good essay on the creative process.

Do you see genre returning in comics too?

I think a lot of the darker more misanthropic material from writers like Daniel Clowes and Adrian Tomine have roots in horror comics more than anything. They are so much about revulsion towards humanity. I don’t know whether you saw Wilson by Daniel Clowes, but it’s super super dark.

What’s next for Dan Chaon?

In 2012 I have a new book of short stories coming out.

Well that’s in December, right? So I’ll at least have a few months with my last book out in the world. I’ve made it through so many apocalypses, though, I don’t have any interest in the new ones.