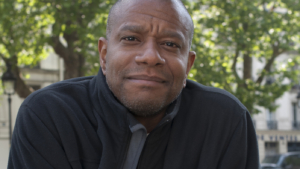 In conversation, Paul Beatty doesn’t quite get to the point. Or maybe, as in his fiction, he just gets to a bunch of points. Either way, if you don’t keep up, you risk missing the strange, honest, cruel, and hilarious worlds of Beatty’s works. There’s so much story out there, and yet so much American fiction seems stuck in a loop — the settings, the problems, the characters becoming increasingly familiar. The protagonist of Beatty’s new novel, The Sellout, however, is a breath of fresh, homegrown air.

After his father is killed by the police and his town wiped off the map, Beatty’s narrator, Me, a black farmer/surfer/sellout radical, becomes bent on re-segregating his fictional Los Angeles neighborhood of Dickens. From creating a fake charter school to provoking Clarence Thomas into breaking his longtime silence on the Supreme Court, our hero takes us for a ride on his horse to the heart of American history and identity, cutting through as much shit as possible along the way.

We spoke with Beatty in a cafe on the Lower East Side of Manhattan, where Beatty lives.

Max Rivlin-Nadler: Beyond running for City Council or re-segregating neighborhoods, your characters don’t seem to have a clear agenda.

Paul Beatty: There is an agenda. I think the agenda is to get people to notice the things that people aren’t noticing. To notice the people that people don’t really notice. That’s part of my agenda, the book’s agenda.

The book also places a lot of importance on people telling it like it is. Why is that?

I don’t know if that’s a function to just get the story told or some bigger aesthetic. A friend of mine comes to mind, Evelyn McDonald. She always says, “You have a good bullshit detector, don’t you?” I think the people around the protagonist kind of force him to do that — people are always kicking him in the butt. I’m probably a lot like that too. I need to get kicked in the ass a lot.

Me goes around putting up signs to re-segregate the city of Dickens. But America is still pretty segregated as it is. He puts up a “whites only” sign at the front of the bus, but hardly any white people take the bus. Are the signs really necessary?

There’s a difference between willful acknowledgment that you’re being segregated, whether it’s self-segregation or forced-segregation. You’re forced to deal with it at completely different levels. A character like Hominy welcomes that panoptic feeling you get of being watched. I don’t read a ton of literary criticism or philosophy, but there’s the old Foucault thing of what happens when you’re always watched, when someone has eyes on you. I’ve never read anybody talk about that in relation to oppression. People talk about it in relation to prisoners, but just in relation to day-to-day, why you live where you live. I’m making all this up as I go along, but all the video surveillance, there’s something to this.

The idea of being watched, people think it’s going to make the system change, but it’s a lot more about the individual. I don’t want to equate signage to video cameras — that’s two different types of observation — but even traffic signs imply consequence. It changes your behavior. I’m from California, and when video car chases first started on television, the cops would just beat the shit out of the guys when they caught them. But once the cops figured out they were being watched, they didn’t end the chases that way. Being watched, whether it’s because you’re in violation of something or because you’re just different, it’s going to change how you act. It’s not just the signage — it’s habit and fear.

When I was growing up, I would go and visit my girlfriend at the time in junior high — she lived in Westwood. The cops would stop me and tell me, “You don’t belong here, get the fuck out.” I would say “No,” but I would lose that argument. There were no signs, but I learned there were definite signs there.

Dickens is such a particular place, but definitely rooted in some strange Los Angeles history. Did you do research for that? How did you decide to set it in this farming community in the middle of the city?

There’s a neighborhood in Compton that’s zoned for agriculture. I didn’t go to Compton very often growing up, but whenever we drove through there you’d always see people on horseback. It stuck with me. Calfornia’s weird. It’s sort of agrarian in parts, there’s a lot of these old remnants of the Wild West. It’s strange to have that remnant in Compton, throughout all the changes, from white to black to Latino. My sister is a teacher in Compton, and I have a good friend who’s a principal in Compton, so when I would visit them over the years, I would go, “Shit, this is so weird.” I was asking them about it more and more and my sister tells a story of the kids in class buying milk from the next door neighbor. Coming into class with cups of milk straight from the cow. An early decision I made with the book was I wanted to set it in a neighborhood similar to that. I started spending time there, driving around — it was a hard thing to make this city that was based on something real seem so absurdist. I kept writing and I felt like I was forcing it. Beyond what Compton’s known for nationally, in LA, it’s known as just kind of a strange place.

Despite the strangeness elsewhere in your books, they often feature a pretty authentic, understated depiction of being high. No one gets very enlightened.

I think people ascribe more power to intoxicants than they should. In my novels, it’s a lot just to remind readers who these people are.

Your writing seems to have very little patience for political correctness, or people’s motivations for being politically correct.

I’m kind of mocking myself. As a writer I do that all the time. The way people wear political correctness on their sleeve sometimes bothers me. I went to Berlin a long time ago, in 1993, with these spoken-word poets. I had never heard the phrase “spoken word” before. I had no idea what that meant. I hoped that wasn’t what I was doing, I just really hated it. It sounds really politically correct — it’s gobbledygook. It renders something meaningless. But anyways, we were doing this thing at a literature house in Berlin. They were mostly from San Francisco and one of them got up and said, “We’re on the avant-garde, we’re cutting edge,” and just went on and on. I felt like I had to stand up and say, “I think you guys are doing the exact opposite. I think this is the stupidest, safest kind of writing one can do. You put all this stuff out there, and if anyone critiques you they’re a racist or anti-Semitic or homophobic, there’s just no room for error here.” I remember seeing a poet once and her first disclaimer was “I’m from the projects,” and I knew she was begging for a certain type of political correctness. I’m not against political correctness — I am against it being used that way. In The Sellout, there’s a passage about how “the people that want to integrate will integrate.” It’s something one of the worst teachers I had said, and it’s something I always think about.

The main character talks about “proactive” patients asking their doctor, before treatment, “[D]o you really give a fuck?” It seems like such a driving force of the character, asking people to actually care.

I’ve been thinking a lot about the difference between giving a shit and giving a fuck. Or not giving a fuck, I guess. I think that doctor thing is an allusion to people getting pretty shitty medical care. People come in with the same exact problem and get two separate treatments. White people are just getting better stuff. It stems from that — that’s not how I wrote the scene, but it’s an allusion to that, the basic need for someone’s health. I listen to friends’ and relatives’ stories of making the practitioner give a shit. Asking someone to give a fuck about another person.

In 2006, you wrote in Hokum, your anthology of African-American humor, that “there isn’t much to laugh at these days.” Have you changed your opinion? Is there anything to laugh at in 2015?

Not long after that, maybe 3–4 years ago, I started reading internet commenters. And there’s some funny fuckers out there, man. It kind of restored me in a weird way. Forget all the vitriolic stuff, but there was really smart, funny stuff just ending up in comments sections. Silicon Valley is really funny. Veep. There’s funny stuff out there.

The internet has really helped foster some strange comedic sensibilities.

I haven’t seen a ton of it, but Broad City is pretty damn funny. It’s an internet kind of humor. The joke isn’t funny, but their telling of the joke is. There’s something cyber about their approach, the length of the joke, the rhythm of the humor. In a weird way, the humor attention span is expanding. I don’t know if it’s a temporal expansion, but I think the internet is definitely changing the rhythm. It’ll be interesting to see how High Maintenance, when it goes from those short films on the internet to a half-hour show, how its humor will change.

Your main characters always have an encyclopedic knowledge of movies. Have you seen anything recently that you’ve really enjoyed?

I just re-watched Last Picture Show. Damn near perfect fucking movie. I hadn’t seen it in a long time. So I got the Blu-Ray and popped it in. It’s so fucking good. I saw it when I was really young, and I loved it then. It gained stuff now that I’m older.

Is Will Smith still the driest man alive, as you wrote in Hokum? Has he possibly gotten even drier?

I don’t know who Will Smith really is. There’s some dry people out there. Kevin James is really dry. I’m not using dry in a positive way — I’m using it as a pejorative. There’s a ton of really dry people out there. I think Barack is kind of dry. He’s a politician, so it’s the way he navigates, and he might not be dry in real life, but there’s a lot of dry shit out there. Sports are dry. Film is dry. Film is really dry. I don’t see much.
Max Rivlin-Nadler is a founding editor of Full Stop.