My Year with the Canon (According to ETS) 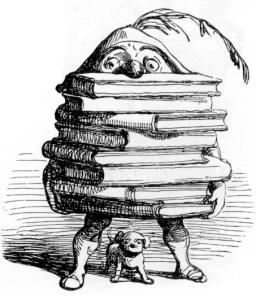 Let me offer one take on the canon that is not my own: that of the Educational Testing Service (better known as ETS, or those b-i-t-c-h-es who design standardized tests like the GRE and its Subject Tests).

The scene: in preparation for applying to graduate school, I’ve spent the past five months studying for the GRE Subject Test in Literature, a beast of a test that supposedly measures how successful one will be as an English PhD candidate according to how much of the canon (according-to-ETS) one has read (and remembered).

My journey through the canon has been an interesting, eye-opening, and mostly enjoyable experience; enjoyable in part because I’ve had a friend to study with — there’s been someone to tolerate my reading Ben Johnson aloud in an affected British accent and to just plain nerd-out with over the intricacies of Donne and the hilarities of Dryden.

But there’s no way we could cover the entire canon in seven months, so how did we decide what to read? We took a two-pronged approach. Firstly, The Princeton Review book for the Literature GRE has a system of “Lists” — A, B, and C — that denote some of the most important works (which works are most likely to appear on the test) that have high “points-to-pages” ratios. These works do not take much time to read and are almost guaranteed to appear on the test — thus, we could earn multiple points without having read too many pages. Our second prong comes from an all-inclusive spreadsheet that my friend had made before she took the test. This spreadsheet measures how likely a work is to appear on the test by — shocker — how many times it has actually appeared on the test, using a five-star, color-coded system. Here’s a sample of the chart:

You get the idea.

Our journey began with a review of the Greeks — Homer, Sophocles, Plato — and Beowulf. As someone who specialized in nineteenth-century British literature, I had never actually read Beowulf, nor many other pre-Elizabethan works like those by Chaucer, Malory, and Langland (I did read Sir Gawain and the Green Knight in 9th grade.) I was wary of this early literature because I had heard it was hard to read and often confusing. Not so! I discovered that Beowulf is totally awesome, and though Chaucer is tough, he’s also quite funny. Gaping holes in my literary education began to be filled in.

I’ve discovered gems that I might never have read if it hadn’t been for this silly test (and I’ve reaffirmed some previously-designated beliefs — I still do not enjoy Thomas Hardy). Paradise Lost is amazing — Milton’s prose is gorgeous, and though I growled at its sexism, the reading experience was worth it. And John Dryden was somewhat of a genius — Mac Flecknoe is a scathing and comic criticism of his contemporaries and society, and All for Love rewrites Shakespeare’s Antony and Cleopatra to adhere to the Aristotelian unities of time, place, and action. And yet before studying for this test I had never heard of Dryden. I wonder what happened that he seems to have been left out of the canon? Some critics make the argument that the more prolific, yet just as great writers get pushed out of the canon by writers who wrote one or two memorable works. This doesn’t seem fair to me — Dryden produced a lot of important works in the seventeenth century, and his stuff is good. Why has he fallen into obscurity while poets like Robert Herrick and his ridiculous “Julia poems” remain?

Passing chronologically through the canon also allows for literary trend-watching — who knew dream visions were such a popular point-of-entry to works in the sixteenth and seventeenth centuries? I forgot how young the novel is until I found myself wading through poem and play after poem and play up until the eighteenth century — “when will we get to some prose?” — my brain wailed.

Despite all the questions of canon formation — who decides what goes where and how and why — and despite the fact that I have done all of this reading to study for a silly test, this epically extended study session has ultimately been a wonderful journey in self-education. Whether or not I ace the GRE Subject Test in Literature in April, in the past five months I have gained an invaluable amount of literary knowledge and perspective on the canon (whatever it may be).