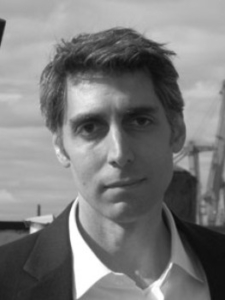 Alex Shakar’s latest novel, Luminarium, was released in August 2011. He is the author of one other novel, The Savage Girl, as well as a collection of short stories, City in Love.

None. Writers may, depending. But it goes beyond responsibility. I don’t think writers can help but write from their historical context, no matter how far removed from it their ostensible subject might be. And similarly, a good book for me is a book that shows me something about how people are enmeshed in their world.

No. Of course from time to time I try to imagine how various readers will encounter my work. But we writers only start to encounter definite readers after publication. With Luminarium, what’s been surprising and for the most part marvelous for me to see is how many angles and perspectives people come to the book with. An aspiration was for the novel to anticipate people coming to it with all kinds of beliefs and opinions — theism and faith, atheism and doubt, ideological opinions of every stripe — and for all to have their views challenged and deepened and transformed a bit by the end. Good literature has a way of holding up a mirror to whoever picks it up (whereas bad literature, I think, proselytizes to definite audiences). In the best case, a book’s audience is always changing and always yet to come.

My gut sense (really, more of a feeling than an intellectual theory) is that the audience for serious prose literature is still growing in absolute numbers because the population as a whole is exploding. But that it’s shrinking as a percentage of people and mindshare. So novelists are in the strange, free-floating state of being perhaps read more and less central at once.

Reviews and literary coverage are more isolated in that if you’re not looking for them you’ll never see them. And less isolated in that more people are empowered to review. I’m grateful to all who take the time to read and discuss my work.

I teach as well. Most novelists I know have a sidebar.

Great literature shows people the frames they live in so they can peek out and possibly break free of them on their own. The problem with individualism as it’s usually conceived these days is that it’s another of those frames, a particularly thick one in which we’re so locked into we often don’t see it. Literature is about both freedom and belonging, about reconciling the personal and the universal.

I’m aware of the debate about whether or not literature should be political. I find it a pretty shallow one.

I see writers as having been fairly engaged over the last decade, grappling with the state of things and avid, sometimes desperately so, for meaning. As Fred observes (with some resentment — he’s got his own issues) in Luminarium, the 9/11 novel became something of a national pastime in recent years. Fred, and Luminarium itself, starts to look at the tendency itself, the hunger for meaning, the attempts whether noble or callow to spin, appropriate, bolster one’s ever-threatened sense of self, amass beliefs like money in the bank. People think that spirituality is about beliefs, but it isn’t. It’s about looking, as deeply as possible, into the believer. If literature has a function, for me, this approaches it.

This was certainly on my mind. Fred’s company, a utopian virtual world for children that gets transformed into a virtual military and emergency-response training ground is the main prism through which I was looking at the war. Writers work holographically, I think, in the sense that holographs are recursive, the parts reflective of the whole. We find small stories the illumination of which hopefully sheds light on the larger story. The part I was looking at was the American immune response — the Military-Entertainment Complex. But the larger reflects the smaller too, and what was fascinating for me was how Fred begins to see the warpages of military-entertainment on increasingly small, relational, personal levels, until it becomes a metaphor for something altogether more pressing than even the state of the world.