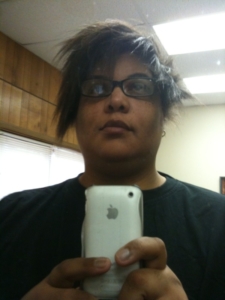 Roxane Gay is the author of Ayiti, which was published in October by Artistically Declined Press.

Literature has a responsibility to respond to the world we live in — the good and the bad, upheaval and calm, matters foreign and domestic. It’s narrow to think that protest and upheaval are inherently more deserving of a writer’s attention than everything else.

I don’t write to a definite audience though my writing probably has developed a definite audience. Popular wisdom has it that the audience for “serious American writing” has contracted but I don’t necessarily think that’s the case. I have no evidence either way but people do read. There are just some of us who disapprove of what people read because it’s not “serious” enough. Of course, the phrase “serious American writing,” is problematic. The definition is mutable and ten writers or readers will have ten different definitions of what such writing looks like.

I respect the thoughtful criticism my work has received. As a writer, it’s always nice to know there is an audience engaging with your work, even if they aren’t engaging with the work the way you hoped. Literary criticism is definitely becoming more democratic and less cultish and that’s a good thing. The quality of literary criticism, though, is uneven online. A lot of it feels careless and lazy but that’s the nature of the Internet — it is not exactly a medium that demands considered reflection. There’s a lot to be said for the quality of criticism that used to dominate literary magazines and supplements. The great news is that there are many online venues that are committed to thoughtful, deeply engaged criticism, like the Los Angeles Review of Books, Bookslut, Smart Set, The New Inquiry, and on and on. I also love sites like Goodreads. The people there are extremely thoughtful in how they engage with books and I love how Goodreads makes it possible for anyone to share how they feel about the books they read. What matters most is that people engage with reading. How they do it is not so much my concern.

Not even a little bit. I have a full time job. A sad fraction of my income comes from writing and I’m one of the lucky ones in that I do make some money from my writing. There should be a place in our current economic system for literature as a profession but that place grows increasingly narrow. Hopefully such will not always be the case.

I really am not qualified to say… Often times I get the sense that writers like to avoid being political. Earlier this year, I wrote an essay where I said that the very act of writing as a woman is a political act and I believe that. Until a couple years ago, I was, myself, decidedly apolitical but I’ve gotten older and my priorities and interests have changed and now some of my writing is explicitly political.

My writing is lots of things but more often than not, the stories and essays I write reflect an allegiance to women and the concerns of women. A lot of my writing is an expression of who I am. I draw from my experiences heavily and shamelessly and if you read my writing you will know at least something about me.

My opinion on the war on terrorism is really irrelevant. All too often, we minimize a huge issue into a soundbyte. I mean, really… war is never a good thing. It’s hard to have an opinion on war. Who would say that war is a good thing? That said, sometimes, wars need to be fought. The current, ongoing war, is one that was started for terrible, mendacious reasons but we cannot change that. We need to deal with reality and not impossible revisions of the past. I am not qualified to make some grand pronouncement on the war. There are real lives involved. There are grotesque sums of money involved. There are tenuous international relations involved. It would be frivolous and, frankly, irresponsible for me to spout some liberal nonsense about something where so much is at stake.

The obsession that some people have with insisting that writers write about war drives me absolutely crazy. You see the call for such writing from all kinds of editors and thinkers. I personally have no idea how to write about war and I have very little interest. This does not mean I am not mindful of the war. It does not mean I am apathetic. It means I do not have anything to say. The reality is that this war is still, relatively, new. This war and its effects will find the voice it needs and deserves. We have to be patient.

As writers, our responsibility is to write true stories, however we choose to define truth. We’re responsible for not forgetting that there is a war, that there are unacceptable casualties on both sides, and that the war started in a very corrupt way. We are responsible for writing about the war, if we so choose, in the best ways we see fit.