You Deserve Nothing – Alexander Maksik 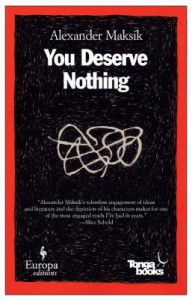 The plot of Alexander Maksik’s You Deserve Nothing is familiar: star literature teacher (It’s always literature or music) moves students, inspiring them to rebel against their parents in ways advocated by Harold Bloom’s Western Cannon. The students start to accept that their parents are a little weaker, a little more complicated, than they had realized a few summer’s ago. And there’s a modicum of low-level violence. A momento mori. And sex. And politics. And then the semester ends. H.A.K.A.S.

In other words, a general outline of the novel sounds, on its face, a little worn-thin. And, on its face, it is. Any novel that takes place at an English-language international school in Paris, shifting perspectives from shy male student Gilad Fisher, to sexually blossoming Marie de Clery, to the superstar teacher Will Silver, is going to be a minefield of cliches. The central power-dynamic itself — teacher seems superhuman then is revealed to be a normal human — is, well, boring. But that makes it all the more amazing when Maksik somehow pulls it off.

It isn’t interesting that Marie De Clery and Will Silver have sex. Teachers and students doing it has been banal for thousands of years. But the total lack of an objective experience within the text is interesting. Marie sees the relationship differently than Will does, who sees it differently than Marie’s friends do, who see it differently than the school’s administration does. And the inability to share anything resembling a unified experience is both what makes this book interesting, as well as what tests the ideological strength of the Modernism that this book relies so heavily on.

It isn’t interesting that Gilad Fisher’s dad beats his mom. What’s interesting is the way that violence itself plays a role in Gilad’s disillusionment with the male authority figures in his life. On the one hand, his father disappoints because he beats his mom. On the other hand, Will Silver disappoints because he doesn’t fight back when a young man pushes him down and spits on him during a political march. Gilad’s mom disappoints because she doesn’t fight back when her husband is abusive. Gilad begins to loath himself for not stepping up to his father. It’s this strange amplification of people’s weaknesses that strikes me as a realistic and particularly teenagerish way to interpret motivations.

It isn’t interesting that Will Silver is trying to pull off a third-rate Dead Poets Society. But it is interesting how true to life the dialogue from the classrooms scenes is. Maksik certainly has his “types” down. There’s the inarticulate and emotionally frustrated bro. There’s the hippie girl. There’s the suck-up. There’s the religious kid. I remember them all, well. And the subtle emotional curves of a classroom discussion with a great teacher are way too realistic for Maksik to ever deny having been a teacher himself. There are emotional backwaters here that I haven’t explored since my senior World Literature class.

So finally, despite Will’s lessons to his students from Camus, Hemingway, Faulkner, and Sartre, the saddest lesson of all, the most haunting, is always your failure to live up to other peoples expectations, not to mention your own. And the irony is apparent: How can a book succeed when its goal is to show the failures of existential books in teaching practical wisdom? Somehow, it does.