The Book Club is a regular feature in which Full Stop editors and guests discuss a book in depth over the course of the week. This time we’re reading The Marriage Plot, a new novel by Jeffrey Eugenides and published by Farrar, Strauss and Giroux. We’ll be discussing all week; catch up on Monday’s and Tuesday’s posts, and check back tomorrow for more. 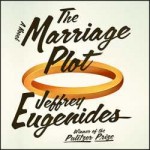 I didn’t expect to be a cheerleader for The Marriage Plot. I read The Virgin Suicides when I was a mopey, depressed high school student in the early ’90s. I loved it, but I was supposed to love it; that book is like catnip for a certain kind of sad suburban teenager. Later I read Middlesex, which I hated with a passion, from its eye-rollingly obvious title, to its self-satisfied, unchecked, overly cutesy flights of fancy. When I first heard of The Marriage Plot, I think I might have actually groaned out loud. Ivy League graduates coming to terms with things? In the early ’80s? I thought there would be no chance I could identify. I dropped out of college in the Clinton administration; I went to an agricultural state university in Texas where the English department hated theory more than anything except then-Governor George W. Bush.

But God help me, I couldn’t put it down. I fell in love. It happens.

I think the title has thrown us all for a loop. As for my take on it, I can’t phrase it more intelligently than all of you have, so I’m going to steal a quote from Eric Jett, who argues that the book

does not explicitly devote much space to the convention of the marriage plot, but I do not consider this a failure. I think the fact that the Victorian ideals are confined to the books, no matter how much people like Phyllida, Madeleine’s mother, try to preserve them, is a commentary in itself. To me, it says that the customs we use to recognize love change, but the passions that underpin those customs are constant.

I agree, and I think this explains Eugenides’s decision to set the novel in the early ’80s. I’m a little too young to remember the era, but it was an undeniably odd time, particularly for American sexual politics. It was only a little more than a decade after the Stonewall riots, after Roe v. Wade; just a few years after the swinging/”wife-swapping” mini-craze. The country had just elected its first divorced president, Ronald Reagan, who would soon get to work ignoring the developing AIDS crisis, and reversing the civil rights gains made over the years by women and LGBT Americans.

Like Eric writes, “the customs that we use to recognize love change,” and the change would have been particularly confusing and exciting for young intellectuals like Madeleine, Leonard, and Mitchell, who grew up in that awkward sub-generation that wasn’t quite old enough to participate in the first sexual revolution. (In her song “Summer of Drugs,” the singer Victoria Williams aptly described the babies of the early ’60s as “too young to be hippies / missed out on the love.”) All the old rules were gone, but nobody had bothered to make new ones. They weren’t the first generation of lovers who could make up their own “marriage plot,” in other words, but they might have been the first who had to.

I think that sudden obligation is at the heart of The Marriage Plot. The book begins with “To start with, look at all the books,” before a litany of the volumes on Madeleine’s shelves, the ones that she’s afraid make her look “Incurably Romantic.” But it’s only a few pages later that we leave her bedroom, and go to the cooler-than-thou indie coffee shop, with the guy with Elvis Costello glasses, the girl with pink hair, Billy Idol playing in the background. And it’s obvious at that point that she doesn’t fit in — not with the sentimentalist, Austen-worshiping, young idealists, and not with the post-punk nihilists in thrall to Barthes and his crowd. (That Barthes sort of plays a role in bringing Madeleine and Leonard together feels like one of the great jokes of this novel, or at least to those of us skeptical of the author’s quasi-post-structuralist writing.) She wants to believe in love, but she wants to fit in, at least initially, with the black-clad, clove cigarette-smoking set that form her school’s undergraduate intellectual elite (such as it is).

It’s perhaps significant that Eugenides chose to use the phrase “Incurably Romantic” to describe the books in Madeleine’s room. She wants to be cured — or, more accurately, she wants to cure herself. And of course it doesn’t work — even if there were a medicine, like the one Leonard is forced to take, she probably wouldn’t use it. She wants to be someone else, but she doesn’t want to give up her self. And so she makes her own marriage plot. It sounds risky because it is, and it sounds familiar because anyone who’s ever been in love has had to do the same thing.

It doesn’t always end well. It doesn’t here, of course. Maybe the reason that it’s easy for some contemporary readers to dismiss the Victorian marriage plot is that — like A Lover’s Discourse — it starts with a lie. Austen and Barthes had one thing in common: When they wrote about relationships, they forgot to account for real love, and they forgot to account for people. They’re both fantasy writers. Eugenides, at least in this novel, is something like a realist. What happens when you fall in love, and your hand is forced, and you’re forced to come up with your own plot? That strikes me as the central question of this book. It’s safe and easy to stay locked away in a library, but sometimes you have to come out. Sometimes you have to deal with other people’s feelings. Sometimes you fall in love. Like I said, it happens.

Michael, you describe The Marriage Plot as a 1980s period piece, evoking a time when, as you nicely put it,  “all the old rules were gone, but nobody had bothered to make new ones.” I agree that the novel is much more an evocation of a time and place than it is a gloss on the history of the Anglophone novel. But when you praise Eugenides for his realism, I think you have it backwards. Austen wasn’t a fantasy writer who forgot to account for real people—her great contribution to the novel was that she was among the first to put real people in—and I wouldn’t dwell on the point if I didn’t think Eugenides’ characters, by contrast, were so damn phony.  They’re not real people, they’re blueprints for characters that were never filled in, and it’s as though Eugenides had left all his calculations in the margins for how the reader is supposed to respond to them.  This is a novel about journeys, in the most tedious sense: Leonard goes mad; Mitchell goes to India; Madeleine gets married, gets divorced, and gets into graduate school.  And if the journey is about coming to terms with open-endedness, as Michael and Eric rightly point out, then the brittle characterizations leave little to hang that experience on.

This scene in which Madeleine and Leonard trade sexual fantasies—it takes place on the Cape, where Madeleine has followed Leonard to his biology fellowship the year after graduation—offers a pretty good example of what I mean:

…Being pampered wasn’t really her secret fantasy.  Her secret secret fantasy was something she’d never told anyone and could barely admit to herself.  It was this: whenever Madeleine masturbated (this was hard in itself to confess to) she pictured herself as a little girl, being spanked.  She didn’t know why she did this.

When Leonard takes this information at face value and, against her will, starts spanking her in bed, Madeleine tells him to stop:

She was furious with him now.  She told him he was gross.  She struggled to get up.  And right then it happened.  Something broke open inside her.  Madeleine forgot who she was, and what was nice.

This is the cutesiest little fetish scene I’ve ever read, but I think we’re supposed to be impressed with Eugenides for being willing to “go there”—into the bedroom with this young woman and her not-nice orgasm.  Instead, this passage shows just how prude Eugenides’ imagination is, because it’s about as far as he goes to suggest Madeleine’s depth, not as a person (she’s fairly shallow) but as a character full of the kinds of contradictory, urgent, unconscious desires and motivations that sexuality can reveal. Sure, Madeleine and Leonard have a lot of sex—much is made of this—but sex never fills out Madeleine’s character. (What do we learn from the spanking scene? That while Madeleine clings to tidiness and order, she gets off on losing control and being punished for it? Didn’t we already know this from her attraction to Leonard, whose manic-depression shuffles him between a demure, pet-like helplessness and an inspired, virile wildness?)

Madeleine might be squeamish, but Eugenides is squeamish about Madeleine.  He insists upon her emotional inadequacy to such an extent that you can’t ignore that he doesn’t like her.  There’s no Nietzschean darkness for Madeleine, no Kierkegaardian leap of faith, as there ostensibly is for Leonard and Mitchell.  Eugenides doesn’t think Madeleine is deep enough for it, and she’s not—she never gets to explore her perversity (there is to be no repetition of the spanking, we are told) or even her more complex and less gracious motivations, so she comes off as blindly, exasperatingly manipulative. She forgets, for a moment, “what was nice,” but she can always go back to it, to her parent’s money and their shabby, boozy, comfortable gentility, where Wednesday is “clean sheets day,” lawyers annul marriages to unstable guys like Leonard, and order and rationality prevail.  And she does.  Even as Eugenides shows Madeleine resisting this life, he gives a portrait of a woman who is on some level uneducable.  She becomes an academic, but did we ever believe she was an intellectual?  Doesn’t Eugenides clearly prefer Mitchell’s course: turning down graduate school to face the great existential unknown?  He and Leonard are the real intellectuals of the novel, as well as its heroes, and we’re supposed to like them as much as we don’t like Madeleine.