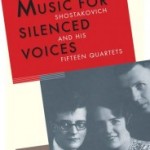 As a young violist in high school, I loved playing chamber music. It was easier to read, easier to interpret, more intimate than the panoply of voices in a symphony. I particularly loved the Romantics—Brahms, Dvořák, Borodin. Such grandeur of feeling. But the composer whose darkness and turbulence, even violence, seemed like a refuge for the teenage soul in its unsteadiness, was always Shostakovich. I suppose the pervasive sense of oppression in his music spoke to a teenager’s natural sense of oppression and scrutiny. Of course, Shostakovich’s sense of oppression came from the constant scrutiny and pressure of a totalitarian regime—a teenager’s comes from the sense that the whole world is a totalitarian regime.

Wendy Lesser, a quiet giant of the world of criticism, most recently turned her far-reaching curiosity on the chained genius. In Music for Silenced Voices, she gives us a biography written within the narrative framework of his fifteen quartets. Lesser’s premise is that the quartets are Shostakovich’s truest music—that they are “a kind of ‘diary’ that records ‘the story of his soul,’ as his widow puts it—they offer unparalleled access to the composer’s inner life. This is not hard to accept about a man living under the Stalinist surveillance machine, whose symphonies and operas could raise their author to glorious heights or sink him into misery by their perceived nationalist content.

Lesser’s credentials are those of a literary critic. She tells us early on: “In speaking about Shostakovich’s quartets, I have sometimes borrowed from the languages of literary and art criticism, both of which have a stronger tradition of impressionistic response than one usually finds in academic music criticism.” Lesser transplants her method of inquiry and analysis from these traditions, frequently using comparisons with Russian literature in particular to read Shostakovich, to guess at what is behind the mask of this man who mastered deception and irony in his art and in his life. Sometimes this method has better results than others.

Lesser builds her evidence piece by piece, often walking the reader through the process quite slowly before coming to her point. She is the thorough researcher here, making considered and careful presentation of her facts, commenting on the mystery and emotional embeddedness of Shostakovich’s life. Her careful compiling of information and straightforward presentation can feel plodding: “We know from literature—not just Russian literature, but also Dickens and Shakespeare—that sadness and humor, tragedy and satire, can often go hand in hand.” Yes, we do.

But Lesser’s project is to show how the quartets serve as the voice for a man, and by extension a people, forced into silence and false speech by political conditions, and she shows this well capably. Her crossover appearance as a musicologist yields some striking moments. In one passage, Lesser reads Shostakovich’s last quartet with Chekhov’s story “The Black Monk,” and comes up with this passage that left me momentarily breathless:

I am not sure how thoroughly the analogy between ‘The Black Monk’ and the Fifteenth Quartet holds up; what I am sure of, though, is that both works are very pointedly and upsettingly about the way death casts its shadow back over life. The sense we get from the Quartet No. 15, as from the Chekhov story, is that everyone is finally alone. Even when we are paired, as two instruments sometimes are, we do not walk the same path at the same time but are forced to wander separately. We cannot save each other. We cannot even keep each other company beyond the grave. But we can mourn each other. And something of us survives death—not the body, not the soul, not anything that can make the individual feel it is alive, but some trace of ourselves in the minds of others and in the world we leave behind. This vague consolation lends life a sweetness but also a sadness, because you cannot remember and treasure the dead without reminding yourself of their absence.

In passages like this one, Lesser’s empathetic ear comes out, and the scale of her project, her self-designated amateur’s approach to this work, makes an impression. (Listen to the quartet, and see if you can come up with a Chekhovian reading this good.)

Music for Silenced Voices is partially an account of one person’s engagement with a body of work, and a kind of inquiry, with which she was unfamiliar; partially a scholarly attempt to illuminate the life of an artist whose work’s meaning can feel apocryphal. Lesser’s efforts leave us with a solidly researched glimpse into a body of work wrought with pain and shame. If the results of her inquiry don’t quite shine a brilliant light into the corners of Shostakovich’s labyrinthine artistic consciousness, they at least lead us capably towards those darker crevices and show us how to close our eyes and listen.