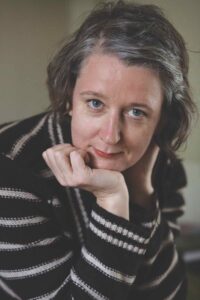 In her fourth novel Unsettled Ground, award-winning author Claire Fuller has readers tethered at the heart. Unflinchingly raw and brimming with compassion, Fuller’s novel features a pair of unforgettable twins living on the margins of society and working tirelessly to restore their lives after the unexpected loss of their mother. What follows is a tale of equal parts heart and immense hope, told in luminous, singing prose.

I had the pleasure of interviewing Fuller over email to discuss her interests in music, ownership, and how she created the truly remarkable Seeder twins.

Megan Kakimoto: You are so deft at toeing the line between the tragic and the comic. Jeanie and Julius are absolutely put through the wringer throughout the story, yet in moments of intense trauma, the twins often respond with light-heartedness and humor. What is it about this tonal balance that you’re drawn to? And how do you approach maintaining that balance?

Claire Fuller: I am mean to them, aren’t I? I was trying to show that when Jeanie and Julius are together, and they’ve been together for so very long, they sometimes almost think as one person. They have such a deep level of understanding of one another that there are many things they don’t need to say — even with half-spoken ideas, the other will implicitly perceive what is meant. And this works with their own particular humor, too; for example, in the scene where they have to dress their mother’s body. But when the twins are apart and dealing with trauma, with Jeanie especially, the humor leaves her and in fact she is unable to take in what other people are saying or to even express herself properly. Creating a balance was really down to knowing my characters completely and then letting them act and speak naturally together — almost as though the dialogue is a kind of ad-lib between them, although of course it’s tightly controlled.

I was moved by the strong compassion you have for your characters throughout their hardest hours. Was it difficult as a writer to see your characters suffer such immense losses, and did this subject matter affect your writing process at all?

That’s a hard one to answer, because of course I create their hardest hours and immense losses. But because I’m very close to my characters, I think I do have to feel at least part of what they’re going through for it to come across on the page. All the protagonists in my novels have faced some kind of difficulty, and aside from feeling the emotions they’re feeling, it doesn’t affect my writing process. Rather than a loss, it was Jeanie’s difficulty with reading and writing which affected my writing the most. Reading and writing is fundamental to who I am; it is what I do for a living, and writing a character who can’t perform either of these tasks easily was one of the hardest things I’ve had to write. To create a character, I try to think like they’re thinking, but it was difficult to write someone who is unable to do something I have always taken for granted. As I wrote Jeanie’s scenes, I kept forgetting that she can barely read or write, and it was when Jeanie started using workarounds to hide her deficiency from her neighbors, that a door opened for me, and I understood what life must be like for her.

How did you come to the decision to alternate the close-third points of view of Jeanie and Julius? What do these changing perspectives afford both the novel and its readers?

This is a good question. I had to return to the diary I keep when I’m writing a novel, and at around 12,000 words, I wrote, “Had a little dabble with first person, and dismissed it.” Somewhere in between that point and 33,000 words, I seem to have decided to have some scenes from Julius’s point of view, but I didn’t record when or why. Writing for me is very much about feeling my way: Does this work? Or that? Or how about this? Oh, yes, this is right. And then when it seems to flow, I go with it. Unsettled Ground was always going to be Jeanie’s story, it was just that Julius wanted in on it, too. I hope that having a little of Julius’s point of view will help the reader see not only how much he loves his sister, but also the duty of care he feels towards her; then, after his mother’s death, he also sees what else the world has to offer. The fact that Julius is pulled one way and then another is what puts him in the wrong place at the wrong time. I also hope that seeing Julius’s point of view will tie readers to him a little more strongly, which is important towards the end of the novel.

The Seeders feel absolutely inseparable from their garden, and from the surrounding landscape as a whole. Place, in fact, feels inexplicably linked to character. How do you see the role of gardening and planting functioning in this work? And does the consideration of place factor into your writing process?

Place is one of the most important parts of my novels. The inspiration for all my novels comes from a particular place. With Unsettled Ground, it was a vandalised and desolate caravan (a camper trailer in the US) which I visited in some woods near to where I live. In this novel, place definitely informs character. (For example, Jeanie and Julius are the kind of people they are because of having lived in a cottage without heating and with an outside toilet.) But also, characters inform place. (The cottage is as it is because of the kind of people Jeanie and Julius are — people who won’t ask for favours or help.) So, yes, the Seeders are inseparable from their garden and the landscape (the North Wessex Downs in England). They have grown in this place, they have been literally created by the food they have grown in the garden, and the chickens and rabbits they’ve eaten. To move from the cottage and its garden, for Jeanie especially, is a metaphorical and actual uprooting. But Jeanie’s gardening ability also shows she is highly skilled even while the traditional school system has failed her.

Like gardening, the Seeder twins also find solace in their music. I was so taken by the compelling way you portray music in a written medium, which is incredibly hard to accomplish. How do you approach writing about music, and what do you see the role of music playing in the Seeders’ lives?

Creating one medium in another is difficult, especially using words to describe music. (I think music can much more easily create pictures in a listener’s head.) To try to get it right, I listened to the music in the novel over and over — thousands of times over the course of the two years of writing. I’m not a musician, but my son is an acoustic guitarist — as Jeanie is — and he and I had lots of conversations about playing music, and I watched him play also for many hours. Some of his lyrics are in the book. (And readers can listen to his music at www.henryayling.com.) As with the gardening, music in Unsettled Ground firstly shows that Jeanie is much more skilled than she might first appear, and secondly it is there to lift what might otherwise be a bleak novel; to provide some lighter moments for the characters, the readers, and for me when I was writing it.

After moving into a small piece of wasteland, Jeanie comments to her brother: “Everywhere is owned by someone.” This sentiment feels deeply rooted and explored throughout the text. What about this question of ownership fascinates you as a writer?

This for me is about homelessness and rural poverty and how for those people who rent their houses and exist on a hand-to-mouth basis, life can often be precarious. Jeanie and Julius live in this way, while other characters in Unsettled Ground own an ex-council house or have bought their house with some money their father left them. Julius believes they can make the caravan in the woods their own, but Jeanie, who longs to get back “home,” knows that the caravan is no more secure than the cottage they were turned out of. I hope that readers might think about their own — probably more privileged — situations and how easy it is for things to go wrong, even for those who consider their financial and housing situation to be secure.

Without giving too much away, the ending revelation about Jeanie and Dot left me feeling sideswiped. At the same time, I feel like you’ve cultivated this ending from the moment we meet Dot and learn of Jeanie’s health condition. How did you achieve this delicate balance of both preparing as well as shocking readers with the ending? Were you aware of how the book would end early in its conception?

I had no idea how Unsettled Ground would end. I’m not a writer who plans the story — I write to find it out. But of course, once I’ve reached the end of the first draft and I know what happens, I then spend about six months editing and laying in clues (or removing them), to try and achieve that balance. For close readers, all the clues are there in the first chapter, so for me this isn’t a book that’s necessarily about a shock for the reader (although if they are surprised, that’s great!), but about a feeling I’m trying to create in the reader that something is coming. They might guess what it is, or they might only suspect it at the moment when Jeanie learns it. Either is fine. I find though, that this is the hardest thing to get right: how subtle or heavy handed am I being? I know what’s coming by that stage, so it’s impossible to try to be a reader reading it for the first time. The only way to judge whether I’m getting the level of subtlety right is to ask trusted readers to read it when it’s still in manuscript form. Luckily, I’m in a wonderful writing group with people who do this for me, as I do for them. 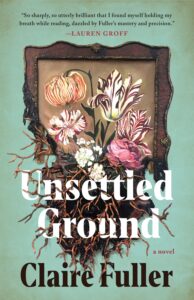 Megan Kakimoto is a short fiction writer based in Honolulu, Hawaiʻi. She is currently a Fiction Fellow at the Michener Center for Writers. Her work has been featured or is forthcoming in Boulevard, Conjunctions, Joyland, and elsewhere. Follow her on Twitter @megankakimoto.

Bride of the Sea – Eman Quotah