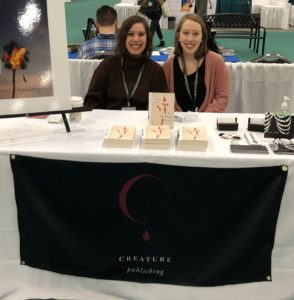 Creature is a feminist horror press. Founded by Amanda Manns and Olivia Batker Pritzker, their first book, a new edition of A Phantom Lover by Vernon Lee originally published in 1890, was released in February of this year. It is always exciting to see a new independent publisher enter the ring, and even more so when that publisher’s first book is something as stylish and mysterious as A Phantom Lover. I emailed with the press’s founders to discuss this new venture and why they chose Vernon Lee as their first author.

Kyle Williams: Can you tell me a little bit about what made you two want to start a small press?

Amanda Manns and Olivia Batker Pritzker: We feel strongly that small presses not only serve as homes for interesting works that authors are already writing, but that they can also be platforms to spur the creation of works authors might not have thought of yet. While we worked together as editors at another press, we discovered a shared vision for a niche publisher which focuses on works of feminist horror—a genre beginning to take shape, but with much room to grow. There has been a new wave of “social commentary horror” in both film and literature in recent years, as well as women writers using horror tropes to tell their stories. We are both excited by the examples of this we’ve seen—Carmen Maria Machado, Jac Jemc, Helen Oyeyemi; films like Get Out, Midsommar, A Girl Walks Home Alone At Night, etc.—and saw a space in both the small press world and larger book market for horror writing in conversation with feminist issues. As horror has been a traditionally white male genre, we want to address the gender imbalance and lack of diversity in the genre.

Is there a story behind the name “Creature”?

We love the idea of books being live, sentient beings that have desires, agendas, anger, etc. The spine illustration on the spines of our books speaks to that sentiment of books being living, forceful entities capable of inspiring fear, passion, anxiety, dread. The name is also a nod to the content of the genre itself. Horror is full of creatures, human and nonhuman and all things in-between. And there’s a certain playfulness to the name—while we’re interested in serious horror, we can go for something campy, too. We want our list to ultimately be a “catalog of creatures.”

What does “Feminist Horror” mean?

Our definition of feminist horror is both broad and inclusive. The books we publish must exist in both spheres but we are looking for a wide array of things within those spheres. Literary body horror, critical essays on our society’s obsession with dead women and girls, an exploration of a couple’s relationship through a haunted house narrative, a teenage girl who becomes possessed by, not a male demon, but a female goddess who helps instead of hurts her (coming soon from one of our authors!)—these are all examples of work that could fall under the feminist horror umbrella. Put another way, it is storytelling which uses horror tropes to examine feminist issues.

How did you discover Vernon Lee, the author of your first release?

We researched lots of pioneering women horror writers, spent a fair number of hours at the New York Public Library, and, once we discovered Vernon Lee and her supernatural fiction, we were so impressed by her life—and so underwhelmed by the lack of contemporary readership for her—that we knew we had found our first author.

What made you want to republish a text from 1890?

We decided that it made sense for our first book to be a new edition of an older work for a couple reasons. First, we were interested in publishing an early example of “feminist horror,” both to highlight its origins and to show contemporary writers the kind of work we’re interested in publishing. Second, it was an opportunity to showcase an underappreciated and fairly unknown author in keeping with our goal to call attention to lesser heard voices—in this case, a turn-of-the-century queer writer with wide-ranging interests and a radical personal and intellectual life. Although Vernon Lee moved in the same circles as many well-known writers (Oscar Wilde, Edith Wharton, Henry James, and more) Lee’s work hasn’t been as widely read. That should change. Her ghost story A Phantom Lover is, we’d argue, an embryonic example of feminist horror, with many parallels between life for women in 1890 and today. It’s a sly little novella worth an afternoon’s read.