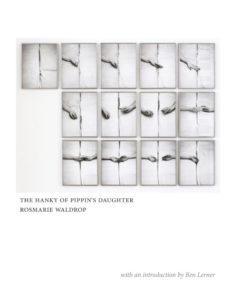 Like the title’s hanky fluttering out of a castle window and settling in some mud, this novel’s narrator flickers about time, space, memory, fact, and conjecture in a playful epistolary form, always stuck on the same thing, or landing there: Was the narrator’s sister, to whom her writing is addressed, fathered by the father they know or by their mother’s lover?

How did the affair unfold and end?

Puzzling over these questions, the narrator, Lucy, writes to her sister Andrea, and though she mentions Andrea’s responses, the text doesn’t read so much like letters. For most of the novel, Lucy presents a writerly narration where she both remembers and imagines her parents’ early marriage in Germany in the 1920s and ‘30s. She becomes an omniscient narrator, diving into scene, and then jumping out to clarify for and comment to Andrea. We learn about them, too, and their other sister. The women are all having some kind of affair, and then so are the men. Their lives weave in and out of short sections, spanning decades and continents. In the background and increasingly in the foreground: antisemitism, the rise of Hitler, WWII.

If you’re new to Waldrop’s work, she has published over twenty books, mostly poetry, but also essays, and she is a translator (Jabès, Celan, Roubaud), a publisher (Burning Deck) . . . many things. This novel was originally published by Station Hill in 1986, and this year has been reissued by Dorothy, A Publishing Project.

The Hanky of Pippin’s Daughter is a very physical book – people are sleeping with each other. There is much talk of penises; both Lucy’s and her mother’s lovers are described as fat, repeatedly; her mother, Frederika, eats a lot and quickly; Frederika climbs out of a car sans panties; the other sister, Doria, is always pregnant; and the father, ever-cerebral Josef, tap-taps his barometer (hello, Proust) and sits strangely erect on his bicycle. Interestingly, Lucy and Andrea, at least in my reading, have little body and are mostly present as writer and reader, not unlike the I and you in many of Waldrop’s prose poems, which, she writes in her introduction to Curves to the Apple, function as syntactic operations. Not people, necessarily, but drivers for language.

This attention to language, and language’s physicality as it makes the novel, is best seen in the novel’s form. Lucy’s writing / narration is not broken up into letters addressed to Andrea, though she says they are, but instead moves in four major parts mediated by sections in space breaks and these amazing all-caps titles / fragments / phrases that sometimes link up to the preceding or following sentence. For example, here’s Lucy on their mother’s desire:

But maybe at the beginning she thought more of sex. The penis in particular.

A REMARKABLE PIECE OF APPARATUS

which conjured up assemblages of valves, weights and counterweights, shafts, pistons, pipes, levers, screws, tubes, plugs. All streamlined and covered in the most modern and yet organic manner. Only the magnetic needle was visible, rising to its true north undistracted by fur or measure or lip service from exploring the interior . . .

In short: an express ride to the sun and moon of

which she had been promised ever since she was a little girl.

(Though it’s not as jarring as this excerpt makes it seem; so as not to reprint entire pages, I cut some of the paragraphs to emphasize the breaks.) What these headings do is whip us around, like a hanky in the wind, both to give shape to Lucy’s thinking and to throw us somewhere else. In the novel’s introduction, Ben Lerner writes that the headings “remind us of the contingency involved in dividing a life into periods; they make us feel, along with Lucy, that narrative is about imposing an order, not just recounting one.” In “Enhanced Density” from her poetry collection Love, Like Pronouns, Waldrop writes

Should it worry me that thought, in my sentences, seems never wholly present at any one moment? Let alone love, in my life? Even my skin has no precise shape, that is unless touched. By clothes?

Lerner attributes the headings and section breaks to Waldrop being a poet. That the cut-up form is “poetic.” I hesitate to agree. (Is that what separates prose from poetry? Continuation or break?) But the writing certainly is poetic, and it’s very Waldrop. Waldrop’s writing is full of surprises, in all of her work, and that is absolutely the case here. I never know how a sentence will turn or what will happen next, despite the narrative being, like memory, quite recursive. Honestly, the novel is a joy to read, the kind of reading where you’re almost smiling? I really think there’s nothing like it. In this reissue, Dorothy – in the book’s 5.5 x 7 in. shape, clean white cover with a Rudolf Bonvie series of repeating, slightly changing photographs of hands reaching across a divide, like Lucy’s looping narrative, a layered history of human interaction – brings the pleasure of Waldrop’s physical prose to the book form itself, making a lovely, lovely object.