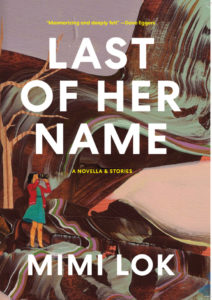 italics direct quotations from the text

True fortune tellers would tell you what will be remembered. Tell you the moments that might become the ones you use to define yourself. It’s never clear what moment might slip away from you at the last second, as though lost in the crowd but maybe you let go maybe you knew what you were doing. Maybe there isn’t a doing, instead merely waiting to see what lasts before determining what’s last; to be last or to become lasting. Wait for nothing to happen again before it can be called something. Find that one can’t recall the last time but is secure in the knowledge that there was an end. Lost connections too frayed to repair but impossible to tell which threads linger.

In Mimi’s Lok’s first collection Last of Her Name published with Kaya Press come intersections always there but rarely pointed at. When hybridity dissolves into a fluidity that is simultaneously alarming and comforting. How can one be a hybrid when you’re neither of either. When the parts of you that are coming and going have come and gone splintered into fragments of a being denoted by neither place nor time. Worlds that are not separable yet continue to be designated as such. One of many things that I enjoyed about this collection was its grounding story-telling while simultaneously opening multiple considerations and connections.

The titular novella ‘Last of Her Name’ draws back to a Hong Kong in 1941 and a history whose residual tremors are felt in today’s quakes. A years later that might never come. Oscillating temporally with England in the 70s and 80s as a reminder of our own manufactured stability, a manufactured preservation. Following a family through their generational folds, a mother and daughter recognize silent echoes as they each come to negotiate with the expectations of the world. It is simple to state that everyone has to come to terms with their own personal negotiations, but it is rare to find such a collection of stories that refuses reduction in favor of an investigation. As we set aside the universal we find in its folds countless demonstrations of how one may manage when all we have is a life. This pluralism finds its representation in the failure of homogeneity and it is through such failure that we may begin to determine our own multitudes.

Places connote belonging but what happens when that belonging is a place of uncertainty? Every space is created through an interaction with an other and in Lok’s stories even solitude finds its space. How much and how little a place matters finds its equivocal nature revealed amongst her stories, all of which circle different subjects while refracting a singular humanity without seeking to ascribe generality. Family becomes those who occupy space together, those who share a name, share silence. Leaving in order to preserve just as often as leaving in order to forget—never know anything beyond a vague, romantic notion of the true extent of the wounds. What happens when we choose to stay still? What happens when we choose to wait? How much of a difference is there?

The stories in this collection confront these notions with subtlety, allowing the reader space to consider while maintaining a wholeful ambivalence. My own thoughts circled the idea of names. How can one be responsible for preserving the name when names don’t really matter. A name easily disappears. Almost. Names become a tie to intimacy as well as a severance; another connection ready to be broken if it was ever there at all. Another resemblance that is neither similar nor alike. Women carry names horizontally, preserving the lives that resemble them, while men carry names vertically through generations. Who is to say what truly lasts. What happens when names are hidden, names for private, names that bear the past in the present if only to make the past last.

I hesitate to recount her stories because part of their beauty comes out of watching them unfold sentence by sentence as the picture becomes never more clear but merely less unknown. The stories do not denounce simplicity, instead weaving it in between panic and patience, another fold amongst the longing for continuity. In every space there is a wavering—the space does not quite fit. We encounter characters watch them navigate choices wonder if we’d do the same wonder how anyone may have done differently. What good is preservation, after all? only survival matters. What is survival without preservation?

Rather than seeking to explicate occurrences and events Lok reveals moments and the act of memory in their natural opacity. To recollect and reminisce upon a past often bears a hallmark of disbelief; how can one now be here from there. How this recollection? And yet every here is a fractured echo of what came before, a splintered refraction of what is to come without ever revealing how or why. “All this effort,” she muttered, “and for what?”

Certain stories stay with you—everyone has their particulars that they become drawn to. In ‘Bad Influence’ watch others find themselves against one another, finding that perhaps self-determination has less to do with the self than initially believed. In ‘The Wrong Dave’ remember all the connections made for the sake of one, that may not have been right or intended or wanted but it’s easier to pretend sometimes. Without knowing it, they take turns watching each other. Inevitably if you think no one is looking it’s easy to feel alone, but it’s easier to make up an audience that cares even less.

Remember lying at night with an arm in a not-so-comfortable position yet eternally reluctant to fix such a cramp for fear of pushing the other away. Maybe if you lie perfectly still they’ll never turn away. Resist the urge to pull anyone closer and instead observe the gaps; the longer she observes, the more gaps she finds, and the more unhappy she becomes. By this time she is more unhappy than she is happy, but as long as she is thirstier than she is unhappy, things might still be all right. In how small or large of a space is it possible to navigate connections, when it’s unclear where any of the connections came from, when it’s unclear what space you belong to.

But in all the stories loss finds you before the story finds its finish. A strange combination of ease and anticipation: seeking to be sought but not found, incapable of locating the words that would carry truth. It is this ambiguity that make these stories such a delight to read. Supposing consistency and culmination create blind spots considered too insignificant to master and Lok’s stories suppress such inclinations in favor of an investigation of interaction and connection, keeping you occupied as you step into another world while simultaneously inciting reminders of the one tethering. With each story the comfort of familiar discomfort a ring of almosts and maybes and enoughs. The touch of another person, even without emotion, was better than nothing.

There is an isolation that is not isolation. A solitude that is not solitude. But what about the feeling in pit of your stomach growling that there’s only you. I was reminded of a saying among Hong Kong’s current protestors;「自己香港自己救 」—, translating to “We alone can save our Hong Kong.” Less a declaration of independence and more of a stark assessment.

How many other people had felt whatever she’d felt? And how many had just felt odd, or nothing at all?

It’s nearly impossible to choose what’s remembered. Lok’s stories negotiate and transgress the limits of the nearly impossible, creating a wonderfully evocative collection for a reader to simultaneously devour assemble, recognizing the absurd in the truly realistic. Realize the stories we tell ourselves sound strange and yet; an unfamiliar trembling. Realize that more often than not we fear being forgotten and yet we are the ones forgetting.

A connection and a severing may take a moment or a lifetime. In Lok’s stories come reminiscences, familiarities, echoes of a feeling that is so varied and yet so specific. Nothing is truly solitary but in the entirety of the web sometimes your own quivers are all that is felt. Stretching out in the middle of the night towards emptiness towards space towards an instinct that there may be more. Sacrifice connection for convenience because forgetting is easy even without intention.

Like memories you don’t know which one of Lok’s stories might stay with you. Which ones might fade slowly but inevitably. Which ones might come to mind unannounced as you wait for the light to change. Which might change with every rereading.

Marina Manoukian is a Masters student in English Philology at Freie Universität Berlin. She likes bees and loves honey. Find more of her words and images at marinamanoukian.com.