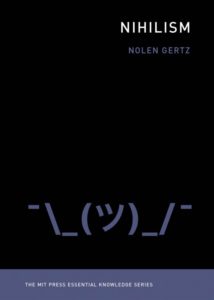 This short book offers an excellent overview of a huge topic. It is also eminently readable. The book does not freight itself with caveats and scholarly prevarication. It is not designed to ward off all possible objections. And it does not continually excuse itself because the topic of the book is dubious: “Yes this is a book about nihilism, but . . . ”

Nolen Gertz stays true to the underlying impulse of the book, which is to treat nihilism not as an enemy — of truth, of civilisation, of morality — that we might locate elsewhere, but as a problem we all manifest. This determination to problematize, to inspect, to submit nihilism to analysis rather than judgement, describes a critical ethos that might be applied more generally. Yet what Gertz does is more specific. He targets something we are supposed to despise, and suggests it is not the enemy we think it to be.

I came to read the book because of my work on cynicism. Though Gertz is quick to distinguish nihilism from cynicism, both originate in the same crisis of western metaphysics. Each came to prominence at a similar time (in their modern usage). And each is subject to a similar dismissal.

Both concepts deserve rehabilitation, or at least extension to areas usually presumed beyond their reach and pure of their influence. This book would have it made harder to invoke the term “nihilist” to dismiss others, harder to identify others as nihilists in such a way that affirms the apparently non-nihilistic credentials of the accuser. Nihilism, like cynicism, is more widespread than commonly assumed. Its accusers are often also nihilists of a sort, though they would not admit it.

What nihilism describes are the effects of living within a collapsed universe. This is not a realm of nothingness where nothing matters and nothing makes any sense. Authority, truth and morality persist. Reason still operates. But what authority cannot gather and secure are the intellectual, affective, and bodily procedures that might render truth final, and secure its domain. Morality remains, truth remains, authorities still exist, and yet they cannot be sufficiently coordinated.

Nihilism may be conceptualised abstractly as a crisis of metaphysics, but it can also be pointed out concretely. Gertz interrogates how we use the term “nothing” in everyday speech: In response to the question: “What have you been up to?” it is common to reply “Nothing.” As Gertz argues, this response is not generally understood to reflect a case of nihilism, because nihilism is “supposed to be something dark, something negative, something destructive.” According to conventional understanding of the term, this exchange cannot be deemed nihilistic in the strong sense, since “saying you are doing nothing” is not taken literally, since “everyone knows that you are not literally doing nothing.” Instead, all that this exchange indicates is that “you are doing nothing worth mentioning.”

Nihilism, it turns out, can be perfectly ordinary. Nihilism refers to the experience of living in a world that cannot, it seems, be justified; of a life that involves so many activities, procedures and expectations that are experienced as banal, habitual, and apparently senseless. Most things we do because that is how they are done.

The experience of accounting for one’s life in response to the question “What have you been up to?” can be depressing. It forces the respondent to contort themselves, to briefly convey meaning upon, and give sense to a life that may not feel complete or meaningful, but ranges between sensations of busyness and listless fatigue. As Gertz points out, what makes this nihilistic is the accompanying feeling (which is also the source of depression) that life should actually amount to something.

This follows Nietzsche’s argument that nihilism is not just the observation that life is meaningless in the grand sense; it is also the reaction to that observation, including the accompanying disappointment. Nihilism is both the recognition that one’s life cannot derive meaning from some external framework, and the feeling that this is somehow unfortunate.

Nihilism is the consequence of the evaluative framework Christianity adopted and developed falling into crisis. To quote Nietzsche: “The time has come when we have to pay for having been Christians for two thousand years.” “European nihilism,” is the debt that must be paid for centuries of divine promises and dreams of a hereafter. These promises helped establish, develop, and deepen practices of self-denial and moralities of diminishment, which remain with us, in secular clothing. These practices continue to inform how we inflict violence upon the self when training it to become a productive, apparently autonomous, law-abiding member of society.

Technology, it seems, helps perpetuate if not worsen the condition of nihilism. The above methods may help prevent “the destruction of society,” Gertz writes, but they do so “at the cost of having worsened our nihilism.”

So the problem with nihilism, for Gertz, is that it is “about evading reality rather than confronting it, about believing in other worlds rather than accepting this one.” It is for this reason that “a philosophy that argues that life has meaning” (the work of Julian Baggini is cited here), “is much more likely to be nihilistic than a philosophy that argues that life is meaningless.” The former, one presumes, is guilty of perpetuating a cycle (the cycle of nihilism) in which meaning is foisted on life in an attempt to make it submit to reason, whereas the latter is more likely to accept that this world, in all its confusion, is all we have to work with. Gertz interprets nihilism as a system of disempowerment by which responsibility for making sense of the world, for deciding what to value and how to act, is always placed elsewhere. The argument is this: By accepting the world as it is, as something that will not submit to the meaning-making activities of an external authority, we are more likely to take responsibility for our attempts to live well within it.

In summary, Nihilism agrees with those who think nihilism is bad, but provokes those who think they have escaped its grasp. Gertz presents the challenge of confronting nihilism as an on-going struggle that the most pious, upstanding critic cannot escape. Indeed piety, and all higher values that produce the impression of having escaped nihilism, merely feature its presence. Nihilism is everywhere. The tools we thought we needed in order to fight it — hope, ideals, optimism — only extend its reach. To escape nihilism, it is necessary to escape all temptations to place responsibility elsewhere, to give up all distractions, deferrals and hopes for improvement. The problem of nihilism is immediate and intractable. We are all nihilists, of a kind. If this book is written without excuses, it is because there is no one higher, or better to make excuses to.

Ansgar Allen writes at the intersections of education, philosophy, and literary theory. He is the author of several books including The Cynical Educator and Cynicism (forthcoming).