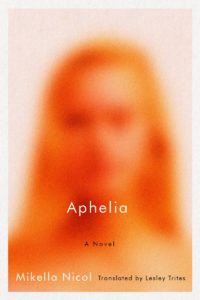 [Véhicule Press; 2019]
Tr. from the French by Lesley Trites

Let’s not call the narrator of Mikella Nicol’s novel Aphelia, translated by Lesley Trites, an unlikeable female protagonist, but difficult: a challenge to be close to, whether friend, boyfriend, lover, or any of the between. Someone likeable, but who gives you reasons to dislike them. Who gives you reasons to turn away, but makes you desire to lean in.

She is a twenty-something woman in Montreal coming to terms with herself, and admitting, “I would have preferred to find another way to paint my own portrait than through my lovers, but I didn’t know how.” Those lovers: her boyfriend, Julien, who mainly exists on the periphery — she’s not that into him, though she loves him; her best friend, Louis, who certainly loved her, maybe still loves; her ex-boyfriend B., who lurks around the edges of the novel and her mindset; Mia, her new obsession, her attempt at moving from men; the bartender who desires her; and that bartender’s girlfriend, Florence, who is her mirror, who must hate her, and so must be hated. None of these relationships could simply be called healthy and positive. Sometimes she’s the better person, sometimes the other is, or both are shitty, or neither is at fault. This novel of relationships is a contemporary thing, with the intimacy, isolation, fucking, flirting, and fighting included.

There is motive to this movement, if difficult female narrators can be called a movement. This is a novel about a woman and her desires. This isn’t the classic unlikeable male narrator: aggressive white men walking about like the world is theirs to act on as they desire, or raging because it isn’t. She is a woman with a past, people acting on her, a woman formed by the world and trying, maybe finally, to act for herself, and maybe who demands selfishness, or maybe she hasn’t found an answer, and selfishness is a test effort. In the midst of that, apathy and desire pull on her. On the opening page, of the bartender: “I was waiting to see if he would try to kiss me, and whether this time I’d let it happen.”

She desires him, but not really, desires being desired, desires desire, never knowing what to do with it. Like many contemporary narrators, she’s self-aware without doing anything about it: “I was annoyed by my own apathy.” Her apathy smothers her ability to make choices: “He held out a fresh beer that I didn’t want, but that I drank.” It isn’t until after we see her flirting with the bartender, meet Mia — who she’ll pursue for most of the novel — and puzzle out her friendship with Louis, that we meet her boyfriend. He’s an afterthought. As, really, are most other people.

The person who isn’t an afterthought, the one person essential the novel besides herself, is Mia. Aphelia’s narrator is enamored with her upon seeing her, and they, ambiguously, pursue each other. They find each other on Facebook, and still, the narrator puts that desire under the guise of the involuntary: “I quickly checked to see if there was anyone I recognized among the crowd. I was looking for Mia without thinking.” That involuntariness, like apathy, is a nicely served excuse for never considering others before acting. Her draw to, obsession with, Mia, is physical, it is emotional, it is outside of her usual habits, her patterns with the people in her life:

I watched Mia’s fingers, deformed through the pitcher of yellowish liquid with slices of lemon and mint leaves. She’d made the tea for me. I lowered my eyes to give her the time to observe the curve of my eyelashes and the freckles on my nose. They came out with the sun and would disappear again come winter. Hers, much more numerous, were there to stay. It had never occurred to me to wonder if Mia was prettier than me. And yet it was normally the first reflex I had with women.

Mia is something new for her. She offers seduction, but safe seduction. (“Seduction is the form of violence I knew best,” true for both seducing men and being seduced by them.) With Mia, the narrator escapes her rivalries with women, and the problems that come with relationships with men. She “liked the waves Mia was stirring in me.” But, in wanting from Mia, in taking from Mia, she never asks herself what Mia wants, what Mia desires, or how Mia desires. She does not know how to be with a woman, how not to want what she wants from men, or how to treat Mia other than how a man may treat a woman. All this involvement of men, or roles, inescapable for Mia, hints at that motive behind why a woman might be a “difficult woman.” Not only have men, in fiction and in life, had their time embracing their own difficulty, oftentimes it’s at the expense of women, and this contemporary thing, this type of fiction, is a reaction to that, a self-elevating response.

Of men, she says “They confused their contempt for me with desire. They treated me like meat, I’d told Louis more than once. He’d responded immediately that it was because I presented myself that way.” Louis, her closest friend, tells her this. When she isn’t meeting with him because she’s chosen Mia, her boyfriend notices, and inquires. For a moment, it’s kind, it’s him inquiring about her life, noticing, but she answers with an easy lie, “I’m tired these days.” Julien is happy to let it end there, accept that his girlfriend isn’t on the cusp of a crisis because her life isn’t working. He wants to do nothing, for her to need nothing he doesn’t already provide. Then there’s B., her ex, who she can’t forget, who she can’t stop wanting in some form, who she also hates, who was violent with her, at least once. Men: some are difficult, some are far worse. So why not be difficult in return, especially when she’s willing to accept, love, men who say things like Louis does, and are otherwise good to her?

So, she pursues Mia. She does not want a woman, physically (she falls “into her neck,” that space where she finds “refuge” with men), but she wants something men aren’t offering, not the bartender, not her male friends, not the men she considers for an evening, not her boyfriend. Her and Mia make their own world, for a bit. They pursue intimacy, and safety. They, or at least the narrator, believe they will solve the case of a missing woman. It’s mentioned briefly at the beginning of the novel, then becomes a game, an obsession, for the two, without the men of the novel showing awareness of the news, this story that women fear. Why would they be? What could a missing woman mean to men? Meanwhile, the narrator sees yet another reflection of herself in the missing woman.

Aphelia is a slim novel, and as with novels of relationships, there are break-ups, there are reunions, there is catharsis, there is the pain caused by others and the pain inflicted by oneself. As these things go, it’s good, it’s interesting, but it’s not the strongest in the genre. Messy, selfish, complicated women seeking openness, if it can be safe and healthy for themselves, are compelling. And there’s room for that now, with Montreal writers particularly embracing it. Just this year, QC Fiction put out both Maude Veilleux’s Prague (trans. Aleshia Jensen and Aimee Wall) and Laurence Leduc-Primeau’s In the End They Told Them All To Get Lost (trans. Natalia Hero), and for the coming of age version, there is Goddess of Fireflies, by Geneviève Pettersen (trans. Neil Smith), while for the death-confronting take there is Vickie Gendreau’s Testament (trans. Aimee Wall). This is of course not limited to Montreal, with the work of both Ottessa Moshfegh and Sally Rooney coming to mind. Aphelia is a book that could upset, though not drastically offend, both men and women. It would maybe be a better read if it could offend instead of upset, if it got wilder with the way it dips its toes into the murder mystery. If it got wilder in any of a number of other ways.

At its best, the voice is wonderful, with quick lines that are beautiful, and are tied to the narrator’s personality: “If only I could have drunk the summer sky,” “because I was rotting with boredom,” “I didn’t talk much with Louis, like all the times when we had a thousand things to tell each other.” At other times, lines land stiffly, too formal, without the messy personality we know: “The actions of the night we shared replayed in my mind,” “I secretly thought about Florence, who was no longer there to reflect my image,” or the word choice just doesn’t work for English, like a man and his “sensual walk.” This is Trites’ first full-length translation, and these hiccups feel like the attempts of an initial translation, not brightened like most of the rest of the novel.

Despite these hesitations, Aphelia is a compelling read. The narrator has a distinct personality within the genre, with her attitude towards other woman, her moments of disgust with her body, which she isn’t inclined to think through the way others might. The exploration of relationships that don’t fit into easy categories, like uncertain pursuit of a same-sex connection by someone who would normally identify as straight, is raw and honest. It comes from a young author and young translator, both women, who are talented, and is set in a city that seems to open these things for people, with small, newer publishers making waves, with translators and authors making debuts at a blistering pace. She’s a bit messy, the book can be messy, life obviously can be messy. It’s not bad to embrace that.

P.T. Smith is a reader and writing living in Vermont. He is the coordinator for the Best Translated Book Award and has written for The Montreal Review of Books, Three Percent, and Asymptote, among others.