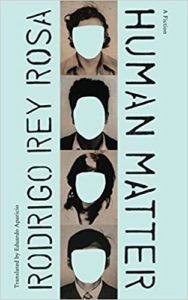 Tr. from the Spanish by Eduardo Aparicio

You might think that the emotional tones it’s possible to conjure with metafictional games are strictly limited. No matter how weighty the material, most overtly self-referential or self-undermining fiction stays in the neighborhood of a certain cerebral jokiness. But the Guatemalan novelist Rodrigo Rey Rosa might have invented a new way for metafiction to feel. Human Matter, published as El material humano in 2009, has many of metafiction’s hallmarks: a narrator indistinguishable from the author, an emphasis on the materiality of the medium (here, through references to the notebooks in which the novel’s words have supposedly been written), a habit of wondering aloud if the events being recounted add up to novelistic art or something else. Such devices are widely reputed to liberate the reader from a sense of the narrated world’s fixity, to welcome her playful collaboration in the construction of the text’s meaning. But in Rey Rosa’s novel these don’t feel like invitations to imaginative play—or like invitations at all. Their more frequent effect in the novel is to stymie our emotional and even cognitive response. An epigraph sets the self-conflicted, purposefully confused tone: “Though it may not seem to be, though it may not want to be, this is a work of fiction.” Human Matter behaves indeed as if it were not quite what it wants to be, and it works to make the reader unclear about how to take it.

Rey Rosa’s theme is Guatemala’s uneasy return to peace in 1996 after thirty six years of civil war between the government and leftist guerrillas. More specifically, his topic is the mess of state documents that the peace made available, and the nightmarish difficulty of making sense of them. The book’s opening lines recount the bizarre process by which the vast trove of material was found: in 2005 the new government investigated an abandoned police academy in Guatemala City known as La Isla, in search of explosives that might pose a public threat. Instead of weapons they found 80 million documents that the National Police, on the verge of being disbanded as part of the truce, had dumped there. The ethical and political stakes of the find could not be higher: the state was responsible for upwards of 200,000 executions and 45,000 disappearances during the war, and the documents hold out the promise of information about those crimes, if not justice for them. The scene is set for a Sebaldian investigation of historical trauma, a meditation whose high seriousness would be commensurate with the material.

This is where Rey Rosa wrong-foots us. “I began to frequent the Archive as a kind of entertainment,” he writes, “and as I usually do when I have nothing to write, nothing really to say, during those days I filled a series of notebooks, sketchbooks, and loose sheets with simple impressions and observations.” The unmotivated nature of the exercise, and the idea of police archives as “entertainment” between writing projects, are the first indications of this narrator’s disconcertingly ambiguous relation to the material. Why are we here? What are we looking for? The answers are long in coming. Shortly after this admission, the narrator reproduces a series of arrest records, chosen because they seem particularly “striking or grotesque.” The list goes on for thirteen punishing pages, and includes political prisoners (“Fajardo Pérez, Antonio. Born in 1937. Student, lives with his mother. Booked in 1956 for sedition and rebellion”), those accused of petty crimes (“Carranza Ávila, Rosa Maria. Born in 1920. Domestic worker. Booked in 1944 for committing adultery in her home”), and others where the record is simply bewildering (“Novales, Dolores. Born in 1919 … Booked in 1955 because she wants to leave prostitution and lead an honest life”).

The effect is designedly peculiar. Are the names real or invented? If the former, the list commands a certain respect—even as its length and numbing repetitiveness makes this resemble a  duty more than a felt encounter with the abuses of state power. But if Rey Rosa has invented the names and “crimes,” the list becomes even more perverse: a tedious catalogue whose only justification would be its reference to real historical suffering becomes, if fictional, no more than a gesture, an imitation of responsibility to the real. Either way, the arrest log interrupts any easy accommodation the reader tries to make with the fictional contract.

This impasse seems deliberate on Rey Rosa’s part, echoing as it does the narrative frustrations with which the novel is fraught: Human Material simply refuses any organizing thematic or ethical thread. For a while, it seems that the material will be loosely organized by the narrator’s early decision to focus his reading in the archive on Benedicto Tun, the (fictional) founder and chief of the “Identification Bureau”  from the 1920s to the 1970s, and, it happens, the supposed author of the arrest records Rey Rosa produces at the outset. Tun is an intriguing character, one whose trajectory fits no particular ideological profile: an indigenous man with no college education, he has survived Guatemala’s ingrained racism to serve both its revolutionary government in the 1940s and 50s and the rightist post-coup regime. At first the reader is tempted to turn Tun into a stock villain—the Eichman-like servant of state power who asks no questions about the justice of what he does. But in practice the narrator comes to half-admire Tun’s personality, which seems to have been one of dogged decency.  Perhaps as a result, Tun never becomes a truly coherent narrative through-line, and we lose sight of him for long stretches. Instead, the narrator’s account of his visits to the archive are interspersed with loose and even petty details, narrated with dry minimalism—a fight with his girlfriend, a chat with his young daughter, a visit to a gallery with an artist friend who is snide to the curator organizing his show (the Mallorcan painter Miquel Barceló, a real-life intimate of Rey Rosa, appears under his own name). The episodes are not elaborated enough to emotionally engage the reader, serving instead simply to buttress the text’s unsettling verisimilitude.

When the narrator is abruptly barred without explanation from continuing his visits to the police archive, it comes as something of a relief both to him and to the reader—as if the novel, in approaching the territory of the political thriller, has finally found a genre that will give it momentum. “My interest in the Archive as novelistic material, which was beginning to fade,” he writes, “has now been reawakened.” (In Rey Rosa’s Spanish, “novelistic material” is “objeto novelable” or “novelizable object,” a phrase even more redolent of opportunism). The plot appears to thicken, as the narrator receives a series of terrifying anonymous phone calls that suggest his investigation is being watched. The calls are as disruptive to his political sensibilities as to his nighttime peace of mind: many of the archive workers are former leftist guerrillas, and the narrator’s progressive sympathies have not predisposed him to fear harm from this end of the political spectrum.

These threats, like so much else in Human Matter, fail to issue in definitive action or a clear narrative arc. Instead, the emotional climax  occurs almost casually, halfway through the novel and in the middle of a chapter, as the narrator reveals abruptly that “my mother was kidnapped in Guatemala City on June 28, 1981, and released on December 23 of that same year.” This is apparently not “novelistic material,” or not only: the story squares with one Rey Rosa has told in interviews and in print, and his earlier writings have repeatedly returned to themes of kidnapping and the complicated protocols surrounding ransom payments. This narrative thread does finally give something like suspense to this novel: we learn that the kidnapping was the work of leftists, and that one of them seems to be employed at the Archive. But more disquieting even than these revelations is Rey Rosa’s refusal to give them the kind of narrative framing they might seem to deserve. There is  no revelatory conversation with his mother, no neat accounting of how the kidnapping affected the various members of the family, no meditation on the ways the narrator’s leftist ideals conflict with his desire for justice. The unavoidable implication is that Guatemala’s recent past is steeped in bloodshed too pervasive to fit the generic templates that organize contemporary fictions of trauma. For all its trickery, Human Matter effectively thrusts the reader into the tedium and terror of the real.

David Kurnick teaches in the English department at Rutgers, the State University of New Jersey. He writes about the nineteenth century novel and contemporary fiction and is the author of Empty Houses: Theatrical Failure and the Novel and translator of Julio Cortázar’s Fantomas versus the Multionational Vampires.