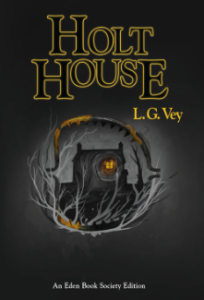 Dead Ink have acquired the rights to the Eden Book Society, a subscription book service formed in 1919 to deliver dosages of horror to its paying readers. The books in question here are from the “1972” series, yet there is more to these books’ production than meets the eye. You might argue however that horror is all about what is beyond our visual perception, but this question takes on a, further, subversive level when we consider it with that which can be also understood in our mind’s eye. Simply, the question of that which haunts us and why it haunts us. Holt House by L.G.Vey is the main book in question, but A Dedicated Friend (Shirley Longford) and Judderman (D.A.Northwood), also from the 1972 series, give us an opportunity to survey the mechanisms of how those elements we cannot see in our environment, and ourselves, “haunt” us.

If it’s a matter of vision, in all senses of the term, we’d do well to remind ourselves of Freud’s quote from his essay “The Uncanny”: “Anxiety about one’s own eyes is quite often a substitute for the fear of castration.” In Vey’s story, the protagonist Ray, for all that his vision – or, array – is lacking, he is primarily concerned with what his stuck in his gaze. Through an aperture in a panel of the fence, he watches a scene of domestic civility, and if we also remember that Freud demonstrated that the word “uncanny” derived from the word for homely (“unheimlich” in German, with “heimlich” meaning “homely”), what do we think of Ray’s viewing as Mr. Latch visits his shed to mow the lawn at the same time every day, whilst his wife Gwen watches on? Rather homely, isn’t it? Ray’s compelled viewing though of the familiar and the unexpected seems to represent what it means to be driven to a place we know, when we’re haunted by something.

Because of this, there is a sense that the presence and gaze of the male is tied in with a crushing sense of fragility that might be referred to as a “castration complex,” an idea that pertains in these stories. We can take this as an idea at least, and although we’re intimately involved and sympathetic to his story, Ray had shades of Norman Bates from Hitchcock’s film, Psycho. Think to when Bates removes the painting (which, in itself is a scene of voyeurism, not least sexual violence) from in front of the eyehole to view Marion (Janet Leigh) undressing before the famous shower scene. Here, there is an inversion of that relationship. Ray, rather than perversity, instead seems to be seeking some kind of assurance from his viewing. In his diaries, Ray :

She wasn’t meant to have you, Dad said, over baked beans and toast. The three bar heater in the front room was on full. It must have been a harsh winter, but I don’t remember what was happening outside the window. Her body wasn’t strong enough for one, let alone two. She had to be stitched back together, after having me. I felt so guilty about that, even though I didn’t really know what it meant. (Author’s italics and unless otherwise indicated further, are also.)

Later we do learn that Ray’s return to Holt House has been precedented by the disappearance of his wife, but neither the reader, nor Ray, seems to know where she’s disappeared too. When Ray does reflect on the death of his own mother that we’ve seen he discussed with his father, he writes, “I will never understand why some women leave and some women stay,” and there is a semblance we sense, in the pain he felt of his own mother “leaving” him, precipitating his return to Holt House.

After the death of Mr Latch, Ray effectively moves into the house. We might expect the widowed Gwen to become a figure of frailty, but instead she slowly flourishes as a source of stability in Ray’s life. Holt House, in a similar way to Bates Motel, is rendered as a place (you might say “complex”) that is not physically, but psychologically entrapping and when we think of Norman, locked, not just in the gaze of his mother, but his own need to gaze on somebody else, do we not see powerful riff on the idea of “haunted”? Being haunted to satisfy the need of your mother, or quell the crushing insecurity over your status, here’s a display on how the mind brings us back to gaze on that which we’ve been missing in our lives.

What about if we’re already at the place we’re haunted by and feeling like we’re trapped in it? Unlike Ray, Daisy is already consigned to a place we’re not necessarily sure how she got there and so we’re as alienated as she is when we explore the reasons for her horrifying situation. In Shirley Longford’s tale, A Dedicated Friend, Daisy lies in hospital awaiting a kidney transplant. Immediately, she concedes feeling like a “fraud”. Apparently, it is the doctor who “wanted” her here and if we’re talking about being locked in places and states and the mingling of them, Longford’s story makes us question why Daisy is even here in the first place, taking us to that fine line of the feeling we experienced in Holt House but reversed. If there is a fault, and we are haunted by it, Longford proposes, where do we as people situate ourselves in relation to others situating of ourselves to it?

In one of her friend Eliza’s visits, the friend whom we suspect the “dedication” bears some kind of acrimony, Longford delivers an acute, not to mention, humorous and grim metaphor for that feeling: “Here, I brought you something.” She handed over a box of chocolates, soft centres.

“That’s very kind of you,” said Daisy. “You didn’t have to bring me anything.”

“They’re from Ray,” said Eliza. “He told me you liked them.’

“I do,” said Daisy. She opened the box and looked for her favourite one, but the space in which it belonged was empty.’

Not just indicative of Daisy’s relationship with Eliza but also the predicament here, the paradox is laid bare: there is something that these characters seem to know but are keeping covered from themselves and the reader. Does this implicate Daisy’s kidney transplant? We’re not to know, but the beauty in Longford’s story, in a way reminiscent of Charlotte Perkins Gilman’s “The Yellow Wallpaper” is how she renders the story and the idea of being haunted and its containment, and why Daisy is in “hospital”, within the insidious culture of blame apportioned to women and female sexuality in Western society. You cannot help but ask would Daisy, if there weren’t mechanisms in our society fostered in a way eerily similar to not this hospital, but institutions run like the hospitals we know, with men in white coats making the decisions, even be lying here? And if Daisy is suffering at the hands of it, why isn’t anybody else, apart from the other women she sits on the ward with? “No rest for the wicked,” Dr Dingley says, but the ambiguity in these platitudes suggest that they are not just platitudes. Even when Daisy is given a private room, Longford writes, “she ought to be grateful, she told herself, to have been given a room of her own.” A Gilman-esque spurring of Woolf’s famous maxim.

Where Longford seemed concerned with what can be made external, D.A.Northwood’s story Judderman returns us to the outside world where a demonic figure lives “in the creases of the city.” This entity though, known as the Judderman, only appears to want to capture those who want to find him and the selectivity in the Judderman’s haunting, is too much for Gary to bare. He wants to meet this grim entity. His brother, Danny, happens to have been captured. This is London in 1972, however, and it’s a city plagued by vitriol and disorder. But it is not just the filth and grime that Gary is focused on, he is also obsessed with exploring for answers to the way this world is. One thinks of Dickens’ opening to Bleak House and its “implacable November weather” and when Dickens writes “as much mud in the streets, as if the waters had but newly retired from the face of the Earth, and would it not be wonderful to meet a Megalosaurus forty feet long or so,” we ask the question would it not be so awful to meet somebody like the Judderman in the fog of London? Why, though, does it seem Gary wants to find him?

Whatever lies behind the fog the Judderman doesn’t necessarily represent a cute dinosaur, but he does represent an image – or no image at all – of those consigned to history, their stories never heard or listened to in the making of this city and even their possibility to haunt, or impact in some kind of afterlife, is rendered almost null. Here are some of the others, along with his brother, that Gary thinks are in the “fog”:

[The] Huguenots, the Jews, the Romans, the Irish, the Italians, the Indians, the West Indians, the gypsies. My own people too. Spivs and skinheads and mods and teds. Hippies and occultists. I have scribbled books containing the stories of coolies and lascars down on the docks. Native Americans in the Victorian Wild West shows, buried aboriginal cricketers in Hackney, accounts of Maori who somehow made their way to London’s docks from Aotearoa. Chinese limehouse, opium smoke, ripper myths, the self-exiles hiding in Epping Forest.

Knowing their stories potentially leads the way to knowing his. The budding confrontation here though is that if Bleak House (in part) was about the realisation of the legitimacy of an orphan from a disgraced mother, as somebody who “should” belong to a realm higher than what she’s consigned to, Northwood represents the city as the place where, whether or not we realise our place or find the truth of what haunts us, it still might not be legitimising or enable a process that makes it visible. Indeed, “Judderman” sounds like the image on the television that falters and flickers, and it throws to mind somebody who is at once there and then not.

If shame does lie on the eyelids then, like Anne Carson said, there’s a feeling that Gary’s visibility and existence is burdened by the weight of those who aren’t visible, who don’t exist. Instead, what is kept invisible – with force, repression – produces something else that is visible whether it be a ghost, a kidney, or a sense of shame. To return to the anxieties we highlighted at the start, Gary is a man who is seeking something but cannot summon it. The juddering man: it seems sometimes pain is necessary for us to understand where we are and where we belong without being haunted by it.