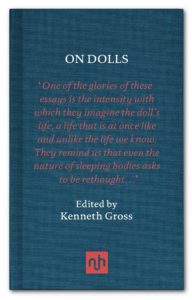 For children, dolls are often the subjects of such intense dreaming that they become his first companions, confidants, and intimates. In On Dolls, Kenneth Gross’ wide-ranging but illuminating anthology of essays, fictions, and poems, the writers animate dolls and playthings with intense and poetic inner lives. Gross presents the essays in a mostly chronological fashion, but he has been carefully selective with his inclusions so that they converse and deepen each other. In his introduction, he suggests that the works all fiercely imagine the doll’s life, and they are essentially “letters from unknown dolls.” In these works, the doll is conjured into tenuous life through the sorcery of words and the vigor of imagination. Whether the dolls are testifying to a child’s first experience of unreciprocated love in Rilke’s meditations or becoming the objects of obsessive desire in Freud’s literary criticism, they straddle between the animate and the inanimate, the awake and sleeping, and the living and the dead. The writers force the dolls into utterance until they become spiritual interlocutors reporting on the mysteries of the human condition.

For Charles Baudelaire, the child’s relationship with his toy can be a transformative experience in the child’s fashioning of an identity.  In “Philosophy of Toys,” he traces the origins of his own fascination with toys and then reflects on the significance of the doll in a child’s life. Baudelaire suggests that the child at play is endeavoring at an early form of artistic creation. He is awed by the child’s ability to dream up fantastic dramas from ordinary and lifeless objects. He writes of the child who sees a group of chairs and fully imagines a speeding stagecoach with a carriage, horses, and passengers or the solitary boy, who transforms the books, marbles, and other paraphernalia in his room into soldiers, missiles, and the arena of war. For Baudelaire, the child possesses miraculously infinite imaginative resources, and play is essential for the focusing of those creative energies.

However, at every turn, Baudelaire persists in reminding the reader of the precariousness of childhood. In his work, there is the sense that any moment, the child might suddenly wake and realize he had been an adult pretending all this time. Childhood is Edenic: it is the time before the inevitable fall into a sedate and colorless adulthood. Maturity is a process of disillusionment, a snuffing out of the child’s capacity for wonder: “The toy is the child’s earliest initiation into art, or rather it is the first concrete example of art; and when maturity intervenes, the most rarefied example will not satisfy his mind with the same enthusiasm, nor the same fervent conviction.” Maturity cages rather than liberates, as if the child were poised on a summit of freedom and life thereafter were only a decline into increasing constraint.

A theme in this collection is the doll as a liminal figure, and Baudelaire situates the child’s experiences with the doll at the threshold between the realms of childhood and adulthood. He writes of children who attempt to “see the soul of their toys,” and start to beat and bludgeon their dolls to see evidence of life. When the children fail to discover signs of a soul, they lose all enthusiasm and abandon the doll for good. At this point, the doll’s “marvelous life comes to a stop.” Just as the doll initiated the child into a more intense form of dreaming, so it also initiates the child to the possibility of loss of life, or death itself. The doll prepares the child for the cruel realities of adulthood—those of unanswerable questions and mortality. For the adult looking back, the doll is consistently a symbol of loss and unrecoverable time, a sort of memento mori. The collection is deeply concerned with the continuities and discontinuities between the realms of childhood and adulthood, and one of those continuities is the way we enliven sculpture or art with our imaginations like the child does with his doll, whether physically animate or not, and the way those objects glimmer and speak out to us with inner lives.

Rainer Maria Rilke, in “On the Wax Dolls of Lotte Pritzel,” laments over the child’s vain and desperate search for the doll’s soul. The intensity with which the child animates his doll has a numinous quality, as if the child were resurrecting the doll with the embers of his own life. Resurrection is even more literal elsewhere in this collection: in “Tailors’ Dummies,” a passage from the modernist fiction writer Bruno Schulz, a father figure, in a trancelike state, gives instructions on transforming matter into living things. For Rilke, the child’s relationship with his doll is a tragic form of unrequited love. He sees the child’s imagination as something like the frail heart keeping the doll responsive and safe from the forces of oblivion and decay. In other words, the child keeps the doll alive until his powers of imagination are exhausted.

One of the pleasures of this collection is the way in which the pieces are effectively in dialogue with each other, and here, Rilke converses with Baudelaire by attempting to answer where one might find the soul of the doll. Rilke comes closer to an answer by suggesting a species of animism. In another essay of the collection, “The Marionette Theatre,” Dennis Silk accords the bar of soap, the piece of string, and the most pedestrian objects with life and asks us to rethink our Western disdain for animistic thinking. In a number of these writings, the desire to animate dolls lends itself to embracing the animation of all things. Rilke writes that in childhood, almost all objects vibrate with individual souls:

You souls of all those lonely games and adventures — naively obliging soul of the ball, soul in the smell of dominoes, the inexhaustible soul of the picture-book, soul of the school-satchel (one was a little mistrustful of this one because it often had open dealings with grown-ups), deaf soul in the bell of the splendid little tin trumpet — how genial you all were and almost tangible.

Regarding the soul of the doll, Rilke is less certain and believes that it could lie either in the child or the doll itself. Metaphorically, one might say that the doll-soul is something created out of the union between doll and child, as if it were the product of their love, however provisional. It is something shared, the sum of spirits poured out by child and doll that might be located midway in the distance between them.

A number of essays in the collection cast the doll in a more menacing light, as a nightmarish object that elicits fear and dread. In Sigmund Freud’s famous work of inventive literary criticism, “The Uncanny,” the doll is one of the devices employed by the fiction writer E. T. A. Hoffman in his story, “The Sand-Man,” to create the sense of uncanny. In the story, the protagonist, Nathaniel, has all his opportunities at love ruined by a shadowy, demonic figure who appears in different guises—as a lawyer, as an apparition known as the “sand-man,” and as an oculist. His second object of affection is a beautiful doll, Olimpia, whose clockwork a neighboring professor has created and whose eyes the demonic oculist has set. Freud attends to a particular scene, in which Nathaniel stumbles upon the oculist and the professor arguing over the doll. The oculist steals away with the eyeless doll, and the professor throws the eyes at the student. Nathaniel is seized by a fit of madness. Freud starts with the critic E. Jentsch’s idea that the uncanny effect is often produced in the reader when he encounters something like the doll Olimpia, over which he is uncertain whether is animate or inanimate. In Freud’s interpretation, the sense of the uncanny occurs in this scene because Olimpia serving as an object of intense affection is a fulfillment of our childhood fantasy of bringing our own dolls to life. Olimpia activates in us a repressed desire. Essentially, the story’s animation of the doll bridges the realms of adulthood and childhood.

Gross aptly concludes his collection with Marina Warner’s essay, “On the Threshold,” which historicizes and investigates the effects of a piece of waxwork called “The Sleeping Beauty,” displayed at Madame Tussaud’s in London. As its name suggests, the sculpture is of a female figure languorously sleeping. It was allegedly modeled straight off a victim of the French Revolution. Warner writes that the portrayal of the doll in its eternal sleep functions as an anti-memento mori by denying the reality of death. Here, the waxwork suggests immortality, an interesting contrast to the dolls of Rilke and Baudelaire, both of which edged the child closer to his first encounters with death. Out of all the dolls in the collection, Warner’s “Sleeping Beauty” is the most liminal figure because its particular features of immortal sleep legislate against its waxen flesh and its other indicators of artificiality. “Sleeping Beauty” straddles the line between the alive and the dead. It is the most undecided over its aliveness, and it is another fine example of the uncanny.

Though Gross’ collection numbers only slightly over a hundred pages and one wishes some of the passages were not as truncated as they have been, it offers a profound sort of interchange from a panoply of voices. After reading these essays, one feels that the mysterious work performed by our own childhood toys on our imaginations has been somehow articulated. The dolls acquire real metaphysical density, as they emerge as our witnesses, our co-conspirators, and our lovers.