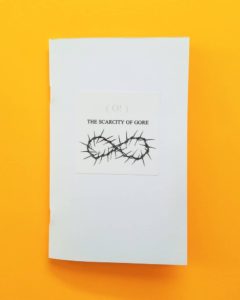 Evan Isoline’s O! The Scarcity of Gore is a text that demands your presence. It is a physical object. A book that must be held in your hands as you read it. Cinema transcribed onto paper. Language projected onto vibrant screens. Written in all caps. Written in the macabre outlines of a garamond-esque typeset, with margins and font size in constant flux. Footnotes trail along the bottom of the page, denoted by alchemical symbols. O! The Scarcity of Gore is a web of surfaces. It is an object with permeating aura, drawing you in.

This is not a book that can be summarized by its contents. There is a voice that permeates throughout the text but there is no plot or setting or characters. The simulacra of the traditional novel is replaced by more immediate priorities. O! The Scarcity of Gore is instead concerned with the encounter that you and it will share — the duration of your reading and viewing. Here, Isoline’s chapbook becomes a tactile object. Its spatial qualities are accentuated. You hold it in your hands as you gaze down at the colorful pages and baroque typeset. Your eyes now interpreting a visual language, set in place as it carries you across the length of its runtime. In this experience, the book becomes a kind of textual cinema, in which certain components — often fundamental to the written medium — are subject to mutation. Each page becomes a set. Typeset and font become a mise-en-scene. 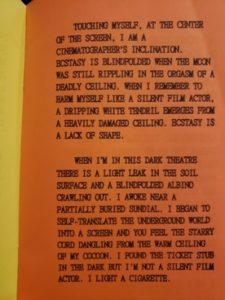 Many books seem to be labeled as cinematic because it is easy to imagine their content being performed. A space opera is cinematic because you can picture the massive machinery of the ships floating through space. But I do not think this is cinematic. It is not like cinema, it is translatable to cinema. Rather, it is script-like. O! The Scarcity of Gore is cinematic because it acts as if it is already a film. Language is repurposed for new solutions. Rather than describing what will one day be on screen, Isoline describes the sensation of viewing. The inherently voyeuristic experience of the reader. Lines do not puzzle together into a larger image — into greater gestures and narratives. Instead we are subjected to sentiments such as, “THE NEON FETUS IS MY EMBLEM” or “SCENARIO WITH A SPERMATOZOID CRASHING THROUGH WINDCHIMES IN MY ORGASM.” In manipulating the expected experience of the reader, Isoline forces us to remain on the surface. There is no fantasy for our escape. We must remain in this tactile realm. We must engage with the purely visual qualities of the book. The page itself.

Preparing for this essay, I read two other works by Evan Isoline: Commodification of Mollusk and XXX. Each encounter felt like exploring a cave without a light source. Lowered by rope into the deafening blackness. Where there is nothing left but what can be touched. The reader’s hand running slowly along porous and damp surfaces. Each text the surface itself. There is a sense that these surfaces are vast and complex, winding in labyrinthine patterns. The language an endless web of codes — orgasm an allusion to a larger process / neon fetus a derivative of some previous experience. And although there is this vast complexity, it never moves beyond the surface. There is nothing underneath that has yet to be unearthed. There is nothing to be mined or extracted. Without fantasy — without plot or characters — there is only the screen. Everything that the text contains remains in your view. Obscured only by its amplified visuality. 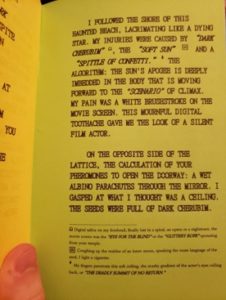 There is a sense that if O! The Scarcity of Gore was to be read out loud, it would be performed by a voice whose source you could not locate. Dictations uttered from the void as you run your hands along the cave surface. In the removal of plot and characters, there is also the removal of setting. Diegetically speaking, there would be nowhere for this voice to stand. Locations are rare and inconsistent. Their mention often undercut by the surrounding sentences. “I CAME TO THIS THEATRE TO BURY MY UMBILICAL CORD WHEN THE MOON WAS STILL RIPPLING AT THE CENTER OF THE SCREEN.” Each location yet to fully-form. Instead each description of place is utilized as any other language might be. As part of the larger image set — their inclusion again visual. The location is not a location, it is a word that might evoke something in the reader / viewer. Another code in the labyrinthine cipher.

The chapbook’s vocabulary is uttered and reuttered. It is introduced into the body, its energy is expended, and then it is recycled for new purposes. Each word becoming a familiar and multi-faceted material of the building process. A unique lexicon begins to accumulate (spermatozoid, rollercoaster, cocoon, orgasm, etc.). Each resurfacing on the page with new uses. Carried out from the mouth of the text. Language becomes a pattern along the surface. It becomes visual. A motif which, when viewed enough times, is skimmed instead of read. Each word an image which you have become familiar with. In a way, this recurrent vocabulary becomes a kind of cast. Various characters interacting with one another. Or actors performing their role across scene and set. Evoking their root qualities in ever-changing contexts.

Following this logic, O! The Scarcity of Gore then becomes a place of sorts. It simultaneously takes up the position of both the set and the theater. It is the set on which this language is performed, but also the theater in which the reader / viewer will inevitably engage with the object.  And in this position of the theater, we begin to understand the duration to which the reader / viewer is subjected. O! The Scarcity of Gore is a temporal object. Because we are always on the surface, always removed from the flow of fantasy — that smooth and passive way in which we engage with verisimilitude — the book reads slowly. The reader cannot predict what will come next because the text does not progress in the ways that they have become familiar with. Instead they are forced to engage with each sentence as they attempt to piece together the larger imagery, themes, and ideologies. In the same way Tarkovsky or Weerasethakul render time slow and dream-like, Isoline accentuates the fatigue of the nonlinear model. To read O! The Scarcity of Gore is to subject yourself to the labors of engaging with text that does not progress, but instead festers in its half-formed landscape — in the linguistic scaffolding that has scattered across the page. 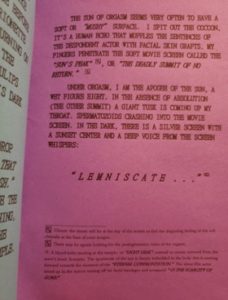 In this half-formed state, the text begins to feel alive. As if it might eventually complete its construction and reward your labor with some kind of boon. O! The Scarcity of Gore mutating from chapbook into scribe-organism. A creature occupying the physical world. Biological processes translated through paper and ink. Each word a cell. Each sentence connective tissue. Blocks of text becoming organ. The mushy umbra, an organism. Tendrils laying the screen of a new textual cinema. Scribe-organism leaving ink and groove in its wake. Language the byproduct of wriggling cilia. The text slowly takes shape in front of you. Writhing / pulsating. Its flesh still exposed as the chitin grows around its abdomen. The scribe-organism locked in a state of becoming-cinema. O! The Scarcity of Gore is a mutated strain of literature. Slowly growing and changing, creating itself in its own image.