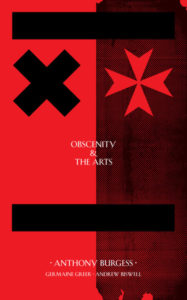 A few months ago I was conducting research at the Henry Miller archive in LA. Finding what I needed for my project quicker than anticipated, I was able to spend the better part of a week poking around materials I simply thought would be fun to look through. I pulled letters exchanged between the author and his erstwhile creative and romantic partner Anaïs Nin, a heavily annotated and crayon-illustrated copy of Leaves of Grass listed in the finding aid as “The Nightmare Notebook,” and, because I wasn’t able to stand not taking the opportunity, documents relating to the U.S. publication and eventual litigation of Tropic of Cancer, the last novel to be tried by the Supreme Court for obscenity.

The quest from official proscription to eventual canonization undertaken by Miller and Cancer undertook in the late 60s is little less than legendary today. The narrative we usually hear tends to follow the more or less predictable arc of American myth: a man, largely alone and against the odds, battles and eventually wins out against the faceless bureaucratic machine for some measure of liberty without which he’d happily welcome death or dishonor. Certainly Miller is remembered as the enthusiastic protagonist of this story — he may have even done some spreading of it himself, self-mythologizing old bullshitter that he was. His notes and letters pertaining to the Supreme Court case at times make him seem not unlike Jimmy Stewart’s character at the climax of Mr. Smith Goes to Washington — further, some of them are filled with extended quotations from Indian independence fighters and even the likes of John Brown, showing in document after document that Miller fully considered the battle for Cancer’s legalization to be a revolutionary act.

Before Mr. Miller went to Washington, however, the documentary evidence attests to a vastly tamer scribbler, who begged Grove Press’s editor-in-chief Barney Rosset to stop pestering him about even trying to publish Cancer in the US in the first place. “The notoriety involved” in that work receiving an American imprint, Miller says, “is something I loathe; a favorable press, from my standpoint, would be almost more difficult to bear than a hostile one.” In a letter addressed to Rosset on July 14th, 1959, Miller, then nearly 70 years old, seems desperate to be left alone more than anything: “What I wish for now is a measure of peace in which to write what is left me to write, or to renounce writing altogether, should I be so inclined. For me the real battle is over.” Quite a far cry from John Brown’s last speech.

The most interesting parts of Miller’s letter are the reasons he offers Rosset for not bothering with the Tropics. He wants his peace, sure, but he also admits to taking pleasure in the fact that his books take pains to obtain — travelers risked prison sentences for smuggling Cancer into the States, and you all but needed to sign your life away in blood to be sold a copy under the table at New York’s infamous Gotham Book Mart. What gave him pause more than anything else, though, was the possibility that the legalization of his works would signify simply another concession by the powers that be to people who want to read dirty novels, rather than a radical exercise in actually challenging those powers and what right they have to govern our lives and minds (not to mention our libraries and bookshops). On this, Miller deserves to be quoted at length.

Part of my reluctance to wage open combat with our American authorities arises from the fact that I see no evidence of genuine revolt in the people themselves. … We are moving steadily in the opposite direction of Whitman’s democratic vision. … The nascent, intermittent liberalism which arises from a senseless ease and prosperity strikes me as a tainted and decadent sort. Whatever concessions are made to the mob are made with an eye to lull and stifle any revolt. We grow more and more Roman every day.

It is not enough, under such an illusory form of freedom and democracy, to win the privilege of reading anything one pleases — usually more trash — but to obtain the right to read books which are distasteful, obnoxious, insidious, and dangerous not only to public taste but to those in power. … To win a legal battle here or there, even if sensationally, means nothing. One does not acquire real liberty through these operatic victories. There has to be an understanding of what freedom means, and of what it entails. Freedom from what and for what, in other words. From boyhood times I have heard and read much of these sporadic victories both in the courts of the land and on the battlefield, yet all I see is a mob which continues to accept the illusion created by its masters that we are living in a state of freedom.

To read books “dangerous not only to public taste but to those in power” is the real key here, and it’s crucial to understanding what “obscene literature” really meant for Miller and why he eventually girded his septuagenarian loins to fight for its legalization in the US. Some day I want to write more about that.

Anthony Burgess offers an argument diametrically opposed to that of his friend Henry Miller on the subject of Obscenity and the Arts. That is, for Burgess, we should be allowed to read whatever we want because works of literature aren’t dangerous, because they don’t pose any threat to what authorities govern our lives and minds. In fact, works of literature don’t do much of anything at all, according to the author of A Clockwork Orange. Cribbing Stephen Dedalus from A Portrait of the Artist as a Young Man, Burgess distinguishes “kinetic” and “static” works, the former corresponding to those that instruct or arouse (“didactic” and “pornographic” works, respectively) and the latter corresponding to literature proper (“aesthetic” works, in his idiom). With didactic and pornographic works “the significance of the book lies in what can be done when the book is closed” whereas “the literary function consists in arousing emotions, even indeed arousing physical desire, but only if the discharge of the emotion is effected during the aesthetic rhythm of the work itself.” Since obscenity, according to Burgess, refers to that which “corrupts” — that which affects one’s morals, induces certain actions, or changes one’s manner of living by its very encounter — “obscene literature” is in a sense a contradiction in terms. The solution to the problem of obscenity and the arts is accordingly that the arts, as such, are not obscene. That’s about it.

For Miller, art must corrupt — he would say, art must “awaken” — and the value of literature is precisely in the danger it poses to one’s way of life, to the authorities both over and in one’s head. What Burgess sacrifices on the altar of his placidly Kantian philosophy of aesthetic experience, on the contrary, is any idea that works of literature can actually pose a threat — to the State with a capital S, and also to one’s own state. For Burgess when you close a good book you remain who you were before you opened it. In fact, this stasis is what guarantees you read a good book in the first place. What a depressing way to look at literature.

Of course, context here is important, and Andrew Biswell’s extensive introduction makes this context clear: Burgess’s rancorous relationship with the authorities and public of Malta, where he lived from 1968 to 1974, began as a result of the Maltese general post office withholding some of the books he had sent from his home in England, and that conflict thereafter escalated thanks to some less than genteel exchanges between Burgess and others in the Sunday Times of Malta. “Obscenity and the Arts” is the transcription of a lecture Burgess offered under the auspices of the Malta Library Association on June 10th 1970 as a sort of public airing of grievances for him and whoever might want to respond. Here reproduced as the central text of Obscenity and the Arts, it may be no surprise that Burgess’s lecture comes across as pat and facile as it does because he wanted more than anything to show the Maltese that he and his books weren’t a danger to anyone thank-you-very-much and can-I-have-my-fucking-books-back-please. Biswell goes so far as to conjecture that “Obscenity and the Arts” “shows every sign of having been improvised in the lecture room,” while Germaine Greer — who responds to the text in a compelling essay included in the volume — calls Burgess’s prolegomena “a lame discussion of obscenity” and his excursus therefrom “an even less penetrating examination of pornography.” Slapdash, lame, and less than penetrating Burgess surely is in Obscenity and the Arts, the titular text of which is the work’s least interesting part. The essays by Biswell and Greer, by contrast, shed valuable light not only on Burgess’s Maltese years, but on the concepts of obscenity and the arts as well as the multifarious and complex ways they can penetrate one another. More to the point, they demonstrate the kind of care and rigor lacking in the text for which they serve as exegeses. Some mildly interesting snapshot reproductions round out the volume, offering the reader a candid if slim window into this tumultuous little chapter in the author’s career. A literary masterpiece according to its own rubric, Obscenity and the Arts doesn’t really “do” much, and I doubt the reader will be affected by it after the book is closed.