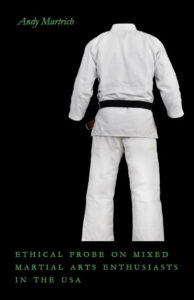 In Ethical Probe on Mixed Martial Arts Enthusiasts in the USA, Andy Martrich surveys the Mixed Martial Arts (MMA) scene in America, sketching profiles of some of its main figures, like Steven Seagal and George Dillman (each one of the book’s brief chapters is dedicated to a specific fighter and his particular brand of crafty showmanship). Martrich, who presents himself in the prologue as an ethicist (and a fetishist), approaches the topic with a single-minded seriousness that is at once humorous and alarming. The mock-conspiratorial argument that propels the book is that the escapist logic behind MMA explains America’s “collective somnambulism” and will eventually lead to the “premature self-destruction of everything human.” What makes MMA such a compelling object of study, from Martrich’s perspective, is its combination of spirituality and physicality, tradition and technology. MMA decontextualizes and remixes elements from foreign cultures, preys on its audience’s willingness to believe in magical phenomena (Dillman, for example, became famous for knocking down his opponents with a “ball of energy”), equates authenticity with physical violence, and deploys digital cinematography to generate a vivid illusion of reality. More than a sport, MMA is a hyperbolic spectacle that echoes and validates its viewers’ faith in old-fashioned notions of truth and realism.

According to Martrich, MMA is at its strongest when it has to defend itself against empirical scrutiny; when its champions are backed into a corner. For example, Ashida Kim, a novelty shop vendor and self-proclaimed master ninja who was multiple times accused of fraud, built his career on over-sensitivity and paranoia, portraying himself as a victim of faithless unbelievers. By the same token, the cult of James Hydrik, an ex-con who claimed to be able to move things with his mind, only became more esoteric after he was exposed before a live television audience, putting the onus of belief on individual viewers. Martrich points out that ultimately, however, the confidence trick and the sceptic’s exposé are equally untrustworthy because both depend on the logic of spectacle, indignation, and feel-good entertainment. Fact-checking, Martrich warns, has the potential to devolve into the same sort of ideological zero-sum game that MMA stands for throughout the book, in which truth and falsity, winners and losers, have been assigned a fixed place from the get-go.

It is easy to see why a study like Martrich’s, in spite of its eccentric and tongue-in-cheek topic of inquiry, could be understood as a welcome meditation on the present moment, marked, as we know, by a tension (never directly mentioned throughout the book) between the counter-factual politics of the right and the left’s crusade for the restoration of reason. Martrich’s decision to focus on a series of anachronistic figures whose culturally insensitive and hypermasculine ethos might be seen as pathetic and grotesque is not accidental. The author makes plain that a strong belief in ideas that are widely seen as ridiculous and retrograde is above all a sign of vulnerability. Perceiving themselves and their world to be under attack, conservatives double down on their beliefs. Their inflamed posture is as much the product of left-wing tactics (the will to speedily obliterate any trace of conservatism) and its relative success than of actual right-wing vigor. It is, Martrich notes, “easy to feel superior and laugh at those who appear foolish,”  but that has visibly done little to vanquish the ghosts of intolerance that still haunt us today.

More important than exposing and condemning these inane icons of yesteryear, the author notes, is asking “why Americans are so eager to join up with simulations and avatars of arcane assembly.” Martrich’s answer (somewhat tautological, since it says nothing about why people are drawn to comforting fictions in the first place) is that this obsession with artificiality is “largely due to a subsistence that is mostly comprised of technological fetishism, celebrity worship, and compulsive entertainment addiction.” Tackling this would entail, according to him, decoupling forms of entertainment like MMA from profit-oriented simulation, returning them to a more “organic” form, like that of Olympic sports, which (at least in theory) reward true athletic prowess.

With his vision of a simpler and more authentic future, Martrich appears to side with those who bemoan our passage into the post-truth era, idealizing the past as a time when reality was grounded in scientific and journalistic truth. This logic has several problems. For one, it is doubtful that fiction can be fought with fact, as Martrich himself admits when he diagnoses Ashida Kim’s counter-factualism as a defence mechanism. Studies show that “rebutting bad science doesn’t work; in fact, it commonly backfires. Describing facts that contradict unscientific belief actually spreads familiarity with the belief and strengthens the conviction of believers.” For another, as a recent article in Jacobin points out, “liberals’ nostalgia for factual politics seems designed to mask their own fraught relationship with the truth.” The article’s central claim is that, broadly speaking, the left has been “willing to ignore inconvenient truths,” attempting, for example, to solve gender and racial discrimination through top-down “diversity management” policies that merely mask the causes of inequality and keep a lid on lingering resentment. It is, in other words, likely that a “return to the real” would require us not only to dispel the alternate universe of conservatism but also to persuade liberals to acknowledge their own excesses and contradictions.

Whatever Martrich’s position on this may be, he explicitly affirms that instead of lecturing and shaming conservatives out of existence, one might do well to understand why they act the way they do and to rediscover the virtues of compassion and patience, and perhaps (I would add) even those of dialogue and compromise. If, taking a cue from Martrich, lucidity is what seems to be lacking in the fractious dormitory of the present, then the aim should maybe be not just to K.O. Seagal and his pals but also to neutralize the soothing charm of similarly alienating phenomena like the new age festivals that have been blooming since Trump – the ultimate escape artist – entered the scene.