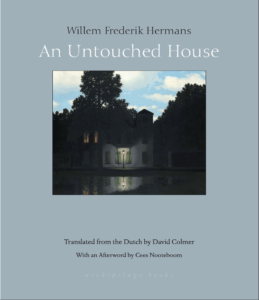 Tr. from Dutch by David Colmer

Willem Frederik Hermans’s diminutive novella An Untouched House (1952) — “Het behouden huis” in Dutch — has been released in a new translation by Archipelago Books. The square book fits easily into a jacket pocket, but the ninety-nine pages of narrative are so explosive as to make one feel like you’re smuggling a weapon — something efficient and brutal, like the hand grenade that the protagonist lobs in the final pages. This sense of a destruction just barely dissembled pervades throughout, as surfaces slip away to reveal monstrous absurdity.

We open in medias res and amidst cacophonous confusion. A “Hollander” soldier is fighting in World War II with partisan allied forces. He doesn’t know whether he is at the front or the back of the offensive, and he thinks back to his fellow soldiers, many of whom — from countries all over Europe — he cannot even understand. Of course, understanding between persons is elusive in Hermans’s world regardless of the language spoken: “Words,” we read, “are nothing but air currents in a hermetically sealed room, never changing anything essential, continuously reestablishing equilibria without ever disrupting them.” The soldier finds his way through an abandoned town — a luxury spa town, he conjectures — to a deserted house. After walking slowly, contemplatively, resentfully, through the opulent home, he bathes, takes clothes from the closet, eats, and falls asleep. He wakes to the sound of a German soldier ringing the doorbell; enemy forces have retaken the town while he slept. To survive without being captured, he pretends to be the owner of the house, playing host to his foes. Later, the actual owner of the house returns, and the soldier kills him. The partisans then retake the town, destroy the home, and kill prisoners in what can only be described as an orgy of violence.

Hermans is a Dutch master of postwar literature, but this was my first experience reading him. Archipelago Books appends a 2005 “Afterword” to this edition written by Hermans’s countryman, Cees Nooteboom, which begins by exploring exactly the quandary faced by a reader like me: how to encounter a writer of massive reputation by way of a new translation which dislocates said writer from the milieu of his writing and from the work-by-work arc of his career? One way, of course, is to go and read everything else by the author, perhaps in order of appearance and with attention to biography; another way is to read succinct retrospectives like the one Nooteboom himself goes on to provide. But since Nooteboom’s contextualizing essay is provided as an afterword rather than an introduction, Archipelago seems to be promoting a third way: simply open, read, and see for yourself.

Those who do simply open and read will find themselves immersed in a nightmare miniature where philosophical musing gives seamless way to beautiful but unyielding cruelty. The protagonist whose words amount to ineffectual atmospheric events — empty “air currents,” recall — tries at times to put a moral stay against the chaos. But in the end the people and things he tries to salvage are swallowed by the “pandemonium,” a word carefully chosen, it seems, for its Miltonic resonance as both a spirit of destruction and a particular place: a city in hell, for Milton; for Hermans, this eponymous “untouched house.” As vicious cycles repeat through initial pages, readers who are, like me, new to Hermans will also think of more familiar authors who have imprinted the nihilism of the war. Kurt Vonnegut and Joseph Heller are the obvious correlates and the names rightly mentioned in most reviews of Untouched. Rightly mentioned because, for instance, of the way the third page of Hermans’s novella links sensory intake with the sort of trauma of consciousness that we associate with these authors. As words for Hermans are split away from actionable meaning, so too is the body’s intelligence dissociated:

But death comes for everyone, even without wars. What difference does war make? – Imagine somebody who doesn’t have a memory, who can’t think of anything beyond what he sees, hears and feels . . . War doesn’t exist for him. He sees the hill, the sky, he feels the dry membranes of his throat shrinking, he hears the boom of . . . he’d need a memory to know what’s causing it. He hears a booming sound, he sees people sprawled out here and there, it’s warm, the sun is shining, three planes are practicing skywriting. Nothing going on. War doesn’t exist.

But if certainly in line with other novelists for whom war is the annihilation of experience, Hermans also brings to mind another and stranger literary kinship. Shirley Jackson wrote the masterwork of haunted house horror, The Haunting of Hill House (1959), just a few years after Hermans’s novella but amidst a domestic anomie that could only settle in after the war’s numberless acts of violence subsided. And yet a tortured, torturing house is central to both: an unassuming structure that causes — or perhaps simply brings out — the worst. Jackson’s novel begins with what some think is among the best opening paragraphs in twentieth century fiction:

No live organism can continue for long to exist sanely under conditions of absolute reality; even larks and katydids are supposed, by some, to dream. Hill House, not sane, stood by itself against its hills, holding darkness within; it had stood for eighty years and might stand for eighty more. Within, walls continued upright, bricks met neatly, floors were firm, and doors were sensibly shut; silence lay steadily against the wood and stone of Hill House, and whatever walked there, walked alone.

The neatness of this house is matched by the matter-of-fact of Hermans’s description: “The house itself wasn’t that big, but all of its parts were.” Straight walls and straight talk. Just a house — and yet.

A version of Jackson’s immaculate paragraph ends her novel, as well, giving the sense that despite the human drama that has unfolded in the intervening pages, nothing has changed. The house remains impassive and yet malevolent, tidy but insane, and living but deadly. It will claim more victims. With Hermans, however, we close with the soldier and his fellows leaving the house destroyed. Windows blown out, corpses visible in the yard, roof collapsing. Casting a final look back, the soldier sees “deep into the house’s diseased and dying maw.” And the final paragraph: “It was like it had been putting on an act the whole time and was only now showing itself as it, in reality, had always been: a hollow, drafty cavern, rancid and rotting at its core.”

Previous translations of Hermans’s novella have opted to title it House of Refuge. The choice of naming in this newer translation by David Colmer seems to better capture the unsettling horror. Where for Jackson the house is an unheimlich agent of evil, Hermans’s final paragraph seems almost like a form of victim blaming, a particularly disturbing connotation considering the rape and murder that has occurred just pages before. The previously untouched house has been destroyed, and yet this destruction was always there, beneath the “act” the house was “putting on.” As airy words have no effect, so the events of the novella do not alter the house so much as insist that it was never untouched at all.

Ben Murphy is a writer and graduate student earning every inch of a PhD in American literature at UNC-Chapel Hill. His dissertation focuses on crowd psychology and mob violence in late nineteenth century literature and culture. Scholarship on other topics is out or forthcoming in Mississippi Quarterly and Configurations. Others essays and reviews are with The Millions, symploke, boundary2 online review, Gulf Coast, The Carolina Quarterly, and ETHOS: A Digital Review. Find him @benjmurph.