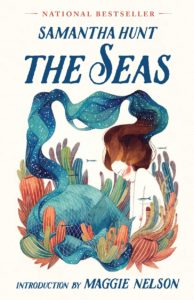 Samantha Hunt wrote The Seas in 2004. It’s always a slight shock whenever this fact comes to mind while reading the book, which feels so 2018 (which is to say, it feels so 2016, the year zero of our current political situation) that it’s hard to imagine that anyone could have anticipated the gradual and severe bleakening of the world that would occur from so far out and with such precision. Yet, The Seas does just that, telling a story of grief, abandonment, and catastrophe overlain with a seasick kind of futurism, one that looks ahead to disaster rather than progress.

The Seas, ostensibly a love story, tells the story of a young girl who believes she is a mermaid. No one else believes this, and it’s up to the reader to decide whether they do. She spends her time working with other women at a hotel (called “The Seas”), working at an all-female sardine packing factory, helping her grandfather compile a dictionary, and obsessing over an older man, Jude. Jude is twice her age, a sailor, a veteran, and resembles, variously, her father and a seahorse. He has at one point attempted to cut gills into his torso so that he will not drown when the ice caps melt. It’s no real spoiler to say that it doesn’t help.

One of the main achievements of the book is to invest this love story—which, from first glance, is an uneasy one—with an even heavier and more intense anxiety. The narrator’s obsession with Jude is odd beyond even its superficial characteristics, and is never phrased in terms of physical desire of a human for another human. When she first sees Jude (falling in love with him before he even introduces himself) she thinks that he is her lost father; before thinking this, she thinks he looks like a seahorse. After this moment of love-at-first-misperception, her phrasings of desire are articulated as anything but human-to-human sex. The two comparisons that led to her love, after all, are not canonically fuck-able. The narrator does or imagines doing a diverse array of things to Jude instead of sex:

This is not to say that no physical sex occurs in this book. The narrator is intimate with a wall, and Jude describes having sex with a landmine.

Feminist thinker and professor Donna Haraway has written extensively about humans and the apocalypse, or of an age of apocalyptic-scale changes, which she sometimes characterizes as the “Chthulucene”, a reference to the Lovecraftian monster whose appearance inevitably heralds a gruesome and apocalyptic end. An attribute of this era is the intimate linking of human and non-human life, which Haraway discusses in her book Staying with the Trouble: Making Kin in the Chthulucene. All species and things face ecological collapse together, in a “multispecies muddle”. This sense of an ending blurs the barriers delineating humanity from all else. This definition creates a sense of possibility as well as one of acute terror. While the scope of emotional intimacy for a human individual is radically broadened, this occurs in the same way that it would between heretofore silent passengers in the cabin of a plane that is falling from the sky, a condition slightly precedent to mortal disaster. In this situation, relationships of kinship arise across the boundaries of animacy and species, and are no less intimate for having crossed them, even sexually so.

The Seas constantly blurs and crosses these boundaries. The narrator believes that she is a mermaid, a creature that is both emphatically non-human and opposed to humans in general – she is often reminded that, as a mermaid, she must kill her sailor. Hunt constantly produces other striking instances of this breaking-down of boundaries. The narrator either imagines or enacts her love for Jude by drinking him off the floor. Jude asks the narrator if she’d like to see a baby, then takes her to see a newborn sea urchin. A boy calling out “I’m [a] tree” over and over again asks the narrator, hilariously, if she loves ice cream. When she says yes, he asks her why she doesn’t marry it. The question is not rhetorical.

Hunt traces out a conception of this post-ecological love throughout the book. This love is centered, appropriate to the circumstances of the Chthulucene, on loss, longing, and uncertainty with regards to identity. All the men in this book but one are sailors. Sailors leave, wander, and are lost at sea. They are defined by their physical and emotional absence. The women wait, for both the dead and the living. Love for an abyss must necessarily be filled in by the lover. If the lover wishes to consummate this love, other means must be found. This post-ecological love is destructive, and marked by loss. More than love, it is a spoliation of resources. Just as the environment has been destroyed, a sin for which we await (the characters in this book particularly sharply) our collective punishment, relationships are immolated and torn apart, linkages that once seemed simple made muddled.

Absence and longing are the main modes of consummation between opposed entities, mermaid and sailor. A childhood acquaintance of the narrator tattoos a tear on her cheek for every year her boyfriend spends in prison. The narrator is jealous of that pleasure, of inscribing loss and longing onto her face. The narrator’s mother awaits the return of her (probably drowned) husband as casually as if he “had moved to Tallahassee”. She is not interested in replacing him, or moving away. She simply waits, allowing the gnawing pleasure of waiting to replace whatever intimacy could have been.

Love in the Chthulucene, and in the shattered landscapes that this era presents, is forever incomplete and unsatisfied. It occurs in a shifting landscape, through the fissures of which previously buried uncertainties are constantly arising. When Jude, in his recollection of his experience in Iraq, deserts his unit and wanders away, he comes across a structure he initially assumes is a spaceship, but which is actually even stranger: a millennia old ziggurat, which has been bombed and defaced by the invading Americans. A huge and unidentifiable creature washes up on the shore near the town, and the narrator addresses it as “King Neptune.” It responds. The narrator’s grandfather spends his days compiling a new dictionary, but, without access to scholarly resources, ends up creating etymologies that are more emotional than historical, discovering commonalities between “hull” and “hell” and “hollow.” History and myth, ouroboros-like, devour and digest themselves, necessitating new ways of dealing with the world and the things in it. An illusion of control has been broken.

From the town, just as from the conditions of the Chthulucene, there is no possibility of flight. Jude and the narrator attempt twice to leave. Each time they are halted, made aware of the permanence of their situation. In the last chapter, the narrator is urged to leave, but, perhaps understanding the futility of the effort, does not. The town functions as a convenient microcosm of the world in the Chthulucene: consumed by alcoholism, populated by mermaids and sailors, marked by a decline of industry (there is an ironworks, which shudders on with no contracts in the vain hopes of once more becoming a going concern), and brutality that occurs so regularly as to become a topic for casual conversation. This too is appropriate; the weather is far too serious for small talk.

Most gravely, we are also unable to exit this condition. Hunt has the narrator in The Seas resolve this entrapment by walking into the sea, accepting her mermaid nature and embracing both her own demise and a new trans-human existence, striding headlong into the thing (“mean and beautiful”) which will destroy the town and everything in it. The last paragraph of the book draws a parallel between the narrator’s condition and that of Ernest Shackleton’s stranded party on Elephant Island. Dying, contemplating suicide by immersion into the freezing ocean, one of the crew members had stared out onto the choppy South Pacific waters. Just before wading in, he had turned back towards the land, and, while staring out onto the barren landscape, recalled an image of a ship that had burned onto his eyes. He turned around and saw the ship, which he had not noticed in his earlier reverie despite staring straight at it. The crew was rescued. The narrator states that she felt the same way, except that there was no ship. When she turned around towards the land, there was only the image of the sea burned into her vision, and when she turned back, it was only that which came to rescue her.