how do I net thee – Shira Dentz 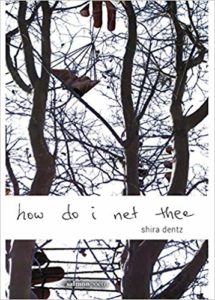 Shira Dentz’s how do I net thee reveals language as a grid. Its verdant poems effortlessly sprawl out across the page as they yearn to capture and document loss, memory, and grief in the face of uncertainty. They are textual nettings that attempt to hold on to fleeting moments all the while knowing that what’s gone is irrevocably lost forever. She writes, “autumn now unlocking rays . . . a man unpacks a food truck / says I don’t want to die here / in the boundless sun.”

On the first page, Dentz offers what functions as a series of working definitions for “grid” in the context of her collection. She writes of “meshes of / a suitable size, used for catching fish, birds, or other livings things / for various purposes as covering, protecting, confining, / holding, delimiting . . . a mapping from an ordered set into a topological space . . . of producing network; to / interlace, / to take, catch, capture, / or gather.” In line with Derridean thought on the dual function of written language as that which both aids and erases memory, Dentz’s grids serve as a pharmakon, both cure and poison; they protect and confine, sustain and immiserate. These poems attempt to capture memory, while displaying an understanding of the inevitable leaks and erasures that are an inherent part of this practice. In rendering the beauty of the grid’s true ambivalence, her poems are like ciphers intuiting the way in which social, cultural, and topographical grids — like language — connect and unravel us.

For example, this collection presents bittersweet, heart-rending love wherein the family becomes the site of wounds as well as possible healing or redemption. Dentz writes, “[i]f I had a tongue, my father wanted it. / Instead I disrobed from girlhood and / took a boy’s voice” and “what is there to believe in, father? / you erased god.” Here and there, the mother appears like “a brief flick in the air like light from a lighter,” and like this the family comes and goes at once, summoned in the most unlikely of places and disappearing again in an instant. Dentz states, “I needle letters in the sky / Someone’s realistic step come closer breaking the trance of UNION family union / My father’s lollipop green then red then one, two, three.” In her poems, wound is another word for union, and that the ties we come close to breaking are held, in time, even tighter.

Alongside recollections of home and family life, Dentz’s effervescent, cerebral language bubbles to the surface of the page, oscillating between sense and ambiguity. She writes,

in the steam of this fungi is it amnesia I’m tracking?

stunned. the idea that>

lo and behold, flow/flower/flour. like a=====leaf his voice floats to the ground below my

This collection illuminates how, like language, memory is slippery, and how our inability to capture real life is a spectacular failure that gives rise to poetry. In “9:03” she writes, “time leaks / out of sequence / A staircase inside a neck, windy halls, / air––/ . . . / all these kids with their words in my room / like my mother / pregnant after the ironing / is done. / time put away folded. / astray.” In the faraway of such images as a mother ironing clothes, Dentz reminds us that “[r]emembrance is mourning. Over and over the loved one.” It is within the dark gallery of memory that the reader feels at times like they too are “having surgery, / open-heart open-heart o-pen-heart,” and senses the urgency of the pen in the hand of one who writes grief in an attempt to understand it, a poet who opens the flow of consciousness where a stream of words rings (wrings) out. These poems implicitly ask, how can one document grief’s ephemeral beauty? They respond with a flood of assemblages, messages, half-glances, and glimpses into the past, inhabiting lyricism in their marrow and showing “[t]he plethora of images I am putting together to house you” which “[l]ike the details of dinner I leave out uncovered while I do something else.” Dentz writes,

what freedom    to delay, postpone

But when i eat it’s a solid thing, like a right word

all this and about beauty. what do we have eyes for? i can shut them and make love,

make believe. pictures take your voice splice give you prompts, and it’s how you dance

In the end, Dentz demonstrates how desire finds us within darkness and how our yearning to ‘draw letters’ compels us to write the next page even knowing that the words will fade. She creates vivid snapshots into a living history that still feels so present, prescient, and pressing: “I wanted to hear from death; my ears tuned sharp to detect language, that is, time, / in everything.”

Julia Madsen is a multimedia poet and educator. She received an MFA in Literary Arts from Brown University and is currently a PhD candidate in English/Creative Writing at the University of Denver. Her poems, multimedia work, and reviews have appeared or are forthcoming in jubilat, Tarpaulin Sky, Black Warrior Review, Versal, Caketrain, Michigan Quarterly Review, Alice Blue Review, CutBank, La Vague Journal, Flag+Void,Word For/Word, Entropy, Fanzine, Tagvverk, Dream Pop Press, and elsewhere. Her first book, The Boneyard, The Birth Manual, A Burial: Investigations into the Heartland, is forthcoming from Trembling Pillow Press.