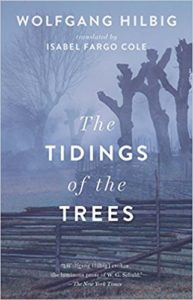 Ruins are either over invested or under invested with significance. Anthony Vilder commented on Le Corbusier’s ville radieuse, a never realized urban master plan, that “the past was either eradicated or transformed, in an eighteenth-century manner, into ruin fragments in the park . . . The city [had] become no more nor less than a cemetery of its own past.” Total eradication of the physical past is linked with cultural amnesia. Ruinenwert as Albert Speer, Hitler’s chief architect, imagined it — the inverse of blanking the slate — concerned the production of moods durable enough to unload on posterity. Buildings are constructed with an eye towards their eventual ruin, designed as massive megastructures which both last for generations and decay in such a way that emphasizes their grandeur. Live fast and leave a beautiful corpse behind, would be the phrase in another context. Both eradicating the past and forcing undead monuments on the future are indicative of a death cult mentality. Horizontal movements along the same ideological plane. Appearing in tandem they suggest a third and as yet unrealized option: the emancipatory potential of trash. The negative transcendence of ruins.

Wolfgang Hilbig is a cleric of luminous accumulation. And his biography is significant as trash accruing in a basement, the bric a brac of life composting to generate their own invisible heat. He is, or was, East German and his novels get their original tuning from that sad, paranoid environment. Hilbig lived through Nazi rule and the subsequent vassalage to the Soviet Union. His father went missing at Stalingrad, where bodies and buildings collapsed into one another and compressed into layers. He worked in a mill, served in the military, and then fabricated tools for a mining operation. Dust, bodies, and digging all have thematic importance in Hilbig’s fiction. In 1985 he obtained a travel visa and moved to West Germany. But as fundamental as it is that his work comes out of a specific historical, cultural, and political context, it’s more important that his work achieves itself by reaching through the metaxy (as Voegelin used the word) and letting a plaintive moan bridge the gap between immanence and transcendence. Hilbig doesn’t write stories which develop into political allegories. He writes political allegories which decay into holy relics.

Georges Bataille wrote in 1929 that “[t]he storytellers have not realized that the Sleeping Beauty would have awoken covered in a thick layer of dust; nor have they envisaged the sinister spider’s webs that would have been torn apart at the first movement of her red tresses. Meanwhile dismal sheets of dust constantly invade earthly habitations and uniformly defile them . . . One day or another, it is true, dust, supposing it persists, will probably begin to gain the upper hand over domestics, invading the immense ruins of abandoned buildings, deserted dockyards; and, at that distant epoch, nothing will remain to ward off the night-terrors, for lack of which we have become such great book-keepers . . . ” What Bataille supposes and Hilbig makes into an art is the mediating role that dust and decay play as enigmatic components of reality.

Ash blows through most of Hilbig’s books. It permeates The Tidings of the Trees, his most recent work to be translated with appropriately arch sobriety by Isabel Fargo Cole. You might say that the book is about a writer named Waller and his obsession with grotesquely enigmatic “garbagemen” who not only survive but seem to be living out an elaborate culture within a giant trash yard. The government and its citizens want to forget their past. They hide away the used material effects of their lives and leave it to be sorted through reverentially by the homo sacer garbagemen. But the plot is only as important as the dust which also fills the pages, which itself is as mute as the languageless garbagemen. Hilbig writes, “I felt happy for a spell when I learned to be silent like [the garbagemen] . . . they had no speech, at least no intelligible speech; they almost always kept their silence, and silence seemed to grow toward them from the ground underfoot. That ground made no noise, just a whisper now and then when the wind carried off the first thin layer of ash . . . just the skin of the top layer, beneath which was a second layer, and more layers followed, and underneath were whole strata of ash, a hundred yards thick, a hundred yards into the depths. Historical ash . . . within this ground was the silence of history, and I was right when I said I had no place on this ground. You can have no place in the history you walk across . . . ” Hilbig transforms allegory — a folktale about a government which denies vital aspects of reality — into something more like a sutra. The ash undulating like a skin, death and life intermingling to animate all material forms. This is a vision of Maya, the spinning meat wheel.

Diderot wrote in ‘Le Salon de 1767’ that the “ . . . ideas ruins evoke in me are grand. Everything comes to nothing, everything perishes, everything passes, only the world remains, only time endures. How old is this world? I walk between two eternities.” Hilbig, being tragically wiser than Diderot, understands that Waller can not, with the cudgel of his ego, keep these two eternities of past and future from piercing the present: “The door and window were on the southeast side, and it was there that I sat at the table, sensing the sophisticated image of transience behind my back, contemplating the decay of all forms . . . ” A field becomes a garbage heap. The cherry trees lining a boulevard disappear. The sound of demolition mixes with the rumblings of an eminent storm. The gap between past and future closes and Hilbig shows us that all things are the trash of time: “Little by little I came to the conclusion . . . that in this day and age only the garbagemen could bring a poetic thought to fruition. Was it because they spent every day in the immediate proximity of an almost mythical experience? It was to them alone that things still spoke of their decay . . . in their presence things had at last achieved a state of utter worthlessness: and with that they could be contemplated in their authentic being. The essence of substance opened up before the garbagemen . . . while all the others, the consumers whose place was back in town, turned away from this essence in horror.”

We want this novel to be about us as we see ourselves. We want it to be about our current North American political situation. We want it to comport with our vision and desire. We want a stand-in for Trump. We want obvious references to the state of Western modernity as we think we experience it. But this novel is too close to us to reveal anything but the deepest ontological underpinnings of matter and being. It urges us to keep digging, holes within holes. It wants us to come to terms with our own dirt, the ash of our own lives. In the most direct terms, this novel is about a recovery of the transcendent sublime through the sacralization of the immanent. We want to see ourselves. We see through ourselves.

There’s a Wizard of Oz in-reverse moment in the book, when Waller crosses some threshold and fully enters the world of the garbagemen and the technicolor distraction of society burns away into a black and white essential . After a mesmerizingly comic interaction with the garbagemen (in which Waller believes he is communicating with them by arranging discarded mannequins in various dramatic poses) Waller seeks shelter in the garbagemen’s shed during an ash storm: “I could breathe again; as fits of coughing racked me, the paroxysms outside reached their climax. It was as though the ground’s entire top layer were being stripped off and flung at my window; at any moment I feared I’d see the entire shack fly away from over me. Everything outside was in motion: torn-up bushes, flurries of paper and cardboard, even whole panels of sheet metal cartwheeled, booming across the plain. Several times I thought I saw human forms running through the storm outside the window, tumbling, rising up again and fleeing onward; they crashed against the wall of the shack but sought no refuge inside . . . later I decided it had been the mannequins, which had been blown over and whirled into disarray.” And once fully entered into the world of ash, the garbagemen’s world, Waller comes to understand his old German society populated by “normal” humans as one that is fundamentally antithetical to his occupation. They didn’t want to understand the world, which requires narrative and time. They wanted surface and calculation. Normalcy. “Normality was normal because it had lost its stories . . . only when the mask of normality was torn off did reasons for stories exist once again.”

“Ruins stand as reminders. Memory is always incomplete, always imperfect, always falling into ruin; but the ruins themselves, like other traces, are treasures: our links to what came before, our guide to situating ourselves in a landscape of time. To erase the ruins is to erase the visible public triggers of memory; a city without ruins and traces of age is like a mind without memories. Such erasure is the foundation of the amnesiac landscape that is the United States,” writes Rebecca Solnit in Storming the Gates of Paradise. We need ruins in America. We need ash. And so we do need Hilbig here. The Korean-German philosopher Byung-Chul Han often describes our society as one that is surface-obsessed, disdainful of resistance or negativity. The “violence of positivity” is one that erodes the erotic, tearing away the veil of eroticism to reveal “bare life.” Thinking becomes calculation. Love becomes sex. Knowledge becomes information. Truth becomes data. Time itself is denuded, time being a resistant medium. A frontier to cross. Hilbig’s ash covers everything in time and re-enchants the world.

The Tidings of the Trees ends propulsively: “The objects describe themselves in the sinking of the ash that covers them, in the flattening of their fury, in the shift from hate to melancholy . . . the day’s glow withdraws beneath the evening clouds. Night falls, and all through the long night I wait for the ghosts of the cherry trees to reappear before me . . . ” And: “It’s the thought that the cherry trees are finally revealing themselves, in their pale feather-light ash, as fleeting as the blossoms of these trees in recollection . . . in the filmy, barely noticed recollection behind the faces of my former companions: snow-white, soul-white, so ghostly was the trees’ blossoming against death. One more time their shadows glowed forth, red before the rising sky, then trickled away into a pale nothingness.” And finally: “Metal struck metal, as though somewhere out there loosely hung metal rails, a great number of them, were moving in the morning breeze and knocking together.” Hilbig’s novel is a hymn celebrating the disheveled vastness of existence: The world exists. We are so small in it. We cannot escape it. Or stand above it. Or be rejected from it.