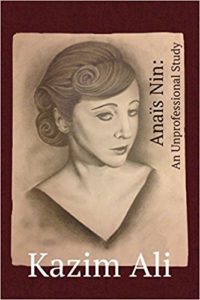 In the introductory word on his method in Anaïs Nin: An Unprofessional Study, Kazim Ali describes his critic-self as a dilettante turned lover, and then a lover turned “amateur critic.” He glides in and out of rooms and conversations as a curious “guest at a party,” populated by the strangely choreographed characters that make up Nin’s literary world. Announcing his approach as neither serious nor scholarly rigorous — “rather than do the proper thing, which might be to engage in a more systematic exploration of [Nin’s] themes and theories” — Ali studiously savors what transformative pleasure a sensuously associative engagement with the erotics of Nin’s texts can catalyze. And why should he apologize for such a critical approach, which also seems to intimately suit Nin’s poetics? He proclaims he will go back to her long and short fiction, and away from common critical considerations of all the ways the biographical and the fictional informed each other and in which order. Nin herself wrote that she was primarily interested in fiction’s power to mold life, and Ali is well aware of this.

Yet, when Ali assumes the role of, as he calls it, an amateur critic, he is far from a lonely traveler on this path of criticism I prefer to term performative. Critical approaches introducing the personal and the narratively unstable, for example in the form of memories (including sense-memories) that dare fill in the space of irretrievable experiences with fiction and valuable imperfections, as a methodology, have many predecessors in the different types of decidedly non-amateur feminist criticism. Other than French literary criticism and its transplants in the U.S. and Canada (the poetics closest to Ali) I am also reminded of the insistent rehabilitation of personal knowledges embodied in black women’s daily life practices in the literary theory of Barbara Christian, and the theory “in the flesh” (Cherríe Moraga) of U.S. Third World Feminism. These writers and thinkers have been by no means untrained, unrigorous, or unmethodical. Hence, Ali’s claim to the name of an amateur critic, even if stated in appropriately uncertain terms, has left me waiting for at least a hint of the historical struggles that redeemed spaces for a feminist critic to be free to eschew the absolutist paradigm of theoretical mastery as disembodied, male-centric, and unrepresentative of a vast part of the experience of being in the world.

Later, it occurred to me that while many a name has been reclaimed in the course of feminist and queer work in language, to the best of my knowledge, no reclamation of the term amateur has occurred. Is it plausible to suggest that the accusations of amateurism have resonated too close to home for feminist critics? I wanted Ali to do this work and briefly historicize the term “amateur” in relation to feminist criticism and literature. Maybe the response would be that such an endeavor is not what he is after, but it would have surely given some fleshly consequence to his long catalogues of erotic encounters, poetic reverberations, and psychic mosaics in Anaïs Nin: An Unprofessional Study.

On the other hand, Ali right away acknowledges Nin and her book on D. H. Lawrence, as well as Hoshang Merchant, Susan Howe, Charles Olson, and Stephen Collins with his call for the “amateur critic,” as models for the kind of study he takes up here. However, as one moves through his text, French feminist theory established in the early 1970s and its concept and practice of écriture féminine, which carried on into the following decades and had its North American advocates, seems indispensable to understand the import of Ali’s method and his aspirations. He may not reference them, but he basks amongst formal insights won by writers such as Nicole Brossard, where the very practice of an embodied writing and the fluid workings of the text are trusted to bring the self to the far ethical point of an intimate empathy with a gendered and sexual other. His attraction to Nin, in fact, lays in her own exploration of this ethical erotics of difference that manifests itself in writing. And if Ali doesn’t find need to mention écriture féminine as a theoretical concept (he denies theories) or a practice of writing, Ali is fond of his two foremothers: he specifically and repeatedly references Carole Maso and Marguerite Duras.

Further down the performative track in Ali’s critical method, Anaïs Nin: An Unprofessional Study engages Nin’s works through a method of co-creation. Duras haunts the text as a model for such interdisciplinary critical-artistic practice. Ali points, for example, to Duras’ use of the formal possibilities of film, stage-directing, and script-writing to pursue and reconstruct characters and themes in continuous fluctuation — a practice that Ali argues is akin to Nin’s own writerly methods. These same artistic forms, with the addition of music, visual art, and dance, Ali proposes, are more suitable channels of approach to the structure of Nin’s fiction, than say, the narrative or the overarching theme. More than merely considering the affective and narrative impact of specific pieces of visual art or music, what is at stake for Ali is how structural and receptive qualities typical of music or sculpture are central to the construction of Nin’s texts. And unsurprisingly, for the most part this is how Ali’s book is organized in sections. Each part — Dance, Music, Film, and Painting — is followed by a sketch for an actual piece in the named medium, and based on Nin’s work. Remaining sections are Houses, Boats, The Voice, and Coda.

Story is not what concerns Ali, and neither does it concern Nin, who doesn’t consider narrative to be capable of a realistic presentation of either fine or tectonic shifts in the human psyche. (One of Nin’s characters, Djuna, protests: “Words words words words and no revelations of the pitfalls, the abysms in which human beings found themselves.”) Criticized for an apparent psychological incoherence and narrative artificiality in her fiction, Nin suggested that examining human creative and erotic potentials takes a series of novels, where similarly or identically named characters are not exactly the same or even a different person, but rather, always a different aspect of a subjectivity. For instance, Ali carefully tracks the memory of Nin’s first encounter with June Miller, which is given to several characters in several respective novels, but each time recounted with certain significant differences. In the sections Dance, Music, and Painting, in particular, Ali maps out with seemingly unmistakable attentiveness every ripple of formal resonance, every musical or kinetic echo, and every visual pattern, whose trajectories he traces across Nin’s fictional opus. He weaves an intricate web of subtle observations, connections, and aleatory comments, which affirm Nin’s approach to writing as a life-long introspective project aiming far beneath the level of annunciation. And Ali does this lovingly and magnificently! Yet, with a pang of uneasy self-recognition, as I was going over many pages meticulously filled with varied configurations of psychic forces that pull subject-aspects together and apart, I couldn’t help but think of Ellen. E. Berry’s comment some years back, on my self-pleasurable MA thesis chapter on the work of Maso: “Prolonged repetition may work in sex, but not always in writing.”

Contrary to Ali’s imaginative (dis)claims, very little in the lover/amateur’s critical method is random and vague, or for that matter, not conceptualized. All the attention to formal detail and the trajectory of their effects is keen, if boundless. Sometimes I wished though that this boundlessness was not accounted for so tirelessly. Ali methodically follows confusions and blurrings as central techniques of Nin’s poetic vision and outlines them painstakingly across the vast geography of her short and long prose. His critical clues are Nin’s persistent returns to certain decisive moments which bind together her fiction and the multiple, compulsively edited versions of her diaries. In the section Houses, he focuses on recording the disappearing and reemerging windows and doors, shifting and burning walls, in sometimes open and sometimes cloistered rooms, within recurring yet always meaningfully changed houses (buildings from Nin’s life are often blurred with those in her texts). Ali considers this intricate and fluctuating motif of the house and the room as Nin’s vehicle for exploring the limits of human attempts at different forms of intimacy. What truly stands out is the mesmerizing section on all the boats (on the water and on the dry, sailing across dreams or sinking) and their psychic and imaginative potential as dwellings.  (“They are able to continue their imprisoned love only because they keep it on the boat as their sanctuary. They are unable to withstand the pressures of the outside world at all.”)

Anaïs Nin: An Unprofessional Study offers an impressive map of emotional and formal reverberations where boundaries of discrete books and characters dissolve to give room to carefully choreographed exits and entrances, encounters and separations, persistent musical themes and codas, a suspended image floating in and out with all its possible transformations. Ali makes a convincing case that objects, dwellings, and doors in Nin’s fiction function much like in a modern stage performance or an art installation: they are flexible, movable but conveniently concretized signs of emotional and social processes and fluctuating intimacies. The difficulty for Ali’s reader is, however, that the thrill of wandering the psychically dense terrain of Nin’s opus is not always easily re-experienced in an account or a description of it, even if this is done with the brilliant attention of a poet. Cataloging each textual ebb and tide is still repeating the pleasure’s name. However, Ali fulfills the promise of performative embodied criticism best in co-creative sections with notes for art installations, a choreography, a symphony, or a film; that is, when he himself manages to reimagine the textual self and the world, as Nin’s deep preoccupation with the memory of the body allows us to do. I wish these parts took up more of the book and look forward to seeing more critical projects of this kind.