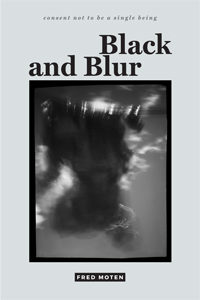 “Feel we?” As in, you feel we? The book in question has many words but I am stuck on these two by sheer magnetic awkwardness. How the register abruptly shifts, the essay suddenly looking up to stare at the reader. How the pronoun cartwheels even as the interrogative tries to stay still. we me we me we. They appear at the bottom of a page, fleeting and inconsequential, in the penultimate essay of Black and Blur, the first installment in Fred Moten’s monumental trilogy collectively entitled consent not to be a single being. Fifteen years of essays gleaned from academic journals, exhibition catalogs, critical anthologies and miscellanea, the sentences here range wildly but also obsessively circle–musicology, Marx, the middle passage–getting at (but decidedly not to) a breathtaking glimpse of blackness. That’s one way to spin it, but the entrances are many.

In spite of whatever handle you’ve come to grab it by, the book will continue to elude, will keep escaping. You can try to apprehend each chapter, essay by essay, follow each twist and turn with linear and “deadening rigor.” You can try to aggregate a total argument or worldview. But I am not convinced it will work out. The pieces are discreet, written for different publications, mostly seeded by a concrete moment of cultural production: a film, a piece of music, a performance, an artist’s retrospective. The essays encounter things in the world and do the work of criticism. But the book accumulates and undermines the distinction between essays. Refrains emerge everywhere the way Moten incessantly visits and revisits the friends he thinks with: Nathaniel Mackey, Adorno, Butler, Delany, Deleuze, Cedric Robinson, Mingus, Rakim, et al. The structure of the collection builds out this sense, pulling together temporary gatherings and contingent affinities between chapters and the whole. Essays begin to cluster because the titles play off one another: “Nothing, Everything,” “Nowhere, Everywhere,” “Nobody, Everybody.” Some consist of sequentially numbered sections that keep incrementing clear through to the next essay and the next.

It’s weirdly helpful. If the book is about anything, it is about spiraling through the cultural implications of keeping the “we” in “me.” By what circumstances of terror and privilege does the subject get to individuate, let alone claim rights, say, over the art object? By what activities of resistance and desertion does the subject never submit to claim that subjectivity, at least not according to empire’s ontology? In exploring these lines of inquiry, the author, performer, essay probes the blurriness between one and many, the “collective head,” jumping wave/particle-style between the individual, the multitude and the lump aggregate. The terrain the reader gets to cover meanwhile is more or less breathtaking. Harriet Jacobs alone in her crawlspace placed within the history of slave writing and editing leads us to trouble notions of the individual actor. Or multitudes showing through in an argument tracing Calypso as a genre, attracting and repelling its way through various flavors of diaspora. Or breaking down a sense of an aggregate “we” through recent gallery shows, working back and forth between David Hammond’s installation in an entirely dark gallery and Chris Ofili’s overwrought canvases.

And yet past a collection of cultural criticism, past an ecstatic post-colonial metaphysics of counting–it keeps flowing away. It is first a book of essays, that is, record of a human thinking. In which case, what is the appropriate mode of “getting” at it? How to “feel we”?

As a writer, as an occasional reader of theory, as a music-listener, how do I get my arms around this book? For a minute, I thought of my review as a mixtape (https://goo.gl/QuWuyy). The playlist begins as the book does with Patrice Lumumba. Thinking of Tshibumba’s heroic folk painting I got stuck on the sound of Hollywood rendering Lumumba’s independence speech, the text of which Lumumba was later forced to eat upon capture. Mostly I tried to gesture towards the cloud of musical references that encompasses the book, some clearly specified, some improvised, ending in Nathaniel Mackey’s “Song of the Andoumboulou 79” from Nod House. This poem is nowhere mentioned but seems ghostly and around as Mackey seems to be throughout: “Huff / pointed into the blur, claimed he’d / come from it.”

The exercise got me thinking about what constitutes the sound of this collection. Is it the pieces explicitly referenced? The specific performances and performers, the artifacts of their recording and digitization? Or the snatches of choruses, bridges and breaks that appear as uncited lyrics or names of artists tossed in offhand? Maybe something else, the sounds the reader returns to, tuning into Moten’s language and project but at the same time, given its sheer critical density and range of reference, as often tuning out.

Not all the essays are alike. At best, they are insanely imaginative, challenging in a generative way and often deeply moving. The collection elicited involuntary gasps out of at least one reader. At worst, the essays are cryptic, tedious rather than enlivening in their convolutions. Given Moten’s rising stardom, illustrated if not by his near ubiquity in contemporary art then surely by his miraculous ability to academic department hop, it is hard to avoid moments of skepticism. Was there ever a danger of an editor raising an eyebrow or letting slip that maybe just maybe something not be included? I found the order of the work in particular to be an obstacle. Presumably they are arranged in loose chronology, though this is never made clear nor were all the pieces previously published. As a result, readers who don’t happen to be graduate students might never make it past the first few essays, never get to reconsider those essays in light of the genre-bending, formal riskiness that creeps into the book’s latter half.

Which is to say, it is unclear to me what kind of a book this is. Is it a greatest hits for those already attuned to Moten’s sound? Is it a preemptive compendium for acolytes now and in the future who will need a complete record of his work? Is it an experiment in academic publishing trying for something else, a vehicle for a restless thinker resisting discipline and disciplinary remove, while equally resisting slipping into autobiography or at least semi-public intellectualism? I’m only suggesting that the absence of guidance on this point seems a lost opportunity. A compendium is certainly called for, but if this is not it, I would not be alone in preferring a slimmer, more curated volume (not to mention the looming specter of the other two in the trilogy).

For lack of a more precise word, the project is startlingly personal. It is, in the best ways, a very complicated and inappropriate invitation to think and feel with. It is an activity of sharing. There are the tiny, improper pleasures. How Moten eviscerates the scholar Paul Gilroy in a wildly excessive footnote. (Could I ever?) Discovering the “blur” in black and blur to be not only a theoretical figure, but also a blurriness on account of Moten’s inability to keep his glasses clean. (Me too!) There is a feverish erudition that avoids merely performing mastery, actually bringing more voices to the party. Certain works and artists he calls up in service of some argument or other in a recognizable way, but with others he makes totally different moves, artists he evokes as if dialing up their sounds, their personal associations, to share a little ground, to lay bare something of where he’s coming from. (I know that track!) The intellectual fireworks do flare and the work is multi-dimensionally daunting, but there is pain here and vulnerability and an inordinate number of references to Moten dancing. When I arrived at the final essay, a brief meditation on Bob Lee written shortly before his death last year, under the arc of the rest of this collection, I felt a touch of awe at Mr. Lee’s lifetime of organizing as lit by Moten’s lavish mode of love and care:

Bobby Lee is another name we give to the xenogenerosity of entanglement: the jam, that stone gas, a block club in a block experiment, an underpolitical block party, a maternal ecology of undercommon stock in poverty, in service, genius in black and blur.

Some readers will come here because of The Feel Trio, because of The Undercommons. Some because Moten is the activists’ theorist, the contemporary art institution’s darling, because of performance studies, jazz studies, literature. Some readers will come here to encounter a brain that is at once more erudite, generous, capacious, fierce, jokey and infuriating than most others on the planet right now. Everybody ought to arrive here to be schooled and troubled, elated and confused, invited and indicted by a sparklingly original vision for black study.