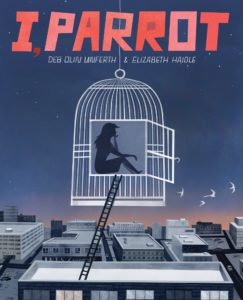 In Amy Hempel’s interview with Paul Winner for The Paris Review’s Art of Fiction No. 176, Hempel pays homage to the stand-up comics of ‘60s and ‘70s era southern California, particularly the sets of Steve Martin. Her admiration lies not just in the successful deployment of that satisfying beat of comedic timing, but, more importantly, Martin’s use of language. She mentions a significant lesson for the modern storyteller: To use the language “in your mouth.” Nothing fancy, light on flourishes — sentences that are tight and true, observations rendered in a discourse that recognizes our common, laymen’s plight: We are all much more similar in our lives (in our suffering) than we go about believing.

Deb Olin Unferth is a writer of Hempel’s lineage, one who relies on this artistic belief that the smallest, most basic instances we find ourselves the protagonists of can be magnified into a complete and compelling story. There is often something comedic in such an approach, the Seinfeldian conundrums we feel ourselves squirming out of, only to have our lack of tact or foresight blow up in front of a now observant and critical audience that wasn’t there when the whole damn thing began in the first place. Her previous works, Minor Robberies, Vacation, Revolution, and the most recent collection Wait Till You See Me Dance focus on the human as subject of at first harmless, and then web-like, self-imposed miseries. I, Parrot is Unferth’s first graphic novel, a collaboration completed with the illustrations of graphic artist Elizabeth Haidle. While the medium of Unferth’s work has transmogrified into this alternate form, her message remains the same: How the fuck did I get here, and now how do I get out?

It all starts innocently enough: Daphne is a divorced mom trying to hold down a job for the requisite amount of time it takes to convince a judge that she is indeed a reliable, professional, and nurturing caregiver for her young son, Noah, now mostly in the custody of his previously alcoholic (now well-to-do) father. Daphne doesn’t seem like an overt fuck-up — she appears pretty, almost-but-not-quite painfully, normal. Yes, she works a strange, albeit quirky kind of day job (“I was hired on as the assistant to a lady who made positive-thought recordings, messages for people to listen to and embrace while running relentless errands over a churning earth.”); but no, she’s not criminally selfish, insane, or fighting off some unfortunate addiction to make it through the day. She’s just a lady trying to get her son back from the unequal joint custody terms settled upon by a judge in divorce court (every other weekend, half the holidays, and three weeks in summer), and fighting against a slew of piling and unpaid bills (rent, court fees, and lawyers). Daphne is filled with the desperation we too have felt, the one that convinces us (not totally naively) that if we just had the money, our problems would, if not disappear, then at least be ameliorated, and our fellow, professional citizens of this great land would finally start to take us seriously.

When her boss Mindy Mane (who she privately refers to as “the Moon” in an unexplained, though pleasurable joke that becomes the reader’s as well) asks Daphne to housesit and watch over her forty-two exotic parrots while she goes on a lecture tour for her positive-thought messages, and offers to pay her double her monthly salary for two weeks’ work, Daphne says what we too would say: “Ms. Mane, lead me to your birds.”

This is how the hijinks begin. These birds — they are irreplaceable. Not only are they an over one hundred-thousand-dollar collection of near extinct species, but they are an inheritance to the Moon, passed down after the death of an uncle; there is a more than logical attachment to these birds, one that resides in not monetary, but sentimental value. Riding on the success of this particular housesitting isn’t simply the opportunity for Daphne to get in good with her boss, but for her to prove to the world that she can take care of something (or forty-two things). Her ability here reflects her proficiency as a mother, the ultimate figurehead of nurturance and support. Just as we realize these are the stakes Daphne has set for herself, we meet Laker, her boyfriend, sent initially as a foil to her shaky self-assurance that everything is under control (“This would be easy to fuck up,” he confirms in an early scene, showing up uninvited to the Moon’s house), but who develops into a meaningful character along the way. Laker, we learn, has been there to help raise Noah during the hard years, and while he too can’t hold down even the lamest, simplest, or mindless of jobs, he is a healthy, though dopey father figure to Noah, and a good man to Daphne.

Of course Daphne loses the birds, but I won’t tell you how. And even though most of the plot-points seem as formulaic as a sitcom episode using some version of this storyline, Unferth makes all of this her own, taking on situational comedy and the graphic novel at once. I felt simultaneously the comfort and novelty of Unferth working through deeply familiar tropes and characters infused with her own sense of how this story sees a new day. And perhaps that’s the beauty of it: I know Daphne, I know Laker, and I know what it’s like to have some no-brainer duty (Just feed the birds! Don’t lose them!) stacked up against me like a precariously standing Jenga tower where it’s my move and everyone is waiting — myself included — for that fateful piece to send the whole thing crashing down. Thus, the self-absorbed plight of human existence, the nagging self-doubt of a hilariously narcissistic race that compulsively rewrites a narrative of idiocies imposed by ourselves, a people brimming with as much hope as skepticism just below the surface. Universal statements are not fair, yet it still feels fair to say that most of us live by this hope, the hope that we are doing the right (or wrong) thing to make the future a better place. Unferth is a writer who relentlessly taps into this hopeful energy in the face of each characters’ odds.

In Scott McCloud’s Understanding Comics, he discusses the strange trance humans come under when observing the simplified images of the cartoon. “Thus,” he writes, “when you look at a photo or realistic drawing of a face — you see it as the face of another. But when you enter into the world of the cartoon — you see yourself.” Katherine Haidle’s rendering of Daphne, Laker, and Noah leans heavily on this concept. They are stylized in such a way as to represent “Everyman,” or “Everywoman.” Backgrounds are spare, images are simplified, momentous scenes are reduced to bare-bones minimalism in terms of style and white space. In other words, Haidle leaves plenty of room for the reader to infuse herself into the lines of the story: Unferth’s simple language and Haidle’s basic outlines. There is a storybook quality to her pictures. In the scene meant to show Daphne’s greatest motivation (that she desperately misses the duty of being Noah’s primary caregiver), the frame contains a completely shaded-in outline of Daphne’s body with a white cartoon heart taken out, left there starkly in the middle of her blackened chest as she stands in the doorway of an unlit room. Through this simplistic etching of our deepest feelings of grief, loss, and failure, Haidle embraces the power of suggestion McCloud describes. Unferth was already inviting her readers to see themselves in her characters long before this graphic take, but Haidle’s artistic hand creates a new door for fans of dramatic realism to walk through. It makes for effortlessly pleasurable storytelling, one that fuses the realms of our childhoods with the great weight of our unwieldy adult lives.

Gravity aside, the story is funny in a non-gaggy way. One of my favorite early scenes occurs when Daphne meets the housepainters, several men commissioned by the Moon to paint while she is away on tour. They are loud, presumably of Latin American descent, and come at all hours of the day, even on Sundays. When Daphne attempts to maturely address these problems with the painter she has formally met, Lee Anthony, she learns they are all “Lee Anthony.”

“May I talk to Lee Anthony?”

“I thought he was Lee Anthony.”

[Turns to a different painter.] “So who are you?”

[Full frame of this new Lee Anthony standing up to face Daphne, no words.]

In such moments, Haidle and Unferth work seamlessly as a team to deploy this kind of second by second delivery, the understated comedy and its timing heightened, light absurdity ruling the page.

By the end of the novel, we are left to ponder over the modern-day fable that Unferth has reconstructed, the maternal figure coming undone and then rebuilding a safe world for Noah to grow up in. Daphne’s life is riddled with small problems and relentless inconveniences, larger catastrophe’s reserved for natural disaster victims, plagues, and other life threatening predicaments. But these piecemeal issues have punched holes in the tower of her life. Her pain is our pleasure, and fun to read. Though, in true cathartic form, her pain is our pain, too. This is why I love Deb Olin Unferth. I find myself in the white space of all her stories, and now in the middle of Haidle’s unshaded cartoon heart.