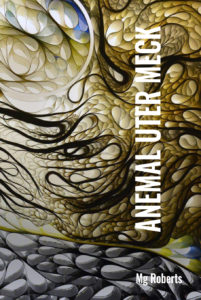 In 2015, one hundred readers cycled through the E.M. Wolfmann General Interest Bookstore’s fifteen day reading marathon called The Hundy. This is where I first heard Mg Roberts’s work: in a one-room bookshop in Oakland with people lining the walls and the stairs and sitting cheek-to-cheek on the rough wood floor. A painted bedsheet acted as a backdrop to the mike stand. Mg read, among other things, a short, three-page poem called “Mercury Retrograde: the physical experience of a seriously half-ass apology.” The poem braids together a series of narrative strands: a present-tense thread where the speaker is pregnant, a past-tense experience in one of CAConrad’s workshops, and a flurry of moments where the white gaze filters and distorts Asian-American identity. The speaker undergoes a magical transformation. Two thirds of the way through the poem, after woven snippets of white high schoolers’ racial & sexual slurs, after an ex-husband’s dismissive reaction to the Confederate flag hanging in the living room at a grad party in Tennessee, after the baby kicking, and after CAConrad’s careful instructions, she reports, “I grew up and became a unicorn.”

I was working on the Sierra Nevada Review at that time and asked Roberts if we could publish “Mercury Retrograde: the physical experience of a seriously half-ass apology.” We could! We did! That poem is included — in an altered form — in Roberts’s second book, Anemal Uter Meck. The book is made up of three sections, each carrying one of the book’s title words as its section heading. “Mercury Retrograde” has been grafted into the almost-thirty-page third poem, “Meck.” At this year’s Thinking Its Presence conference in Arizona, Roberts noted that people in the diaspora are in a constant state of arrival and re-arrival and that this “is the perfect way to open into language.” The continual and capacious blooming-open of Roberts’s work is evident in this poem’s evolution from a stand-alone braid to a dynamic thread in a much larger tapestry.

Each of the three sections in the book contains a single poem stitched together from paragraphs, shorter phrases scattered across the page, and some spatial arrangements that more closely resemble traditional stanzas. Roberts’s stitched, paratactic composition strategy reminds me of Wendy S. Walters’s “Chicago Radio,” a hybrid text that was first published as a lyric essay by Seneca Review and subsequently became a part of her first poetry collection, Longer I Wait, More You Love Me. Most recently, “Chicago Radio” has been anthologized in Walters’s book of essays and stories, Multiply/Divide. I’m fascinated by that poem which is only a poem in certain contexts, and both of Mg Roberts’s poetry books fit this category. The room between the fragments allows the reader to co-associate. It’s a “construction to constrict and extend, as in the phoneme.” Like a phoneme, each of these fragments fractals into new semantic sequences as the verse builds.

Anemal Uter Meck shimmers between poem and essay reflecting the fact that its subject matter — motherhood, immigration, Filipino diaspora, sex, medical testing, and language — is all wound up in ideas of incompletion and completion, arrival and departure, being seen and being misjudged, and geographical and metaphorical distances. There’s constant movement here, and a tracking of multiple storylines within the (fractured) grooves of memory, which makes this book ripple with connective possibility. Roberts’s work showcases an exemplary marriage of content and form.

In writing about Bhanu Kapil’s work in Nests and Strangers: On Asian American Women Poets — a volume for Kelsey Street Press which Roberts helped edit and for which she wrote the afterward — scholar Dorothy Wang asks “How does one begin writing when the ‘I’ who speaks emanates from a body that is viewed a priori as a not-citizen, a not-person, a not-human? How to write when the ‘I’ cannot contain the psychic fragments shattered by dislocation, emigration, immigration, and assimilation?” The fragmented admixing in Roberts’s work can be seen as a response to this question — not a complete answer, but a deep rumination. A continual return to the question.

In the book’s first poem, “Anemal,” we hear that

Even before the syllable begins, it begins to stink. When I discovered this, it was my turn to drive carpool.

The misplacement or ordering of things occur as affect—as typo.

Everything blurs over time or becomes a smudge, a series of letters lining page or an overpass. This is no accident. Perception is an eye-roll where I mistake myself all the time. Perception is a misunderstanding when the white lesbian at your child’s coop decides to label the books according to:

An accumulation of fragments challenges the borders of things: The “I” in the first fragment shifts to “you” by the third, which pushes the border between the writer and the reader at the same time that the language stretches against the othering couched in white liberalism. Categories of race and disability have been simultaneously isolated and pathologized. These lines demonstrate what it’s like to be filtered through fragments by someone thinking they have the whole picture. Language appears as a typo or something gets said, then retracted: a misplaced (self-righteous) affect. This book shows us that the words we see in the world — whether on a page or tagged along the freeway — mingle and blend inside of us, become part of our experience and, by extension, part of us.

The book foregrounds its seams because this book is also about its own making. The act of making is one way to create change. “How can I make things any clearer here? Can I say the making of important things is like an axis, the study of tectonics?” “Anemal” quotes Bhanu Kapil: “i said, what is a monster? / you said: anybody different.” Later in that first section we hear

between here and there i chew over sky and watch columns of birds lift. off wings belt into horizon. feathers eclipse syntax:

Anemal Uter Meck’s builds a material grammar; language is embedded in the real: “Sentences are like teeth you write, all teeth and hoof. Shall we say it with a comma, a limb, toe arrangements and webbings, through the curve of your round face?”

Language interchanges with the material world and Roberts’s words mingle with other texts. There are quotations throughout the book. Whereas in her first book, intertextuality gets woven into a quotation-architecture, a superstructure that supports the body to the point of becoming a part of that body, in the second book the intertexuality is seamlessly folded in. Quotes appear italicized and often unattributed within the poems. The credit comes in the back, in a section labeled “compost notes,” which includes Lacan, geological texts, the work of several poets as well as conversations with poets in and around the conferences Thinking Its Presence and Crosstalk, Color, Composition.

The effect of all this mingling is a kind of alchemy. That line in “Meck” — “I grew up and became a unicorn” — is a significant turn in that poem, but also a calling card for the whole book. Roberts leaves nothing out, and by giving the reader pieces of everything, she creates the compost in which all of us can grow.