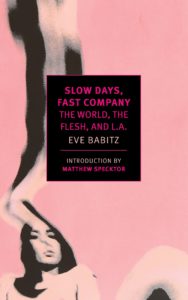 I bought Eve Babitz’s Eve’s Holllywood at Elliott Bay Books because I’m a sucker for most NYRB texts, and also I wanted to be friends with the woman on the cover. This is how I’ve found most Los Angeles-centric books I love, from Francesca Lia Block’s Weetzie Bat books to Mary Robison’s Why Did I Ever (though admittedly that cover is just a big blood-red square!), to Kristine McKenna’s interview collections on Fantagraphics. I’m not being cute. I could write another introduction, about Mike Davis’s City of Quartz and Thom Andersen’s Los Angeles Plays Itself, about the city’s hard pretty shapes, about the dust season and the fire season, but it wouldn’t be as sincere. I seek out books about Los Angeles because I want to sit in sunshine with babes and talk about stories.

Eve Babitz is one of these heroines, for me. Look her up and you’ll probably find one of two pictures, the first a classic pool pose in a soft black bikini and frail white boa. She knows she’s being photographed but won’t look at the camera. The other is of her naked and twenty-three at the Pasadena Art Museum, playing chess with Marcel Duchamp. He is fully clothed, so I wonder if she was cold. This to me is what makes her naked, not nude — he makes her naked. I would guess she knew that though. It’s a performance. And really, it doesn’t matter.

Eve Babitz was born in Hollywood 1943, making her immortal. Her parents were Russian Jewish and Cajun French, her dad was a violinist on contract with 20th Century Fox, and Igor Stravinsky was her godfather. Most biographies are a list of men she dated — Jim Morrison, Ed and Paul Ruscha, Walter Hopps, Steve Martin, Harrison Ford — and end by comparing her to Edie Sedgwick, because: art, sex, woman. I love this gossip, and I love Eve’s other works too, which could be broadly categorized as collage or quartz. (Here too I think of how CAConrad talks about Dr. Sylvia Earle, says that the most common form of communication on earth is luminosity.) Eve makes labyrinths and constellations. She is luminous in that museum photo too. “I did not become famous,” she writes,

but I got near enough to smell the stench of success. It smelt like burnt cloth and rancid gardenias, and I realized that the truly awful thing about success is that it’s held up all those years as the thing that would make everything all right.

(Here I argue that actually sometimes it does, when you’ve never had money and then suddenly you do, some things get better immediately — but I suppose success isn’t always money.) Eve designed album covers for Atlantic Records including Linda Ronstadt and Buffalo Springfield; wrote articles and short stories for places like Rolling Stone and Vogue; and published seven books. Her “newest” is the reissue of Slow Days, Fast Company, with a pink taffy-pull cover designed by Katy Homans (with Larry Bell), and an introduction by writer and editor Matthew Specktor. He too talks about Eve’s luminous communication, which for him is beyond time: the eternal sunlit momentous space.

Eve starts like a god, in control. “This is a love story,” she says, “and I apologize,

it was inadvertent. But I want it clearly understood from the start that I don’t expect it to turn out well . . . Besides its being bad luck [sic] to even whisper that you’re happy, it’s also not nice basically.

This is powerful. Eileen Myles immediately pins genre on her own work in a similar way, and so do third- and fourth-wave intersectional feminist zines, all narratives I hold in the highest regard. Of course, and just like Los Angeles, Slow Days, Fast Company is more than one thing. (I would never say “more than just a love story.”) It is also a map of Los Angeles, arranged in neighborhoods, monuments, and weather (Bakersfield, Dodger Stadium, Rain), and, like much of Eve’s work, an intimacy. Reading it is like sitting next to her at a dark bar or windy place, meaning the story is the thing and it’s probably mostly true but if it’s not, who cares. Because really, writing about, writing in Los Angeles any other way would be fake. “Los Angeles isn’t a city.

“It’s a gigantic, sprawling, ongoing studio,” writes Eve. “Everything is off the record.” I admire this heartbeat close approach, which invites a closeness incorporating but also expanding the male gaze, which is an inevitable albatross for a white cis woman telling stories in Los Angeles at this time. We are asked to enter these worlds, to see Los Angeles as Eve does, to consider happiness a right not a luxury. There is music and warmth and jokes and booze and frequently, hot flashes of color and food, like tiny paintings: “golden bracelets caught the light of the mustard hills.” “A faded rose-suede suit.” “A white powder called Coyote’s Brain.” Above all, Eve is fascinated with women, she likes “to find things out from them.”

And because we already know this is a love story with no expected ending, the reader is allowed to tumble into these worlds. Basically, we follow her — sometimes into a short story, sometimes a vignette or five. As a result Slow Days, Fast Company tumbles sometimes too, but almost always delightfully. I mean this word. Wonder is important. Sometimes I wanted to argue with her — her being Eve, being Eve-as-protagonist — but I never felt lost or bored. She wants and she is frustrated, which are sexy moves in a pseudo-autobiographical narrative, because you can’t always get what you want so writing it down anyway is brave, and comic. “I wanted,” writes Eve,

to write a story about Palm Springs that was going to be sexy. I wanted a story with peace in it, for god’s sake. Now I was stuck with this broken romance: Shawn kissing my foot instead of my mouth.

The text has no white noise, and there is always engagement, on several levels. For example, the book is studded with “Easter Egg italics” addressed to Eve’s lover, but really only because she knows he wouldn’t read it if it wasn’t about him somehow. I am charmed by this tenderness. Another writer might have decided to write a book immediately about Sam, or not to write at all (to make him meatloaf instead), to complain about Sam not caring, but Eve just ornaments him in as best she can. For the reader, these are both hilarious and traumatic moves — especially in later sections, when Sam is not the only lover — and in all cases it makes Eve real and trustworthy, as both novelist and subject. I do not have a brick-and-mortar world word for this kind of romance: this kind of pseudo-epistolary polyamory, but it is one that feels true and wonderful to read. There is a clear beloved here, but also an independence, and so multiple stories and no clear end point. It’s a form I see echoing through Dodie Bellamy’s essays, and the way Juliana Spahr uses pronouns and talks about marches.

I need to say too that for all this gossipy beauty, for all these beautiful luminously communicative moments, there are also a full two pages about tar babies. There is a lot of othering, and very occasional, very casual racism. While Eve isn’t without working class experience (“The act of waitressing is a solace, it’s got everything you could ask for — confusion, panic, humility, and food”), and while she is a solid second-wave feminist, she doesn’t push her intersectionality very far. I suppose this is the times, the pace of a nightlife focused around multiple loves and mysteries, and capitalist exchanges, and sexual attraction — these are simply facts — but it made me feel a little gross. Then I was swept along to the next page. I love Eve’s response to men who ask her how she writes. “On a typewriter in the mornings,” she says, “when there’s nothing else to do.”

Mairead Case is a working writer in Colorado. She is a Creative Writing/PhD candidate at the University of Denver, the Summer Writing Program Coordinator at the Jack Kerouac School of Disembodied Poetics, the organizer of the Dikeou Literary Series, and a writing teacher at DU, Naropa University, and the Denver Women’s Correctional Facility. Mairead is the author of the novel See You In the Morning (featherproof books) and Tenderness, a poetry chapbook (Meekling Press). maireadcase.tumblr.com