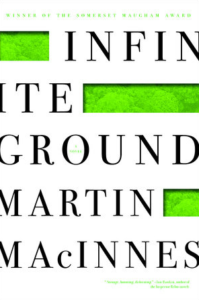 It is difficult to classify Infinite Ground, the debut novel by Scottish author Martin MacInnes. The book feels, at first, like equal parts hard-boiled detective story and trendy eco-thriller. There is a missing person, Carlos, a young office worker who inexplicably disappears without a trace. There is a grieving mother; there is a semi-retired inspector; there is a young assistant. This cast plays out against the landscape of a humid and populous Latin American city, situated near an encroaching rainforest and interspersed with vast and ominous corporations.

But the way MacInnes plays with these cookie-cutter parts is unlike anything else we’ve seen, from the aforementioned or any other genres. First of all, many characters, locations and companies remain nameless and lack any identifying characteristics. There are extended epigraphs preceding each chapter, taken from a book that doesn’t seem to exist. Then a number of corporate conspiratorial elements start to reveal themselves: crisis actors, contingency sites, civil actions. Suddenly everything seems rather duplicitous, and as the reader learns more and more about the inspector’s personal life, we wonder whether he is actually fit to be in the field or not.

These initial attempts at an explanation for the missing person are soon whisked away in favor of more scientific — or more sinister — offerings. The inspector spends passages describing the ways in which “each inhabited room has its own ecology,” claiming he can sense which rooms contain the most conversations: “It was intuitive, but he tended to be right. A room would be more hectic after language.” A series of interviews with Carlos’s coworkers reveal his weird habits and discomfiting physical symptoms, including “dieting, manic shaving, hiccuping, hanging upside down, cracking his jaw and contorting his face, arms held wide, as if simulating flight.” These symptoms seem both normal and severe, but what his coworkers agree is strangest is that they went unnoticed while he kept working. Is this absurd, or is it just the typical dystopian nature of late capitalism?

Then, from swabs taken in Carlos’s workspace, a young scientist pulls an unnerving amount of information, rendered in clinical prose. Her analysis of his keyboard reveals that “the uneven spread of foreign objects — pollen, skin cells, microbiota, foodstuffs — confirmed the general content of his language.” She examines microbes and presents a detailed description of the body as an ecosystem, of physical illness in unity with psychological distress—but furthermore, she says, “Definition was his problem. None of him was solidly drawn. His skin came loose, rich and fertile in microbiota. He sloughed off…Are you surprised he disappeared? Think of the image most people carry of themselves, in the front-facing third person. A man and a landscape clearly defined. But he couldn’t think like that any more.”

It is this revelation that begins to undo the inspector in a much more dramatic manner. As the inspector’s paranoia increases, he struggles to comprehend a person melting into their environment, and struggles to come to terms with himself — and his objective — as a porous body. He has an intensely vivid dream of an office worker who dies of a heart attack while at his desk, going on to putrefy and rot there, becoming food for flora and fauna. The inspector’s line of questioning now makes a 180-degree turn: rather than asking why Carlos would disappear, he begins wondering why he wouldn’t. Dreamlike prose presents long, rambling passages about the unreality of the city and the inspector’s apartment, everything feeling inauthentic and dislocated. There is repeated emphasis on the bizarre closeness of sterile, neat corporate processes and the messy, leaking nature of bodies and the natural environment. In an especially unnerving sequence, the inspector sees a crowd of people and goes to check out what the ruckus is, only to pass completely through the writhing mass without finding anything at its center. The writing becomes as porous as the inspector’s mind (and, if one chooses to believe this explanation, as Carlos’s self), and it becomes more and more unclear what is a hallucination and what is reality.

But then: a breakthrough. The inspector (seems to) feels better, sees more clearly, and pursues a line of investigation into the nearby rainforest. Prior to his making landfall, though, there is an interlude of bizarre “case notes” on the forest that establish it circularly as a kind of Bermuda Triangle. Strange events seem to occur here; there are “statistically unlikely repetitions,” and people in “artificially constructed communities” revert to “pre-linguistic modes of living.” Upon arrival, the inspector joins a sort of disaster tourism group, embarking on a hike to see the remains of a plane crash, as well as the frightening and violent indigenous peoples (although these, too, are revealed to be actors). But it is unclear how, exactly, the inspector moves from place to place, whether physically in reality or only revisiting locations mentally: the text lacks spatial awareness, and often only belatedly reveals itself as a dream.

A chance encounter with a film crew provides the inspector with an unclear photograph that he immediately identifies as Carlos. Continuing the pattern of finding apparent revelations in everything, the inspector reads the anonymous body’s limbs as strategically posed, suggesting a message or even a location. He develops this hunch with manic perseverance, even as the reader might suspect an element of confirmation bias. Then there is a section titled “What Happened to Carlos: Suspicions, Rumors, Links.” This is as much a confession to the falseness of the entire investigation (“an indulgent and morbid fantasy created by a man in middle age in grief for his wife”) as it is a laundry list of possible explanations for Carlos’s disappearance, some of which are plausible and some of which are less so (“an elaborate production performed by an experimental theater company”; “a sudden and giant molecular distortion”). From here, the plot rapidly picks up the pace until it completely unravels. By the last page, we are unsure of anything that we have read thus far, but if there’s one thing this book lends itself to, it is speculation.

MacInnes’s first novel is wildly ambitious, and everything it is trying to do might seem to be too much. There are easily lobbed criticisms that its metaphors are too transparent: an exploration of grief, a description of the writing process, an excavation of memory. So many different explanations are offered that the novel itself almost seems to dissolve. It might easily be considered an eerie choose-your-own- adventure story, wherein the author thoughtfully provides you with every possible solution and allows the reader to select which one coheres in the most satisfying way with their experience of reading the book. This is coupled with the unsettling feeling that the explanations that you do not choose continue to go on proliferating.

But this is much more than a book with multiple endings (or even multiple worlds); this is an impressive exploration of porosity. Nothing can be experienced as separate; everything is in constant osmotic transaction. Each solution slips easily into another more interesting one, or degloves like putrefying skin into nothing valid whatsoever. These are porous bodies, all, from the language to the landscape to the human flesh. Body and mind, narrative and investigation, fiction and reality are all interactive with each other, with the objects surrounding and supporting them, and with a myriad of cosmic and environmental factors. One might wonder, in fact, if this porosity lends itself to the falseness and simulacra that are so rampant throughout the novel. And, perhaps most uncomfortably, we are consistently reminded that language, too, can be deceitful. The narrative veers toward and away from absurdity, coexisting with it in a disquieting fashion. If anything might become or mean something else, what can be trusted? And if everything melts into a liquid duplicity, is it possible to arrive at a solid truth?