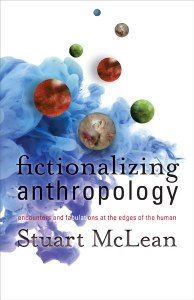 The other day I mentioned the Great Pacific Garbage Patch to a friend who hadn’t heard of it and he was understandably incredulous. A dead zone of plastic particles and synthetic sludge either as small as Texas or as large as the continental United States snared by and held within the North Pacific Gyre. Billions of tons of the discarded byproduct of our collective phantasy of consequence-free easy living metastasizing like a country-sized tumor out of sight, offline, and so out of mind.

It’s difficult to believe things like the Garbage Patch exist because it’s difficult to describe them. Our everyday language (tethered as it is to the very logical forms from which these monstrosities have inadvertently sprung) withers under a weight of strange ontological reality.

This withering is the starting point of Stuart McLean’s Fictionalizing Anthropology: Encounters and Fabulations at the Edges of the Human, a work which uses the decaying conventions of academic rhetoric to create a kind of speculative and essayistic social science nonfiction. After starting with an ancient Nordic creation story (the prehuman world is made of severed body parts), McLean writes: “How about melting ice caps, rising temperatures, seas, and CO2 levels, nuclear accidents, oil spills, e-waste, floating plastic garbage patches, along with climate change deniers vociferously ensconced at the highest levels of politics? Add to that the burgeoning economic inequality, ethnic, religious, and free-market fundamentalisms, wars, genocides, more than 65 million refugees, the prospect of border walls, immigration bans and mass deportations, and the world of the twentieth century begins to look no less precarious (or potentially transitory) than that of Eddic creation myth.”

Fictionalizing Anthropology seems to have two basic premises: 1) That our ability to describe the world we live in is defunct by virtue of clinging too tightly to the usual suspects (Cartesian duality, Aristotelian metaphor, the Enlightenment) . McLean, a professor of Anthropology, expresses it in terms of an opportunity to engage in “world creation”: “Could the capacity to imagine not only our connectedness to other beings but also the possibility of our radical absence from the scene be a prerequisite of thought and creativity, not least in our present and much discussed state of emergency?” And 2) that Anthropology as a field must also engage in this type of creative apprehension of the world: “Perhaps Anthropology stands to learn from art and literature not as evidence to support explanations based on an appeal to social context or history but rather as distinct modes of engagement with the materiality of expressive media — including language — that always retain the capacity to exceed and destabilize human intentions . . . anthropology might understand itself less as the study of an objectified humanity than as the open-ended, performative exploration of alternative possibilities of collective existence — of new ways of being human and other than human.” It’s an exhilarating position to start from — one so humble as to suggest that Anthropology as we understand it must commit a kind of suicide. And in return it will find itself sort of reborn as a mythos-poetic assemblage and world-creating god-art. Unfortunately, the hyphens are necessary.

A concrete example seems appropriate. On a farm called Hali, located on the southeastern coast of Iceland between the mountains and the sea, the folklorist, professor, and Oxford graduate Terry Gunnell had an experience that challenged her notions of both the strictures of Anthropology and the composition of reality itself. “As the encroaching fog dissolves the recognizable contours of the landscape she has studied, lived, and worked in, finally obliterating all points of spatial reference, the shepherdess-anthropologist describes herself as experiencing doubt, anxiety, and then an unexpected moment of certainty concerning the figure that appeared in the mist: ‘I knew instantly that it was a man of the “hidden people” [huldfólk] who visited me in the space of vision left to me and my ewe by the fog.’”

An actual experience of the parallel world of spirits and beings that populate Iceland’s mythology understandably rattles the objective social scientist’s notions of how her entire Anthropological project is performed. As she says, “the only thing that remained clear in my mind was the real experience of the materialization of the unreal,” or what she comes to call “the empirical unreal.” McLean explains that the challenge posed by the empirical unreal “is not least a creative and writerly one, demanding a continuous struggle against the tendency of form to solidify into convention, with the result that the texts begin to aspire to resemble not ‘life’ as revealed through ethnographic fieldwork but ‘genre’ as exemplified by other, similarly fashioned texts. Instead . . . ethnographic descriptions need to be framed in such a way that readers are ‘carried into new and thought-provoking worlds.’”

This is a radical reframing of ethnographic methodology, but it also forms an impressive artistic manifesto, if read in the right light. As such, it shouldn’t be surprising that McLean spends so much time exploring “Fabulation” as a method of exploring “a reality which can neither be relied on as objectively given nor reduced to the status of a cultural or linguistic construction — a reality of geologic prehistories, flows, becomings, and molten indeterminancies that seems indeed to render superfluous any accredited distinction between fact and belief, reality and representation.” The term fabulation, McLean tells us, comes from Bergson and is filtered through a heady dose of Deleuze. It’s a kind of art of the creation of myth which diffuses the antagonistic relationship between conditional metaphor and an underlying reservoir of ultimate truth. An artistic truth-act. A world-creation. McLean writes that “[f]abulation is always a collective undertaking, involving the relational becoming of an artist (or artists) and a people. Deleuze is insistent, however, that art and literature invoking a people yet to come do not create such a people. Rather, a people creates itself through its own resources, its own struggles and sufferings. Yet the fabulatory function of art nonetheless ‘links up’ to the creation of a people.” Or as another fabulator put it, “Things as they are / Are changed upon the blue guitar.”

This is all brilliant, even if much of it has been said before here and there in other contexts. To poach one of McLean’s well-used terms, it’s a wonderful assemblage of Anthropology and postmodern aesthetic theory, inflected with a healthy dose of cutting edge object oriented ontology, especially with regards to the creation of art appropriate for the age. I don’t know or care about the integrity of Anthropology as a professional field, as I don’t hold fealty towards any professional grouping, but I understand and applaud the imperative to make your work more closely cohere with your sharpest ideas and deepest held values.

But the merging of far-flung liminalities and au currant Deleuzian thought can occasionally miss the majesty of the mundane, the churning molten of the domestic. For instance, my grandmother is a Tarot card reader. It’s how she puts food on the table. She’s often told me that one day the figure from the Wisdom card, bearded and cloaked and carrying a staff, appeared in her doorway. She asked who he was. He replied “I am wisdom.” “Well, come on in, then,” she answered him.

This is a woman living in the “modern world” and not an indigenous community, and who has never heard of Bergson, Derrida, or Deleuze. And yet how she conceives of metaphor destabilizes rational, post-Enlightenment constructions of reality. It suggests that we don’t actually have to go far to find existing assemblages which challenge Cartesian modes of thought and empirical truth-production (fake news, anyone?), but that we might always exist in a sort of conflagration of opposing truth systems. It also calls into question whether it’s useful or even possible to think oneself into new modes of being. After all, the Inuit didn’t become Inuit after reading Nietzsche and Deleuze and deciding their focus should be on living out an ethos of liminality. They were, through eons of hard fact and togetherness, formed into themselves through the kind of mutual sacrifice necessary to form communities.

It makes you wonder if McLean takes seriously Deleuze’s insistence that people are not created through the simple invocation of academic discourse when he writes things such as “I wish to extend and pluralize the concept of montage, such that it can be taken to refer not only to an audiovisual or a textual method, or indeed to a sensibility and mode of engagement with the world, but also to a principle of creation operative across distinctions between the realms of the natural and the social.” Taken as a sort of artistic manifesto, or critique of Anthropological hubris, Fictionalizing Anthropology is beyond brilliant. But as a manifesto of consensual reality-creation, it fails by overshooting the mark.

Kierkegaard once commented that if Hegel had disclosed in the preface to his Logic that the book was simply a thought experiment, he would have been the greatest thinker to ever live, but that “As it is, he is merely comic.” A bit harsh, but the spirit of Kierkegaard’s critique should be kept in mind when reading Fictionalizing Anthropology. There’s a profound humility in sensing that our ways of communicating with each other have been challenged and disrupted by the ontological fact of monstrosities such as the Great Pacific Garbage Patch and climate change more generally. Our communities will be transformed by these challenges, and this book specifically goes a long way in imagining what these new ways of being together might be like. But the recipe is not the finished meal. And art isn’t wish fulfillment. Communities are forged in the very real heat of shared experiences and lived sacrifices, not in the minds of itinerant Anthropologists no matter how vigorously they embrace poesis. To think otherwise would be a kind of cargo cult in reverse.

Seeing Like a Smuggler: Borders from Below – ed. Mahmoud Keshavarz and Shahram Khosravi