My Heart Hemmed In – Marie NDiaye 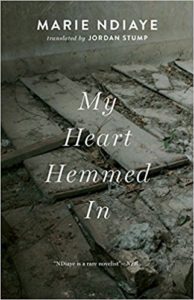 My Heart Hemmed In by Marie NDiaye begins with uncertainty, an anxious disbelief that this could really happen, not just in general, but, more alarmingly, that this is happening to them — ”exemplary, faithful, kind” middle-aged teachers like Nadia and Ange Lacordeyre. Their controlled middle-class existence shatters when, seemingly out of nowhere, they become pariahs to their neighbors, students, colleagues, and eventually, the city of Bordeaux itself. A stranger spits in Nadia’s face; the tram furiously rushes by her without stopping; the streets twist and elongate, as if with the single intention to confuse and expel. One day Ange returns from school afflicted by a mysterious, vicious wound on his stomach. As his condition worsens, Nadia must rely upon the unsolicited care of Richard Victor Noget, an elderly neighbor who had always been scornfully dismissed by the Lacordeyres. Their reversal of fortune forces Nadia into a nightmarish journey of self-awareness, where the habitually familiar is replaced by menacing fog. The first-person narrative traps us within her hunted/haunted perspective. She is our guide, though we begin to question the multiplying gaps between what Nadia reveals and what Nadia hides, what she knows and refuses to know.

In spite of me, in spite of my resolution to show Ange the most perfect tenderness and indulgence, a cold fury corrodes my words, because I can’t forget what I’ve learned from Noget, and I look at the suffering face of the man I so loved, who was a part of me (but evidently the most secretive, the most deceitful, the least honest?), and I picture that same face looking down at my granddaughter, the child they named Souhar, and then smiling at my son, smiling at that women I’ve never met, and then, at bedtime, settling onto the pillow so near my own face, displaying the same utter transparency I see in him now, even as I know he’s been telling me lies.

In a single sentence NDiaye captures the knottiness of Nadia: a performative perfectionism spilling into a resentful ego, discomfort over a loss of control, veiled mentions to a conniving self while taking extreme pains to dissociate this part through a fortress-like denial. The more the sentence expands, the more we become entangled in Nadia’s neurotically winding thoughts. On the surface she has built a smugly respectable life with her husband but their unexplainable fall from grace reveals the cracks: a hostile son, a betrayed first husband, abandoned family, willful ignorance and self-righteousness, a past swallowed up by shame and rage.

Originally published in 2007 as Mon cœur à l’étroit, Marie NDiaye’s spectral novel is her latest to be translated into English by Jordan Stump (who has translated a few of her works, including last year’s Ladivine). NDiaye’s prose takes on the properties of fog, cloaking the reader in ambiguities, red herrings, and uncanniness. Her sentences adhere to their own subconscious logic, eschewing accessibility for a prickly rhythm that “keep[s] her readers slightly off-balance, moving between certainty and doubt,” as Karl Ashoka Britto writes. A fantasticality courses throughout the novel, with Nadia encountering demonic pregnancy, a backyard of bones, and other bizarre occurrences.

The close intimacy between the real and surreal might lead some readers to question Nadia’s sanity — though stopping there deflates her as a character and NDiaye’s choices as a writer. My Heart Hemmed In is heavy in paranoia, guilt, and repulsion. The novel pulses like a frenzied heartbeat, as we work with and against Nadia to uncover the source of her ominous troubles. In mood the novel brings to mind two films: Andrzej Zulawski’s Possession (1981) and Claire Denis’s Trouble Every Day (2001; with Denis, NDiaye co-wrote the screenplay for 2009’s White Material). All three dissolve the polite boundaries between genres in favor of a furious style unafraid of excess or abstraction. Horror, often cited as a repository for our collective societal anxieties and repressions, is remixed to fit the particular vision at hand. In NDiaye’s case, the fear of being other is grounded to a ruining sense of personal shame.

Most reviewers see the shunning as a gesture towards intolerance, othering, and xenophobia. Characters matter-of-factly tell Nadia that “people like her” have fallen out of favor. NDiaye teases us by keeping things deliberately vague: does “people like her” refer to a hatred built along racial, ethnic, or class lines? The novel concerns itself with an accumulation of unsaid feelings rather than a safe, clear-cut message. NDiaye, who is half French and half Senegalese, drains the narrative of the usual markers of identity, leaving behind elemental psychological processes and beguiling allusions. She is less interested in naming the hatred, focusing instead on an exploration of how shame warps an individual’s perspective. Infected by a broader rhetoric fueled by suspicion and unaccountability, the external hostility experienced by Nadia reflects the internal repulsion she has harbored for years. Horrified by her immigrant parents and her “unrefined” upbringing, Nadia remakes herself as the perfect Bordelais citizen: exclusionary, judgemental, conservative. She feels protected by her wealth and gains a rabid pleasure from self-denial, turning her nose at people who flaunt their lavish lifestyles with expensive cars or “lowbrow” distractions. The Lacordeyres wear their austerity like a mark of moral superiority, unable (or refusing?) to recognize their shortcomings or the frequency with which they alienate others and themselves.

Take this exchange that occurs when Nadia is picked up by her son Ralph following her decision to leave Bordeaux. She has not seen Ralph since he moved away, disturbed by her inappropriately close relationship with his ex-boyfriend, Lanton. (So much is suggested, including Nadia’s attraction to Lanton’s whiteness, but NDiaye provides no concrete answers.) Claiming to be a “new man”, Ralph has built a life out of everything his mother despises, or so it seems to Nadia, as evidenced by his car:

And now I tell myself, deeply pained, now I find my own son feeling the need to display himself in just such an obscene vehicle.

And those two old people in Les Aubiers who happen to be my parents, how they ran to the window when their practiced ear told them an expensive car was pulling into the parking lot! . . . How I wish I could stop thinking back to that moment, how I wish I could eject them from my memory!

Stump raises an interesting point regarding NDiaye’s use of italics in this text: “Which is of course slightly odd: why does a first person narration need italics to represent the narrator’s private thoughts?” The italics offer a counter-commentary from a buried self, crafting a wounded portrait of a woman lost in the feverish maze of her mind. In one sense, we have a bereaved Nadia acknowledging the apparent frivolousness of her son. That sense is cruelly undercut by the italics and the barely-concealed rancor threatening to bubble over and scald. My Heart Hemmed In is equally about rejection — of family, language, desires, yourself. In the ruthless pursuit of status and respectability, Nadia sacrifices the core of her being, shunning intimate connection to anything that reminds her of there. This disgust is most apparent whenever she mentions Souhar, the granddaughter she’s never met:

And the odious thought of my granddaughter’s name once again floods my thoughts — yes, it’s an obsession, and it makes me grit my teeth till it hurts, and for a few seconds it so consumes me that I lose all awareness of the world around me.

My mouth filling with saliva, I murmur:

“Really, of all the names in the world, why that one?”

Within NDiaye’s breathless prose, these sharp moments destabilize and reshuffle the relationship between reader and narrator. We must sift through Nadia’s ellipses and redactions,  accepting that the fantastic cannot be dismissed as unreal. The narrative demands immersion and a criticality, or else we risk overlooking vital signals, we risk falling into the “cramped cage” that is Nadia’s heart. There were many moments where I thought I had Nadia figured out — it’s easy to dismiss her as selfish or delusional or meanly stubborn. But then NDiaye will present a cryptic line or a macabre image, shifting our assumptions and expectations in order to patiently unmask the convoluted (il)logic of Nadia’s psyche. “What sort of lesson is being forced on me by that intolerable name ‘Souhar?’” For Nadia, a lesson is akin to a threat, a reminder of all she ignores and buries deep. As she resists and succumbs to a variety of revelations and metamorphoses, the prose recreates this transformational energy on a sentence-level, giving shape to the unnameable and repressed.