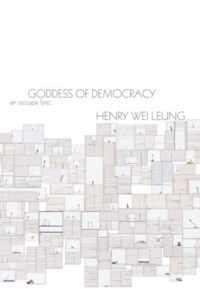 Henry Wei Leung’s debut poetry collection uses ethnographic and autoethnographic field work to create a musical, tightly woven text of unforgettable line after unforgettable line. This is a book for readers interested in documentary poetry, particularly poems crafted from participant observation, contemporary experiments with the lyric form, as well as anyone interested in questions about democracy and political protest. The tightly-woven themes, images, and techniques that echo across this volume shows the revision that must’ve taken place at the manuscript level, which makes this an strong example of how to put together a first book.

Leung’s source material includes firsthand experience in Hong Kong during a Fulbright year that coincided with the 2014 Occupy Central. Occupy Central, termed the Umbrella Movement in the West, began when it became apparent that China would not return the free and open election process for Hong Kong’s top political office back to Hong Kong. Instead, China proposed to let the people choose from a handful of previously vetted candidates. Hong Kong’s citizens responded by taking to the streets in a student-led protest that blossomed into a seventy-nine day occupation.

The book is titled after a statue that was destroyed during the Tiananmen Square protests in 1989. Replicas have since been erected in at least three countries including Hong Kong, the U.S., and Canada. The Hong Kong replica was veiled during the Occupation Central protests. The replicas refract through the book, folding in commentary about a clothing brand called G.O.D, which stands for Goods of Desire, and allowing the lyric “I” to wax about what it means to live in a democracy: “what if freedom just means shopping.”

The subtitle, an Occupy Lyric, gives an indication of what Leung does with this source material. The book is broken into six sections. While the text leans toward short-lined, free verse poems, there’s a virtuosic variation present, including list poems, translation, erasures, blackout poetry, prose poems, and a section of lyrical prose chapters. The poems themselves don’t feel dense, but because the questions and observations in this volume are so profound, the section breaks help to create much-needed pauses.

The speaker’s self-implication and self-examination throughout the book follows in the tradition of participant observation, the kind of subjective, vulnerable ethnography that Ruth Behar, who provided a blurb for the book, has advocated for in her career as an anthropologist. In addition to first-hand accounts of Leung’s witness to Occupation Central, we get bits of memoir, learning that his birth permit in China was forged and his family soon after immigrated to the U.S. His observer’s own story is inextricably connected to the history he’s living through: “And wasn’t I the forgery of a body never meant, never mine, never mind, so that someone in the rubble would forever look like me?” In the three-part prose section of the book, Leung reflects on the variety of outsiders visiting the protest camp: an Englishman holding a protest sign, Kenny G taking selfies, Zhou Fengsuo — who protested at Tiananmen Square — and Leung himself. Leung’s position as an outside witness, and also a participant, is integral to this book’s investigation. Through witnessing the movement as an outsider while reflecting on his complex position, Leung creates a rich, dynamic inquiry into our responsibility to one another. The eye that watches is always also turned inward. “Dear Exile” says, “So bear me away too. / And unbear me in you.” Leung’s source material is manifold.

Poets creating art from nonfiction are challenged by craft decisions about how to render factual details within the compact space of the stanza. Leung’s book comes up with inventive solutions for this challenge. First, he uses the epigraph. The journalistic quality of these snippets, like, “On 29 Feb 2016, a student leader in the riot ran in a by-election for the Legislative Council. He lost by a slim margin, but his radical campaign opened a conversation about Hong Kong’s independence from China,” has the expositive feel of a narrative voice-over. There isn’t an epigraph for every poem, so when they do crop up, these film documentary moments operate in the same way anaphora does, as a refrain. Leung also presents factual information in the form of a timeline in the back of the book, which is carefully woven into the manuscript in the form of erasures. For any reader who needs to see the chronology of the Occupy Central protests, there’s an outline at the end, and the timeline’s fragments, dropped like crumbs along the way, mimic memory’s fuzziness.

Through his choice of the lyric form, Leung is able to examine the “I” as a subject. His speaker travels the space between the self and the other and inhabits that space of being in-between. In the prose section three quarters of the way through the book, Leung writes,

I have stood on both sides of the water in one day. I can’t see right from wrong anymore. I can walk you through injustices until the land ends, but I can’t describe justice. Goethe said that to know is not enough; we have to act. But Gandhi said that none of us can know; none is competent to judge or act. How can we speak in an era whose censorship is not the blockage of information but the overloading of it, the white noise of privileged chatter?

These poems simmer with unresolved examination. I was undone by the questions, some of which are complex constructions that gallop out of the end of the sentence:

And I squat here

where a ragged dog has lain to rest

with such an effort of dignity

that when the time comes

to hose us down

which of us is decay

and which the sculpture of it?

Others are short and concise, entirely self-contained, like “Who have I suffered for?” and “Isn’t privation / a form of love?” and the question Cathy Park Hong quotes in her judge’s citation — this book won the Omnidawn 1/2nd book prize in 2016 — “what is freedom when divorced from from?”

One consequence of these questions piercing the text is that the surrounding song likewise blooms into something between a question and an answer. Take for example, this passage from the first of two poems in the collection called “Island of the Goddess”:

The earth was an eggshell

The sense of belonging

left a trauma on the body.

It was the body’s last trauma.

Here was a thing which changed my life:

I stood inside the calm eye of a storm

with wings enough to set the gates free.

The eggshell swallowed the storm.

This city — kissed by a chimera,

and even I spend my best years

in a golden future’s cage.

These reflective last lines, “even I spend my best years / in a golden future’s cage” sit the reader squarely in impassibility: the promise of a better tomorrow can become today’s trap. Through a present tense, imperfect statement, not “I spent my best years” or “I had been spending my best years,” but “I spend” as in “I am now spending,” Leung underscores the complexity of the cage’s confines. Seeing the cage does not make it disappear. While the end here is in the present tense, an earlier stanza uses past tense: “I stood inside the calm eye of a storm.” The speaker woke up, but once woke, once he sees that he has fallen for the future’s allure (the promise of capitalism or the promise of Gold Mountain, or the way in which both intertwine and call their union democracy,) how does he escape? Cathy Park Hong notes that, “Leung not only documents disobedience, but historicizes it, turns it to a global question, and asks what comes after.” This book skillfully grapples with those next steps, and the grappling itself becomes a step: what comes after? Bearing witness.

Laura Wetherington’s first book of poems, A Map Predetermined and Chance (Fence Books), was selected by C.S. Giscombe for the National Poetry Series. She teaches in Sierra Nevada College’s MFA Program and coedits textsound.org with Hannah Ensor. You can follow her on Twitter and Instagram.