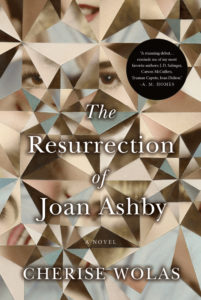 If you are a man there is no compulsion to compromise, no requirement to choose. Having a family need not impinge upon your career nor frustrate attaining everything within the limits of your intellect and ambition. But for every woman a choice must be made between the conflicting interests of family and career. She might choose with deliberation, owning her decision with full awareness of its consequences. Or instead she may chafe against the notion that she need choose at all, convinced that she can excel all at once with the requirements of motherhood and her vocation, compromising nothing along the way. The weight of this life-shaping choice and its ramifications for a woman who knows that she made the wrong choice are the tensions that drive The Resurrection of Joan Ashby, Cherise Wolas’ remarkable debut novel.

The eponymous Joan Ashby is a woman propelled by relentless ambition and extraordinary talent. By the time Joan is twenty-five she has authored two internationally acclaimed short story collections. Despite her vigilance against the “consumptive nature” of love Joan falls for Martin, a successful eye surgeon. And she marries him, sound in the belief that Martin understands that her writing career is and always will be her only priority and that like her, he does not want children. When only two months into the marriage Joan accidentally becomes pregnant she reluctantly gives way to Martin’s unexpected desire to have the baby.

From this launching point Wolas excavates the years-long emotional tumult of a woman who loves her children but loves her career much more, a reality that taints Joan’s relationships with her husband and two sons and roils her self-identity. Joan resents that her constant family obligations divert her from writing, a resentment that breeds both regret that she has a husband and children and guilt that she feels that way — a guilt that is redoubled by the shadow of her own strange upbringing as the only child of parents who shared an apparent indifference toward her:

How her parents had stared, as if her connection to them, her very existence, was an unsolvable puzzle . . . How they inclined their heads toward each other in those long minutes in the living room, and later at the kitchen table, telling each other about their days, neither ever asking Joan a question about anything.

This parental ambivalence cultivates in Joan a fierce independence and a disdain for emotional vulnerability. It also leaves her abandoned to the imagined worlds and characters of her writing, a pastime that, over time, becomes her life’s sole purpose.

When her first son is four and she is pregnant with a second the mounting distress over her failed attempts to write a first novel culminates in an existential crisis, to which she reacts by resolving to compartmentalize her life:

It was the first Joan Ashby, the realest Joan Ashby, the one who was neither wife nor mother, that she was in immediate danger of losing . . . she needed to reframe her existence, fracture her life, bifurcate Joan Manning, wife and mother, from Joan Ashby, the writer, erect boundaries to prevent any accidental bleeding between the two.

The strain of this self-imposed duality and her conviction that Joan “the writer” is the true, authentic Joan while Joan, mother and wife, is a lesser Joan, infects the Mannings’ quiet domesticity. Joan’s inability to reconcile her two selves sets the stage for a cruel betrayal that irrevocably rents the family’s fabric.

Joan’s striving to bifurcate her life affords Wolas the opportunity to explore how a life’s rhythms, distractions and experiences influence the creative process. And, also, how an artist’s life irrepressibly leaches into her work, which Wolas demonstrates by seamlessly knitting into the narrative about Joan, excerpts from Joan’s fiction which reflect Joan’s deeply held belief that it is futile to try to live in a way incongruent with one’s destiny:

Sometimes against her wishes, her heart turns tender, and she nearly hopes Howard finds what he is after. She thinks it likely they may never see him again, that in order to move on he will need to forget he once had a hand in creating a world he didn’t want. She thinks destiny will always win out over second-best, that it’s an impossible burden on those left behind.

Through this and many other of Joan’s writings we see what Joan refuses to — that she has not and cannot inoculate her writing from her life; that her art and her life are symbiotic.

Perhaps most interesting is Wolas’ interrogation of personal ambition, which she examines not only from the vantage of society’s double standard toward the demonstrated career ambitions of a mother of young children versus a father, but also by looking at how personality and individual experiences determine the resilience of ambition. Wolas draws contrasts among the four members of the Manning family, each ambitious in his or her own way, but most significantly, between Joan and her eldest son, Daniel, also a writer. While Joan’s writerly ambition seems indelibly imprinted from childhood (due, at least in part, to her isolation), young Daniel’s ambition to become a writer is fragile and is nearly extinguished by his feelings of inadequacy to ever meet his mother’s measure as an author. Wolas’ vivid, revelatory writing cracks open the intricate and subtle shifts in how Joan and Daniel see themselves and each other as mother, child, and writers.

Late in the novel Joan makes a pilgrimage to India, a journey that proves to be transformative. But contrary to the suggestion of the novel’s title the trip does not bring about a resurrection of Joan’s former, “writer only” self. Instead it results in her surrender, not to the idea that a woman needs to be a mother to be complete, but rather to the reality that the need to be nurtured and nurture others in turn is an inherent grace of humanity. That it is allowing ourselves to be vulnerable to this need that enables the experiences of personal joy and pain that vitalizes art, that makes art powerful. And there is power in the artistry of Cherise Wolas’ empathetic and resonant portrait of Joan Ashby, a woman who struggles every day to understand herself and to live the life that is true and authentic for her, despite demands and expectations to the contrary. Joan Ashby is every woman.

Lori Feathers is a co-owner of Interabang Books in Dallas, Texas and the store’s book buyer. She writes freelance book reviews and currently sits on the Board of the National Book Critics Circle. She can be found @lorifeathers.