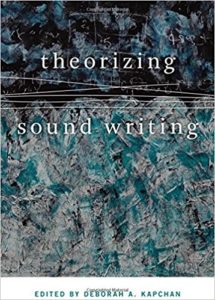 Theorizing Sound Writing responds to the curiosity of an audience that wonders how the ways we use written language interact with the ways we think about aural language. Its pages consider what it means to listen and how we figure ourselves as listeners, especially across time and cultures. The collection situates its reader in the midst of a scholarly conversation on what it means to write and think about sound. Ethnomusicologists, who lead the rapidly growing field of Sound Studies, comprise the majority of the contributors. The collection often circles back to the work of its editor, Deborah Kapchan, who is a professor of performance studies at NYU and a mentor for many of the contributors. Published by Wesleyan University Press, an academic press known for its publications in contemporary poetry and the arts, Theorizing Sound Writing displays the press’s appreciation for creative integration of form, art, and scholarship.

Kapchan begins by asking the reader to confront the complex role of listener, especially in ethnographies, as not simply a passive ear, but as an interactive member of the social space. “How listen to our own listening with others?” Kapchan asks in her introduction. Just as there are “speech acts,” there are also “listening acts.” What, then, are the “genres” of listening and how does listening act in the world? Theorizing Sound Writing describes itself as not just describing or analyzing sound, but as a form that “is the inscriptive dimension of listening” — the trace that listening leaves behind. This goal is, in itself, perhaps the most innovative component of the collection: listening often goes under-analyzed in sound studies texts. Yet, even with Kapchan’s strong leadership in the introduction, attention to listening and listeners too often falls off once the chapters launch into their source material. Kapchan begins with a bold invocation to consider the many forms of listening, but this goal seems to have been only superficially attended to by many of the contributors.

The authors of this anthology ask readers to consider how listening is “layered” — how the urban soundscape filters through one’s headphones to provide additional background for this week’s episode of The Moth. One writer describes the process of recording himself listening to a recording of himself listening to a recording — an acoustic hall of mirrors in which the ambient noises gradually take over. Another considers how the outdoor rehearsal of an a cappella group might resonate for the New York police officers with the echoes of Occupy’s human microphone.

A particularly fascinating chapter by J. Marin Daughtry considers the palimpsestic layers of history within a given piece of music. Daughtry traces the layers of rewritten lyrics and lifted tunes that resonate within a particular piece of music. An exceptionally bizarre layer studied by this author detailed how this contraband music was traced into the discarded hospital x-rays due to the lack of standard recording supplies in the postwar Soviet Union. “Heartbreak Hotel” swirls around an all-too-apt picture of the rib cage and chest cavity; “Cheek to Cheek” is accompanied by the circling image of a pelvic x-ray.

These eerie recordings on swirling sternums and broken femurs continue to haunt Theorizing as it moves through the melismas of Muslim singing cultures and South African rhythms in future chapters. The text becomes a written jukebox, saturated with the imagined sounds of a host of situations and cultures. Like many, if not most, sound studies texts, the collection predominantly studies musical instances. Reading it feels almost like wandering through a folk music festival, where in strolling from one block to the next you find yourself gradually shifting keys, rhythms, and modes. The transition spaces, where one tune lingers in the depths of your ear even as the new sounds filter in, are the most interesting.

Rather than attempting to force a homogeneous tone, Theorizing gathers together essays that vary considerably in approachability, style, and focus; some chapters offer a bold, even playful alternative to conventional academic discourse and others take a more moderate path. Theorizing is more self-referential than many academic projects, and its authors have made a happy escape from the middle school strictures against the dreaded use of “I.” The variable narration that stems from a collection of first person ethnographies makes for an intriguing medley of often quite disparate materials and modes of inquiry.

Each chapter is clearly expert, but for the outsider, it is the movement between different practices and focuses of each author that makes Kapchan’s introductory interest in listening most apparent. Although some of the chapters do ask the reader to think beyond the texts at hand to consider how sound and listening function more broadly, many of them prove forgettable in their dedication to the facts of a particular scene whose bearing on anything beyond itself is never made vivid. In any individual chapter, Theorizing Sound Writing rarely lives up to the innovation claimed by its opening pages and too frequently falls into an academic drone. Rather, it is the hum that lingers in the interstitial spaces and after reading that have a lasting impact as we continue to ponder how linear writing could best express the multilayered experience of sound.