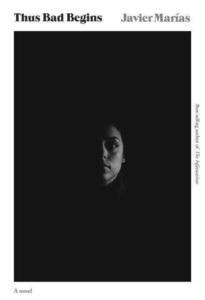 Some way into Javier Marías’s latest novel, Thus Bad Begins, Juan de Vere, the narrator, chances upon “a small lumber room.” He crouches into position and discovers that he has an excellent view of the door on the other side of the hallway and the woman in a nightdress pacing in front of it. “Please open the door. It will only take a second, I promise,” she pleads. “Don’t you get bored making the same scene over and over?” answers the voice on the other side of the door, to which she replies: “I just want to embrace you, it’s been ages since I did.” The back and forth continues. Hers is a “cautious” tone, precavido, Marías tells us. His is obdurate, thwarting each of her advances with measured irritation and contempt. After a few pages, an uncomfortable silence takes over. Suddenly, he swings open the door.

He placed his hands on her shoulders as if he were about to shake her, and I was afraid he would give her a shove and send her flying, and if she did fall, she might hit the back of her head on the wall or the floor, just one sharp blow and she could be dead, anyone can die at any time. [He] was clearly in a violent mood, and I feared that things might get out of hand, that he might lose control.

Time stops. We hold our breath and hope that the worst doesn’t transpire. Time stoppage isn’t unusual in a Marías novel. As Eli S. Evans once put it in n+1, his books “do not move forward.” But Evans was referring to Marías’s fame as a champion of endless digressions, which also serve to remind his readers of the writers he’s translated: Lawrence Sterne, Henry James, William Faulkner. Here time stops for a different reason. Suspense, not digression, is the pause button for this scene, one of the novel’s rare moments of action. It is also Marías’s metaphor for Spain’s transition to democracy.

Thus Bad Begins is largely set in Madrid in 1980, five years or so after Franco’s death and two years after the passage of the current constitution. By 1980, Spain’s transition to democracy was in full swing, but appearances aside, the country was in a moral limbo. Many still feared that a military coup could, at any moment, reinstall the dictatorship. (In fact, a failed coup would take place two years later, in 1982.) When the ’90s began, fears of a coup had all but evaporated and the protagonists of the transition had become national heroes for having brought about a peaceful change of power. Nearly forty years later, Spaniards are becoming more ambivalent about the purity of the transition to democracy: many now question the Amnesty Law, which shields Franco-era crimes, and similarly objectionable agreements made at the time. Scenes like the one at the door — of abuse and near domestic violence — are Marías’s retort to such criticisms, ways of reminding Spaniards that they no longer live in the limbo of the transition years.

Divorce, in Marías’s telling, wasn’t just an upgrade to gender relations under Spanish democracy; it was akin from going from a landline to a smartphone. And he takes every opportunity to remind us of this. “Divorce did not exist then” is a phrase that appears in the novel over and over again, like a push notification on the fritz. Divorce had been legal during the Second Republic (1931-1939) and would be legal again in 1981, much to the consternation of the Catholic hierarchy. The forty-year interim of Franco’s fascist regime, in which the novel takes place, saw many thousands of women trapped in cycles of violence with no legal means to escape them. A spokesperson for Spain’s Episcopal Conference warned in 2005 that now “it costs much less to get a divorce than it does to cancel a phone plan.” Marías’s novel can largely be seen as a rebuttal to such glib criticisms of the country’s transition from dictatorship. But at the same time, his narrow emphasis on divorce misses how slowly societies tend to adapt to changing laws. At the end of the day, a smartphone is still a phone: divorce, according to many critics to Marías’s political left, was a significant but still cosmetic change that never got to the root of what is today in Spain called violencia machista (“chauvinist violence”).

Marías, perhaps Spain’s most celebrated novelist and whose name is perpetually in the rumor mill for the Nobel Prize of Literature, has been circling the question of divorce for some time. In The Infatuations (2011) the female narrator — a first for Marías — watches from the other side of the coffee shop as a married couple sip their espresso every morning before, one day, they disappear. When, weeks later, she finds out that the husband has been violently murdered and that the murder was organized by an acquaintance who was in love with the unknowing wife, she wonders why divorce never appeared to be an option. Divorce crops up less dramatically in Marías’s trilogy, Your Face Tomorrow (2002-7), when Jacques Deza, the narrator, realizes that his new mentor at Oxford is, in fact, the brother of his deceased old mentor. Their different surnames owed to the fact that one of them, a Hispanist named Peter Wheeler, took up their mother’s maiden name after their parents’ divorce. And in A Heart So White (1992), the tangle of a love affair abroad and its discovery back home elicits an offhand contrast between the status of divorce in Spain and Cuba: “If we’d got married under Cuban law we could have got divorced when I met [her], they had divorce there.”

By the time we encounter Beatriz Noguera and Eduardo Muriel, the man and the woman of the scene at the door in Thus Bad Begins, they have been married for over two decades. Muriel has just hired Juan, the narrator, as his personal assistant. Juan’s job affords him a lot of time to observe the couple. Although Muriel maintains a gregarious and generous attitude toward others, “with Beatriz Noguera, he was often sharp and malicious, even cruel and hateful, verbally that is,” the last qualifying phrase included as if to preclude a defamation lawsuit. Perhaps she’d committed an “unforgivable offense,” he figures. But he leaves it at that.

Like in The Infatuations, Marías gives the impression that he is presenting a feminist perspective in Thus Bad Begins. Juan’s face-to-face confrontations with some of the novel’s most chauvinistic characters appear heroic amid the atmosphere of accepted misogyny in Madrid’s famously bourgeois Salamanca neighborhood. Juan’s dissatisfaction also sometimes does the work of balancing out the novel’s male-heavy protagonism. But his actions are undermined by the fact that, like the figures he confronts, Juan is not a very sympathetic character. He comforts Beatriz until he manages to sleep with her. He is “an unconditional admirer” of Muriel, but much of what he sees of Muriel involves him abusing Beatriz. Given who’s telling us the story, Marías’s gestures toward incorporating women into the novel feel forced and more than a bit insincere.

The hundreds of pages the novel spends describing Juan’s obsession with Beatriz should not distract us to the fact that its focus is his reverence of Muriel. Like so many young Spaniards of the transition, Juan never questions his elders, as though pointing out Muriel’s hypocrisy might lead to the return of the Franco regime. The same sentiment courses through Hamlet’s famous lines from which the novel borrows its title and the view of hindsight: “I must be cruel only to be kind:/ Thus bad begins and the worse remains behind.” Though the action takes place in 1980, the novel is narrated in the past tense and from the point of view of our present. Yet Juan, our narrator, seldom, if ever, questions the thoughts or actions of his twenty-three-year-old self. We don’t encounter any ironic asides, parenthetical self-criticisms, or ashamed interjections. We instead get an unadulterated version of the past. We’re told that Juan has excellent memory, or, as Muriel puts it, uncanny “attentive and retentive abilities.” But Marías makes precious little of the more than thirty-year gap between the time the events took place and the time when the story is being told.

The novel never examines the historical period in which it is set. And repeatedly notifying the reader that “divorce did not exist then” doesn’t help. If anything, it reveals Marías’s own anxiety about his reader’s inability to perceive any difference between then and now. Despite the passage of the divorce law, a failed coup, and everything else Marías has praised in Spain’s transition to democracy, the novel itself suggests by way of silence that not much, in fact, seems to have changed. Sexual abuse and violence against women certainly didn’t go away once Spain adopted its 1978 Constitution. For many, the novel is very much set in the present. In the last decade or so, a new generation which, thanks to the Great Recession, is known as la generación perdida (“the lost generation”) has dared to criticize the transition to democracy. They’ve taken issue with the country’s disregard for women’s rights — abortion rights were curbed in 2015 — and for never fully exorcizing Spain’s Francoist demons. It is hard enough in Spain to challenge the legacy of Franco; it is harder still to challenge the legacy of the transition.

Marías, not only in novels but also in newspaper columns for El País, continually defends the transition as unimpeachable. In March, he used one of them to fire a warning shot: “It’s about time that the Spaniards who want a free and democratic society . . . realize that the one that we’ve had for the past forty years (as imperfect and frustrating as you want to call it) is being threatened on too many flanks,” he wrote. His evidence: “Spain is still full of people who admire Franco, and the worst is that they’re nearly in every party, whether right or left.” Whatever is truthful about the first part of that sentence becomes lost in the trolling of the second part. As in the novel, it appears that those forty years have provided Marías with only the appearance, and not the experience, of hindsight.

In his April 13th column, Marías announced that he’d just finished a new novel. He didn’t specify what it was about. Just that the manuscript reached 576 typed pages and that his wife — “my first and perhaps best reader” — had made it, so far, to page 200. “The title still hasn’t been decided,” he wrote. “But,” he continued, “it could be [called] Berta Isla in order to be enrolled in that very long and often noble tradition: Jane Eyre, Anna Karenina, Madame Bovary…” If that novel is anything like this one, it will indeed become part of another “very long and often noble tradition” of novels about women trapped in abusive relationships: Jane Eyre, Anna Karenina, Madame Bovary . . .

Bécquer Seguín is an assistant professor of Iberian studies at Johns Hopkins University. His essays and criticism have appeared in The Nation, Slate, The Awl, the Los Angeles Review of Books, and elsewhere.