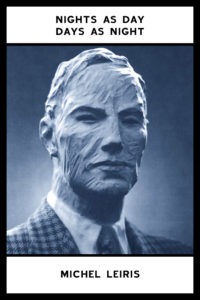 Incessant rain. I rode city buses all day with my special needs trans son Vee who I don’t see often for complicated reasons. We were standing, Vee in front pressing their back into me as the gray city streamed by the window. We debarked at intervals to buy treats and Adventure Time themed paraphernalia. All the while, I was very worried about my bike shoes, both about potential damage to the cleats and damage the cleats might inflict on any surface I walked on.

Here, a synopsis of a recent dream. So do you know more about me now, a stranger? About humans in general? Or do you merely have a failed micro-narrative that sticks longer than it ought to for its ghostly incompleteness? Have you already stopped reading so bored, so annoyed are you by the presumed intimacy? As in, do I have to give a fuck about your psyche, too? Everybody and their psyches. Michel Leiris’s Nights as Day, Days as Night is first off a forty-year dreambook. And it is occasionally frustrating as I am often frustrated when a friend gets a faraway look in their eyes over breakfast and (here comes) out spills another bout of narrativizing last night’s brain effluvia, what might be better left alone, inside. The nights in question span near half of Leiris’ life, during which he managed to publish wildly in French — ethnography, poetry, essays, fragments — and less wildly in translation. A career long enough for an English market to have shown periodic waves of interest, attracting writer-translators like Richard Howard and Lydia Davis, however likely to be eclipsed by the company he kept, friends like Bataille, Sartre and Bacon (the painter).

But as I keep reading, a surprise charm accumulates. The sometimes precision of the dates, and sporadically locations, that accompany every dream adumbrates a night map of forty years worth of sleeping. Even the notation is satisfying. It wasn’t the dream of the 19th or 20th, but May 19-20, occurring within the en dash of duration, resolutely un-Gregorian. Helps that Leiris was an ethnographer by profession and Surrealist by association. The sentences come off with a pleasurable plainness, at once clinical and compassionate, that does not markedly shift whether describing the interior of a friend’s town home or Jesus among the boughs of a meat tree come to proclaim the Republic. Plus anything Continental acquires a Sebald-style subterranean pathos for having occurred between 1939 and 1945. As literary artifacts (we learn in the translator’s note he considered the collection among his poetry), we are treated to the magic fungibility of experience, the or of the dream. Are we on a terrace or in an aqueduct? Is the sex with the author’s wife or someone who resembles her? “Rimbaud? (Or Limbour?)” Questions that fall like opened traps onto other questions. Is the France in this dream regular or Occupied? Is it from the vantage of the ethnographer or the subject of study? Is it documentation or literature? And what about the ephemera of the (un)consciousness, does it matter or not?

Lydia Davis’ blurb is instructive in that reading Nights as Day today as opposed to 1961 when first published is like nothing so much as the fleeting impressions of Davis’ Can’t and Won’t, that lovely omnibus of micro-fictions/figments/fragments. There is a certain capaciousness (or alternately claustrophobia) that any and everything perceived — whether read, dreamed, observed, heard or experienced — be subject to a handful of dispassionate sentences, pared of context and, for the most part, the cruft of having to mean more than itself. That might be what makes Leiris’ collection so compelling, how prone the oneiric is to acquisitive theorizing, plumbing and shoring the dreaming subject’s consciousness, and how deftly Leiris mostly avoids this. He holds the dream up to the light, how the facets catch and sparkle, and promptly falls back asleep.

Where there is commentary, it appears as a patina of self-reading and rereading that is strangely out of time. In one dream (September 3-4, 1933) he includes an uncharacteristic aside: “As I write this all up, basing it on notes that are more than twenty-five years old, I am struck by a detail whose singularity only stands out for me only today.” This is what we expect from autobiography, the old self in contact with the new in a single matter/anti-matter bolt of meaning. And this is what makes the work so unnerving: how a few passages like this one get the full treatment of an adult subject performing auto-psychoanalysis, while others must have been tweaked or toyed with at irregular intervals, and still others, the bulk of the book I’d guess, likely skated through unchanged decade after decade. The result is palimpsest rather than mise en abyme, porous and inventive in a way that breathes in a form that otherwise risks monotony at every turn.

In a certain light, the collection reads as a companion to Manhood, Leiris’ more widely read self-ethnography, which quotes a handful of the dreams compiled here. As though these nights run parallel and submerged alongside the murky daylight of that work. Or maybe the other way around, is this the text and Manhood the footnote? In the translator’s note, Richard Sieburth suggests “dreams are the fieldwork of the self,” but that is not what makes this collection worth the time. While “a fieldwork of the self” is clearly how much of Leiris’s other work operates, this book resists. The action here is not in combing over existing terrain but assembling that terrain, over and over. The action here is placing words on a page. As Maurice Blanchot warns us in the introduction: “These were once dreams; they are now signs of poetry.”

The brownish color of its coat as well as the vulgarity of its cordiality convince me that if I shake its hand, mine will be sullied by some sort of filth or excrement. But at the camel’s insistence we end up slapping palms, executing the traditional gesture that accompanies the expression, ‘It’s a deal!’