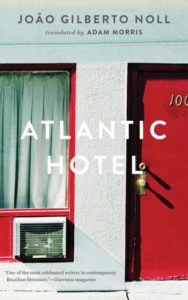 What might happen if I were to begin writing this review from memory? This is, to elide synopsis and instead recall for you what I remember happening in João Gilberto Noll’s novel Atlantic Hotel? A middle-aged man is mistaken for a famous soap opera actor. A man leaves a bus mid-journey without notifying anyone else onboard that the woman sitting next to him has quietly committed suicide. A man is granted refuge from . . . two hired killers? his own poor choices? in an old church, or perhaps a monastery. A man, battered by a sudden storm, passes out. He wakes to find his leg has been amputated for no apparent medical reason, and the surgeon who performed the procedure may be a proto-fascist, his atavism compounded by his fascist leanings.

I count this as an important rather than idle exercise for several reasons. First, the man in all these episodes is our narrator. And yes, he is that passive and that anonymous; that imploded a hero. Secondly, “because” is a very scarce word in this book. César Aira may be our greatest improvising novelist, but Noll — who passed away less than a month before his 71st birthday this April — can be counted nearly the Argentine’s equal, even if he eschews froth and whimsy (occasional in Aira’s work anyway) for the jolt and retch. Finally, because Noll’s books are so slim, their narratives simply don’t hang around long enough to sock much away into the reader’s long-term storage banks. His novels are very “present,” but they seem to shrug themselves into this mode, one that more renowned authors have attempted to vault themselves into with the most harrowing of avant-garde prosodies.

But Noll? With this only the second of Noll’s novels to appear in English, Anglophone readers are in the privileged position of being introduced to his imagination, which is more architectural than ornamental. The austerity of Noll’s style might upset the expectations of readers accustomed to the more Tropicalistic expressions of high Brazilian modernism. Noll actually has more in common with the Noigrandes poets and their avowed interest in the “tension of word-things in space-time.” The contingency of events in a Noll novel may seem permanently on the verge of lifting off into full-fledged fantasy, but the writing itself consistently yields to the insistent mundanities of the concrete. “I got dressed. One of my socks had a hole in it, exposing my big toe. I hastily yanked on the part with the hole to cover my big toenail, which needed trimming.” And where does this transpire? In a brothel.

Noll treats the shopworn dreams of the dominant culture to the same anxiety-inducing indifference. In Atlantic Hotel, women are for seducing (more accurately, “conquest”: raping); “colored people” are, at their best, physically capable helpers (nurses and babysitters), at their worst duplicitous voodoos, grinning soul-stealers; all political motives are cryptic, and that they ultimately further the self-aggrandizement of those in positions of authority is somewhat beside the point. Then again, this is true “realism.” These are the narratives, repeated in countless other stories — and now Noll’s reference to soap operas doesn’t feel so glib, or incidental — that prop up the actual conditions making much of life contemptible. The substance of life, as it turns out, isn’t substantial, or only as substantial as ideology and the sanctions it confers. But how it all matters! For Noll, that matter primarily takes the form of violence. The violence of addiction, greed, of institutions (church and state, largely), the violence we do in othering one another, and the violence we do to ourselves in the name of becoming what we believe we wish to be.

How is it that Noll’s mirroring of these tropes isn’t completely intolerable? It seems like cheating to credit Noll’s mastery of atmosphere — call it ominous, or creepy, or even beguiling — but it is a factor. Noll is imminently, treacherously renderable. Call it honeyed cynicism. But, the savor of this superficial transgressiveness eventually acerbates. Sure, Noll appreciates that all tellings are retellings, but not in the simplistic, po-mo sense that all stories allude to each other, much less according to the naysayer gospel that history repeats itself. Rather, Noll seems genuinely to want to share his fascination with how entropy supplies the (dark) energy that drives storytelling. In wanting so badly to make sense, stories only reveal the senselessness of life. As the narrator reports after listening to his accidental benefactor Antonio recall his years living in room, “[l]istening to the story about the ravenous nun while sitting in that frock had left me in a state of discomfort I hoped to dispel by walking around outside.”

Then again, it’s not life’s fault that it does not agree with our arbitrary, narcissistic standards of coherence. Atlantic Hotel, like Quiet Creature on the Corner — also beautifully translated by Adam Morris and published by Two Lines Press — can be read as an entropic allegory. Which is not to say that, with all their events bled of intention and explanation (reasonable or not), Noll’s novels are allegories of entropy. Rather, they feel like controlled experiments in allowing entropy’s powerful acid to eat away at narrative’s machinery, destabilizing its easy correspondences and transmuting the dross of “character,” “genre” and “plot” not into some priceless substance but a state as visionary as it is toxic. Indeed, there’s a decidedly fumy quality to Noll’s writing; a whiff of those devil’s materials Blake employed in his printshop. So the entropy in Atlantic Hotel is built in.

Case in point: near the end of Atlantic Hotel, Noll’s narrator suffers a classic Freudian castration. I.e., one that is largely symbolic. But it isn’t symbolic in the sense that it affixes itself to a thematic concern. The amputation the narrator suffers is just another remnant of a world that believes it has achieved some understanding of itself. Granted, as Atlantic Hotel is a kind of picaresque, this befalling robs the narrator of his ability to keep moving — and to keep dodging responsibility through the power of his assumed celebrity. Certainly it would be folly to look for redemption in a novel that contains more carcasses (corpses feels much too euphemistic) than it does characters. Yet Noll is not disinterested in the consequential. His narrator is an instinctual if not pathological liar, and his falsehoods have a way of confusing opportunity and misfortune. And, like the classic sad-sack gumshoe, Noll’s narrator can neither go straight nor reconcile himself to the most incriminating elements of his existence. No wonder the last 25 pages of the book find him in a drugged torpor, easing himself into unconsciousness with speculations “that one day . . . I would understand why all this had happened.” (Still, Atlantic Hotel‘s moral compass is far wonkier than even the most clever parody of a hardboiled detective noir.)

Further remarkable about what happens in the novel’s final act is how it frustrates rather than complicates. It serves a function not unlike foreshadowing, only in reverse. The novel has barely broken its in media res opening before “a body covered by a patterned sheet” is being removed from the Copacabana hotel into which the narrator has ducked. A few pages later, the narrator looks in the mirror and takes an inventory of his person: “I saw deep circles under my eyes, skin all scaly, parched lips. I slid my tongue along an inflamed cavity in one of my teeth, figuring it wasn’t doing me any good to stay here enumerating the signs of my body’s deterioration. The time to leave had come.” (Later, he describes himself as “used-up.”) But the only thing animated, coming and going, in Atlantic Hotel is the terminal predicament seemingly frozen in these glimpses. It’s a tribute to how adroitly Noll exercises his audacity that he manages to get away with the final words of this book being “the end.” For it’s not that every ending in Atlantic Hotel is a new beginning. Quite the opposite. And, in that contradiction, there could be a glimmer of something purposeful.