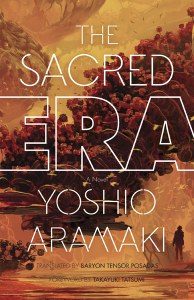 The genre of science fiction is undergoing an identity crisis of sorts. “Identity crisis” isn’t even the proper term, for what I mean here is a temporal crisis. Science fiction today is no longer wedded to the future. This is a drastic change, because for most of the twentieth century, “science fiction” necessitated a future: the relatively proximal and disturbing futures of Arthur C. Clarke’s 2001: A Space Odyssey or Ray Bradbury’s Martian Chronicles or Philip K. Dick’s Do Androids Dream Of Electric Sheep, or more far-flung futures like that in John W. Campbell, Jr.’s short story, “Forgetfulness”. Whatever the prologue of A New Hope might claim, the Star Wars series takes place in a galactic civilization whose technology and mysticism are more advanced than ours — a future that took place a long time ago, but a future nonetheless.

But science fiction at some point ceased to be anchored to the future. Aficionados may be able to pinpoint other key moments, but I can think of two: Terry Gilliam’s 1981 film Time Bandits, which features multiple jumps between present-day Britain and pivotal junctures in human history (Ancient Greece, England at the time of the Crusades, the Napoleonic Wars, the sinking of the Titanic), and Kurt Vonnegut’s 1969 novel Slaughterhouse-Five, in which Billy Pilgrim is able to become unstuck in time. (The long-running television series Doctor Who is yet another obvious example.) Science fiction, thanks to these works, is less about the future than the friction between the present or future and the past. Add to this the current wave of retromania, whereby franchises like Alien, Star Wars, Blade Runner, and Ghost in the Shell are being rebooted or continued, and other new films (Life; Arrival) that are clearly derivative of older films (Alien; Contact, respectively), and we see signs of an atmospheric change. Formerly preoccupied with imagining the future, science fiction is more inclined toward future anteriority.

While we could veer off here with handwringing and speculation on what this lack of future means for us, our time could be better spent reading Yoshio Aramaki’s 1978 novel, The Sacred Era, translated for the first time into English by Baryon Tensor Posadas. Here, both the story and its confluence of literary influences make this book emblematic of science fiction’s temporal rootlessness. So, for the plot: the protagonist K travels to the city Igitur of the Holy Empire where he takes and passes the grueling Sacred Examination. This test bestows great privileges and opportunities on K, a poor young man from the provinces who is intrigued by rumors of a heresy that plagued the Holy Empire centuries before. K’s intellectual and spiritual aptitudes win him an assignment on the Planet Bosch, a veritable garden of earthly delights that, like Hieronymus Bosch’s famous namesake painting, teems with undreamed pleasures and monstrosities. On his way to Planet Bosch, K passes through other gardens replete with temptations and fantastic impossibilities: harems, monasteries filled with hard-drinking novices, phallic spaceships that dock into womblike galactic transports made of living tissue. All these elements are cleverly woven into satisfying space opera. But the one element that, intrinsically and extrinsically, muddles our sense of time is the central mystery of Igitur. That the name “Igitur” means “therefore” in Latin, and that Igitur’s ecclesiastical hierarchy seems reminiscent of Catholicism, right down to its pope, infuses just enough of Earth history into what is otherwise uncharted fiction. K early on comes across evidence that the Holy Empire’s infamous, long ago executed heretic, Darko Dachilko, haunts the present day. Dachilko makes his presence known to K in ways first subtle and then gross: as a nurturing teacher and father figure during K’s childhood, then as less benevolent figures. K staggers in vertigo with these manifestations of the ancient Dachilko in K’s own past and present, and the novel concludes in a temporal maelstrom, neither squarely past nor present but somewhere in between. One of the several elegant details that Aramaki adds to this story is the curious nature of Planet Bosch, which is a planet made up entirely of plant material that wanders listlessly in space, only vaguely orbiting its planet. Like Planet Bosch, K and the reader are adrift.

Putting aside its plot, The Sacred Era is dizzying but compelling because of its stylistic and narrative decouplings of time. The novel features a pleasing amalgam of science fiction conceits from the 1960s and 1970s: the post-apocalyptic dystopia, the hero’s space saga, and the fantasy of a swinging, sex-filled paradise are all in high supply. But what elevates The Sacred Era above mere pastiche are passages that underscore the unrooted essence of K’s world:

The previous night was a sleepless one for K. His mind tossed and turned with his recollections of all that has happened, making him slip in and out of consciousness, in and out of dreams. He sees a vision of peeling off a transparent filmy membrane, one layer after another, like a molting cicada casting off its old shell. But with each layer he peels off, the world seems to slip away further. Once one layer comes off, another world reveals itself underneath, only to again lose all color. This ceaseless meaningless repetition slowly drives K toward madness.

Temporal disorientation and layering not only pervade the plot, but the writing itself. That The Sacred Era was only Aramaki’s first significant work makes sense if one considers that he has gone on to write successful speculative historical fiction (imagining, for instance, that Japan had emerged victorious in World War II). Past and present and future commingle in Aramaki’s worlds as do the flowers and weeds in an overgrown garden, where the pleasure lies in getting lost and losing track of time.