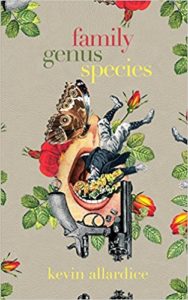 Is it because I have such a robust store of exasperating personal experiences with Berkeley’s progressive parenting class to call upon that I found Family, Genus, Species, Kevin Allardice’s second novel, so deliciously amusing? Is it because I myself have frequently encountered the kind of fathers he writes about — a particular strain of cowed, occasionally goateed, 30-something white guy — that I so enjoyed the character who pulls a pack of baby wipes from his expensive rucksack cum diaper bag, disinfects his palms with one, then procures an empty Ziploc bag in which to dispose of the used wipe before shaking our protagonist’s hand? Is it because I have milled awkwardly under chilly, white-gray skies at a dozen small children’s mid-morning birthday parties north of University Avenue that details like the scone crumbs in one character’s beard or the cooler full of “microbrew [beer] whose label has a steampunk sensibility” made me snicker with delight?

That’s what I originally thought while reading this book, a sharply observed comedy of liberal manners that takes place entirely at a 4-year-old’s birthday party. After all, the Bay Area is pretty good at making fun of itself, and in Family, Genus, Species, Allardice — an Oakland native and Berkeley resident — peddles fairly standard comic fare. Moreover, at this point, we’re all pretty good at making jokes about the tragically homogenized world in which we live and raise our delicate children. So, I thought, the book must be registering as great because it resonates with my own experience. But as I read on, I came to see that Allardice’s deft novel is actually deceptively complex, layered not simply with satire, but with emotional revelations about family, community, sexuality, parenthood, race, and class.

Family, Genus, Species is an Odyssean journey contained to a North Berkeley backyard. Its central character is Vee, who just a week prior to the action of the novel, was Colleen. (She and her once-milquetoast boyfriend have changed their names to Vlad and Vee in the service of Vlad the Inhaler, the weed dispensary he’s trying to start in their West Oakland warehouse.)  Vee has come to the backyard for her nephew Charlie’s birthday party, hosted by her sister, Pam, and brother-in-law, Geoff, and attended by an assortment of fake-happy, fake-relaxed upper middle-class parents and their kids.

Vee is clearly an outsider. Though we learn little about the family she and Pam grew up in, we know she feels like the black sheep. She’s overweight, underemployed, and deeply cynical.

And by bringing her beloved 4-year-old nephew a gift, she has already broken the rules before even arriving. “‘Geoff and I made it clear . . . ’” Pam says. “‘No gifts. We want Charlie to understand that the real gifts are family, friends, and fellowship, not gross material possessions.’” (I chuckled here. This is a thing that a parent in Berkeley would definitely say, and with a straight, even solemn, face.)

Vee doesn’t give a fuck. But in order to deliver the wrapped gift — a dinosaur toy — to the birthday boy without her sister noticing, she’ll have to navigate nettlesome party guests, troublemaking children with names like Waylon clad in ironic, toddler-sized Metallica T-shirts, and the root vegetable-laden labyrinth that is the backyard. This — the vegetation — is where Allardice really shines.

Northern California flora is celebrated for its variety, abundance, and beauty. Here, the air is often potently perfumed. Brilliant wildflowers bloom forth from sidewalk cracks. Some grow on vines and entangle pleasantly with fences. Still other variations majestically carpet coastal bluffs. Things brown in the heat, then are pummeled by rain, but in spring the Headlands turn again what Rebecca Solnit called in Wanderlust a “riotous, exuberant green.” There’s also the pale palette of thick water storage plants, the muted mauves and grey-greens of sturdy, spiny succulents — now a staple of hipster homesteads — which thrive in this climate. And don’t even get me started on the produce. The California Department of Fish and Wildlife estimates that there are around 6,500 species, subspecies, and varieties of plants that “occur naturally in the state, and many of these are found nowhere else in the world.” All this to say this particular patch of earth is beloved for its extraordinary fecundity.

Part of the magic of Allardice’s book is that it takes this vegetation, this natural bounty, and makes of it something utterly foreign and inhospitable. In her sister’s massive yard, Vee is surrounded by “aggressive flora.” Vegetables, “unidentifiable tubers and stalks” are “terrorizing the yard.” Branches “claw at her.” She gets lost at plant intersections, a “cross-street of eggplant and cauliflower.” There are dizzying mazes of microgreens, plants with “mistletoe-sharp leaves,” and “bushes the size of discontinued Eastern European cars that smell oddly like massage oil.” Vee is alienated by the “Californian obsession with avocados,” their “tough, rivet-studded” skin giving way to an “awful interior . . . once you cut in, you feel like a Civil War doctor sawing into a gangrenous leg.” She wonders at “the secrets of the mystical gropings of the farmers-market frequenters . . . divining from bulbous things with squeezings and sniffings some significance inaccessible to everyone else.” As the action of the novel crescendos, the plant life becomes truly monstrous, pursuing Vee and, it sometimes seems, determined to thwart her.

The yard represents but one dimension of Vee’s disgust. In fact, her alienation from the vegetation is small potatoes compared with her larger beef with the Berkeley set. While the birthday party is happening, so too is a protest downtown — obviously led by Black Lives Matter activists, though the movement isn’t mentioned by name — and Vee listens in as the guests cluck nervously about the “protesters, thugs, whatever they are,” as one puts it. “It’s just the anger,” one female partygoer says, “It’s not helpful. I mean, Martin Luther King wasn’t angry. I mean, not that I met the guy, but he seemed really lovely.” “Vandalism, that’s all it is,” says Pam.

Utterly oblivious to their own casual racism, the guests continue throughout the novel to voice concerns that the protest will make its way to them. Still, they don’t know if it would be better to stay or leave. “If they’re at San Pablo and University, that means they have easy freeway access,” one parent worries aloud. “Driving home, we’ll all get caught. Do you want your kids to be sitting there, fish in a barrel, for the rioters?” The notion that the “rioters” are in fact protesting the senseless murder of children is entirely lost on them. Vee can’t take the absurdity, saying to Pam, “You’re just dying to drop a few n-bombs, aren’t you, sis?” Pam balks, reminding Vee that she “minored in conflict and peace studies,” and eventually exploding, “This is just — this is chaos! I have every right to be angry. I voted for Obama!” It’s an embarrassing display, one sadly familiar to many of us, and it further cements Vee’s distance from her sister.

Where Allardice falters is in the cacophonous final pages of the book, when the action devolves into chaos. Or, rather, the perceived chaos that has been encroaching but held at bay for most of the book finally crashes in on Pam and Geoff’s idyll. In a bewildering final act — that in fact encompasses the last third or so of the book — the boundaries between inside and out, peace and war, and, given the political backdrop, we must assume black and white, collapse entirely. The “controlled wild” of Pam and Geoff’s yard becomes the site of real calamity, and the book spirals out of control. It is, notably, Vee who is instrumental in bringing about the actualization of the partygoers’ fears. By the novel’s end, we are watching the paradisiacal urban farm literally burn to the ground.

I grew a bit lost, and a lot overwhelmed, in the surreal last pages of the book. Still, I admired Allardice’s commitment to forcing a mounting, dizzying uncertainty for the reader, effectively unhooking the narrative — previously a very funny but seemingly toothless send-up of holier-than-though parents — from reality. In his surprising and bizarre ending, Allardice yanks the reader around on an adventure that’s increasingly violent and scary, and feels completely nuts. It’s a testament to his clever, wise, supremely engaging writing that this reader was willing to go along for the ride. I closed the book as I opened it — oddly energized, entertained, and smiling slyly.