Beyond the Blurb – Daniel Green 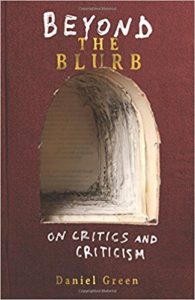 The novel is going to be good. Very big, huge. Staggering! You will positively scream when you see the pure girth of the throbbing novel. Its ruminations, meditations, and the scope of its breadth, oh, breathtakingly ambitious, like damn. Its plot is universal, despite itself, and unputdownable, and gripping. Jesus, the grip. The novel is on crushing isolation. Strangers and their strange lands. Solipsism in praxis, liminal nihilisms. You know Lacan? That. Family, The Lie. Masculinity, The Prison. Woman, and how she can be bad. Sad! The protagonist’s history of vices will be similar to the author’s, but there is a veil there, we swear, and it is thin, and probably mauve.

Big auction now for the big good book. This is about as heartracing as publishing gets, outside of PR catastrophes. Shallow pockets are scavenged, and out of some come major benjamins. The book will sell to the highest bidder of five houses. If the author is new, or can be touted as “new” (when her sordid self-published past is swept under the rug), a three-book contract is made up with a good pen, the one that writes zeroes.

The novel will not sell as much as it cost. But sometimes it will, and then nothing else matters.

In Daniel Green’s Beyond the Blurb: On Critics and Criticism, the author breaks modern literary criticism into three tidy pieces—“Critical Issues,” “Critical Failures,” and “Critical Successes.” He links criticism to the recent evolution of 20th century contemporary fiction, or what is traditionally known as a Great Novel. From there, we link the Great Novel to the state of the modern book publishing machine.

Is it merely a coincidence that when one goes through the weekend book review sections of the most prominent newspapers one finds the same books covered? Sometimes the critical verdict is positive, sometimes negative, but that this particular book — usually a work of conventional psychological realism and/or written by a “name” author — was deemed significant enough to warrant review in the first place is what counts . . . As much now as in 1974, new and experimental writers need not apply, unless the writer has the right pedigree (respected writing program, previous publication in eminent journals).

In his first section, Green illuminates the Critical Issues of literary criticism. I resonated with the key issue that there is too much content about too few books not only in criticism but also in commercial publishing.

According to the Association of American Publishers, publishers’ revenues were down in January 2016 compared to January 2015. Trade publishing had double-digit declines in adult books… and that’s not to mention how eBook sales tanked. If not for the Girl and her Train, Penguin would not have had such a robust 2015. The Big 5 rely on their Stephen Kings and their John Greens to scrape by each year. And using Green’s criticism on critics, we can deduce that book reviewing may be feeding and rotting inside of (eee) that dismal business model.

Reader, in my day to day life, I try to confront almost every conundrum with the question: can I blame this on James Wood and Jonathan Franzen?

“I’ve been laid off at work. Can I blame them?”

“My rude cat keeps pooping the bed. Please sir, can I blame them?”

The answer is often no, BUT NOT TODAY, SATAN! Lucky me, Daniel Green loves to blame a lot of things on J’s Wood & Franz. Put the kettle on for this spicy brew: “Criticism arises because some readers feel a need to talk about the reading experience, because works of literature do not explain themselves … Unless, of course, you are Jonathan Franzen, who believes that the work is a ‘contract’ with its readers whose terms are thoroughly spelled out. Presumably this sort of work requires no critics. Mostly, though, such a notion makes it clear why a writer like Franzen might not be worth reading in the first place.”

(Throughout his book, Green writes about critical successes and failures with the same objectiveness and near dispassioned quality that defines New Criticism. Except for these succulent digs which he doles out like dog treats, and for which I positively live.)

Additionally, Green claims that critics like James Wood (in most cases, JW seems synecdoche for the NYer) hedge out any possibility of coverage for something on the fringes. Experimental novels that function outside the framework of reality has been coined by Wood as “hysterical realism,” which is essentially as shady as cooing “Bless your heart” in Savannah, astride a veranda. Green’s accurate and insightful assessment of the prevalence of BIG BOOK reviews — of which Wood is a shining example—means that vital novels and necessary voices published by independent presses often have to fight to be heard amidst the din of Big 5 coverage. And many times it feels just like screaming into the blogular void.

The literary blogosphere has become largely an echo chamber for book business gossip, pseudo literary trivia, and the establishment perspective. … these blogs actively seek to be conduits of publishing propaganda (in the guise of “promoting books”). Once the book has passed its “sell by” date, nothing else is heard of it and every books is considered in isolation, as a piece of literary news competing for its 15 seconds.

In his section of Critical Failures, Green elucidates the issue of too-much-content-too-few-books, describing the trickle-down effect of an outdated and monocultured obsession with micro-marketing.

If I may remember to you some of the Big Name Novels from the last five years — The Goldfinch, City on Fire, Gone Girl, The Girl on the Train, The Girls, All the Light We Cannot See, we will see a familiar pattern: all had major news coverage, constantly, and budgets that could feed scores of liberally educated editorial assistants for the length of their publishing careers, twice over. In the eye of this media tornado, bookbuyers need to be exposed to a title over and over again, so that it burrows like an earwig into the part of the brain that pulses BUY. READ. LIKE. Once the New York Times covers the book, its influence trickles down to Influencers, to the book bloggers and Goodreads members and “little bigmouths” in the Young to Publishing Group. But then, even more repetition is needed to reach a non-book-buying audience. Oprah’s the only critic that matters. Obama’s got to #spon it. Reese Witherspoon needs to ‘gram it.

So . . . what changes can be made? How can we be better? This, Green suggests in the third and final section of the book, Critical Successes.

[S.D. Chrostowska and David Winter are] critics who show us, through the vitality of their criticism, how [the divide between academic and general interest criticism] needlessly separates resourceful and intelligent critics from a potentially receptive audience. Both of them point the way forward for literary criticism in the digital age, partly by using their criticism as an opportunity to reflect — and provoke reflection — on its own ultimate purposes.

Is that . . . a glint of optimism? Just when we thought criticism became for nobody but itself, a bustling petri dish of its own making, along come visionaries like Chrostowska. Her work, says Green, “is more sharply attuned to the changes evident in literature and literary culture, better situated to register the reshaping of literary writing in a networked world in which print has been supplanted by pixels.” By attending to the scaffolding of literature as it stands now, not as it stood in the era of peak Stephen King and pre-Borders collapse, Chrostowska works to abolish the old groupthink and monoculture that plagues Big Book. At last, a saint to crack open the incestuous, hegemonic tail-eater.

Hold up. Winter is coming.

Green points out that Winter accentuates the vitality of the review even while calling it “trivial,” which is difficult to grasp. Not meant as a slight!, insists Green, but in fact a word that may guide us to accepting a new Winterian approach, that is, “[attending] to the specificity of the reading experience itself, something academic criticism generally abjures.” Green claims that through Winter’s eyes, “Criticism can help us begin to fathom what we read, even if a good beginning is all we might really hope for.” Both Winter and Chrostowska offer a new way forward, or at the least the beginning of one, which takes pick and shovel to fallow ground.

In the equation of BIG literature = BIG criticism = BIG publishing, Green points out that “in the 20th century the novel became more or less synonymous with ‘literature’ for many readers. Literature is not whatever readers at a certain time declare it to be — not until some process of critical reflection […] leads them there.” Later, he writes, “if faith in Literature is to be replaced with trust in writing, criticism could have an even more important function in helping to reconcile confused readers to this real death of literature.” The sinking of the mighty Titanic would not have been as tragic, it follows, if its passengers had just reconciled themselves with their inevitable death and got on with it already.

As it urges us to pivot from traditional criticism, Beyond the Blurb refuses to hold our hand. Green chastises Literature for becoming odalisques to the odorous Christopher Hitchens, the anti-Semitic Richard Kostelanetz, the dickish Morris Dickstein. But Green’s Obi Wans, Chrostowska and Winter, don’t appear to provide much more than a precipitory stab at resistance and change. The way forward is unclear, but maybe the absence of a template is what will engender the greatest strides.

It takes someone from the inside, a Chrostowska or Winter, to break the similar circuit within book publishing, too. The divide between the top capos of Big 5 publishing and the assistants that execute their bidding is more vast and unscalable than ever before. The top clings to the bestsellers of years past, to churning out the next flawed Girl lit-thriller again and again and again ad nauseum, instead of taking a chance on new terrain. To do so would be too risky as publishing houses continue to downsize, to merge into the  combined Penguin Random S&Macmillcollins-Hachette that is surely waiting less than a decade down the line. As with book reviews, fringe voices will only be the beginning. They must ring louder, and clearer, and more frequently, to drown out the urge to keep doing as we’ve always done. Classic dystopias like those in 1984 and The Handmaid’s Tale may be cropping up in Amazon’s bestseller list again, but stories of resistance and rebellion can apply to more than our political climate. “Look for the helpers.” Here’s a hint: they’ll be in their cubes, working on your P&L.