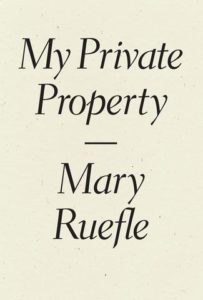 My first introduction to Mary Ruefle’s work was a stunning collection of lectures about poetry and writing titled Madness, Rack, and Honey, published by Wave Books. I remember, while reading the title piece, feeling a twin sensation in the sternum in front of the heart, and in the skull in front of the mind, when I — as we say — got it. This revelation was not simply comprehension, but felt like I had come to Ruefle’s ideas myself, like holding an idea’s breath underwater and the eyes-wide-gasp after coming up for air. Ruefle was that immersive and cogent.

I inhaled Ruefle’s new book of prose poems and essays, My Private Property, wanting to know what sensations these pieces would provide. I also wanted to know not just what I felt while reading, but why. I had a hunch that, if I paid attention to each piece’s voice, I might be able to articulate some of this why. Lectures center the argued idea, and they need a stable relationship between the voice and the speaker; an essay may center the tension between the argument and the arguer, and so they may destabilize voice and speaker; a prose poem may center anything at all, stables or no stables whatever. The voices in My Private Property — with essays, prose poems, and pieces in between — are often unstable without much tension, or stable yet quite tense. And this collection’s sensations are marvelous small hoof kicks all over.

One of My Private Property’s large concerns revolves around the fraught impulse to classify. The vertebrae that curve this book’s spine are Ruefle’s eleven “color pieces,” which are prose poems classifying different color “sadnesses”: blue sadness, purple sadness, etc. My favorite of these is “Gray”:

As I consider the actual gesture, I consider the voice that makes the gesture, and I consider that, perhaps, the piece’s real affective strength depends upon the tension held within that voice. On the one hand, the phrases “the most common of all,” “but not to be confused with,” “sad to say,” and the lack of the first person all suggest a voice that is removed, wry, and didactic. On the other hand, the relentless repetition and the s and a sounds create a rhythm that stills and instills me with arresting melancholy. I hear this tension in all the “color pieces,” suggesting the exhausting, futile, yet necessary work Ruefle does to describe and classify her condition. These eleven pieces reverberate throughout the whole of My Private Property.

Voice is a strange part of me. It gives language to what I experience, and experiences alongside me. Voice — in speech or in Ruefle’s case writing — also affects the very experience it tries to articulate. (If I were prone to using figurative language that simplifies complex science, I would now invoke Heisenberg’s Uncertainty Principle.) Let us say that voice is the felt part of writing. When I focus on how voice lives in a prose poem, I’m trying to focus on what sensations the speaker feels as the poem happens. If a poem connects with me and kicks me with its little hoof, I can dwell on how the voice itself feels to illuminate why I felt that kick.

When I read “Gray,” I felt like a piece of sadness I feel most days had thrummed through my chest and sat on Ruefle’s page, for a moment, like any old thing. Later, when I noticed the tension in the voice between its wry tone and melancholic rhythm, I understood more of my own feeling, and placed these words for it, here, just now.

Numerous other pieces in My Private Property play with the problems of classification, description, naming, and ultimately language. There is a piece called “The Woman Who Couldn’t Describe a Thing If She Could”; an under-emoted piece about whether to “over-emote” in a police statement; there’s a prose-poem personifying keys involving a man with “theories about keys”; an essay defining “ground,” “trash,” and “cemeteries,” which reads like Burials for Alien Dummies; a piece featuring a heroic fox as expert forensic analyst; a piece where the speaker knew the sublime was near and named it so, but “couldn’t look.”

The voices have a wry and humorous remove, which first seems like the book is a series of high-art jokes by an acclaimed writer who’s already done it all, dropping the proverbial mic because, as the Mr. Pacquette feels in “Take Frank,” she “felt sorry for the sad fate of literature, which should be able to save the world but can’t.” The accumulation of these pieces, however, reveals the “rack” underlying them, which Ruefle defines in “Madness, Rack, and Honey” as the “torment, pain, torture” that “poetry does to the world… poets do with words, and… words will do to a poet.” The book’s insistent attempts to use voice to take and hold onto an experience are a colorless, tormented sadness below the surface of this funny, colorful collection. Further, Ruefle’s self-reflexive awareness of the equally insistent failure to possess such experience feels climactic — or anti-climactic — in “Self-Criticism” toward the end of the book:

In a typical poem by myself, a woman is sitting alone doing absolutely nothing. She notices a fly crawling across the table and strikes up a conversation with him. Something terribly dramatic happens, and the poem ends. This happens day after day, as many days are there poems in a book, leaving her exhausted.

Repetition itself emerges as one of the few visible marks of life that Ruefle can stand upon “day after day.” As she observes in “The Invasive Thing,” we fill the “infinite emptiness” through “all our minute and repetitive actions, such as cleaning crumbs from a countertop.”

The longer pieces in the collection, though, clarify Ruefle’s concerns and voice so that the shorter ones can get away with their repetitious play. I want to dwell on the title piece, “My Private Property,” because it’s the longest but also the strongest. I love this piece. It’s about the art of shrinking human heads, practiced largely by Jivaroan peoples in Peru and Ecuador. “My Private Property” places the shrunken head on a table and looks at it from every angle: a literal, meticulously crafted material object; an art form; a historical, cultural artifact; a historical, cultural symbol; a personal symbol; a personal memory; an emblem of colonial plunder; an emblem of commodification; a daydream; an emblem of hope. The essay links our impulse to classify with our impulse to possess, and develops this link and synthesizes these angles in a remarkably striking way. Toward the end, after detailing her daydream in which she has twelve shrunken heads of those she loves in an egg carton, she confesses: “I am ashamed to think of the baby heads as my private property, but I do.” She then connects her personal greed for these heads with brutal, colonial greed:

Thus the King of Belgium declared a vast territory as his private property, and all the heads within it, including (unbeknownst to him) all the shrunken heads, heads shrunk after a week’s worth of artful work. . . . How can I call myself benevolent? I want, as my personal private property, twelve human heads.

This moment synthesizes so many of the angles Ruefle had independently developed in the essay, in a way that directly implicates Ruefle in the horrific consequences of colonialism, honors the art form of the shrunken head, while remaining committed to her personal longing for such a possession.

What truly sells me on this piece, however, is how the voice moves throughout. Instead of the fixed tension humming through the voices of the “color pieces,” the voice in “My Private Property” shifts. The first sentence flaunts the wry voice we’ve grown to know so well: “It is sad, is it not, that no one today displays any interest in the art of shrunken heads.” The voice — with its “is it not” presumptuousness — lets me in on Ruefle’s joke, for up until reading this piece, I have not had any interest in the art of shrunken heads. I’m on board with Ruefle from the get go because of this voice, so that, when Ruefle seriously and quite critically commits to interrogating her relationship to shrunken heads, it’s already too late — I’m with her. There are many shifts in voice throughout the piece, but the end reveals it all:

This is high-lyric mode straight out of Sappho: the second person direct address to the heads, the imperative anaphora of “comfort me,” the sweeping river imagery, the use of “pantheon,” and to top it all off, the use of “O”! I absolutely love it, precisely because the piece began so smugly. The transformation of voice flattens my arteries at the end — a full gallop at the ribs — because it shows how Ruefle herself (or at least her speaker) feels and has always felt since the beginning of the piece. At the same time, I think of this ending when I read “Self-Criticism”: “Something terribly dramatic happens, and the poem ends.” But I could read Ruefle day after day, and never get exhausted.