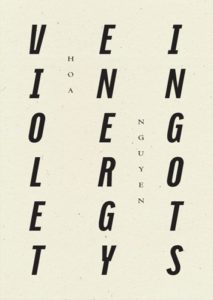 Hoa Nguyen’s newest collection, Violet Energy Ingots is a lesson in the poetics of disturbance. This is clear from the two epigraphs, both of which signal the poet’s concern with the moment when mundanity and language are frightened from stasis. One of Nguyen’s dedications is to Aphrodite, who is “deathless and of the spangled mind,” and another, an epigraph from Jack Spicer:

When shall I start to sing
A loud and idiotic song that makes
The heart rise frightened into poetry
Like birds disturbed?

From here on in, the reader encounters powerful women like Hatshepsut, The Furies, and Eve as well as domestic scenes of motherhood, composing a note to a friend, and the act of writing poetry. One could read this all in terms of a consciousness engaged with the metaphysical, the mundane, and language’s role in bridging these two worlds. Beyond this though, Nguyen makes it imperative that the reader find new capability in disturbance. For instance, see “Autumn 2012 Poem”:

so I can stop burning the pots

“Autumn 2012 Poem” familiarizes the reader with the eloquent disturbance Nguyen is after in the collection as a whole. In the world of this poem, light and time are used as a way of bridging the everyday and philosophical, but to what end? Why bother assigning language of capability and elasticity to these things that are fleeting? The speaker says, “so I can stop burning the pots,” which catches my eye. Why would the pots be burning in the first place? Perhaps due to neglect, forgetfulness, or distraction. Nguyen doesn’t address these concerns immediately; rather, her poem unwinds itself slowly. Later, the poem moves towards making this a discussion about language itself as the speaker remarks,

I was obsessed with
(not wanting to work with
ashes)

As the earlier stanza narrates forgetfulness, here we encounter the speaker performing an act of remembrance, though it is filtered through and obfuscated by the “she” buried in the sentence’s syntax. The speaker’s remembrance is disembodied, even in language. The speaker’s obsession or interest is stated blatantly, though set aside in parentheses, which visibly disrupt the idea further. “(not wanting to work with ashes)” itself looks like a remnant in its set-asideness. This idea is troubled even further by the phrase’s syntax; the speaker’s desire is in working with something complete, but this is said in terms of the speaker’s negative “not wanting” rather than affirmative “want.” The speaker then is dealing with mere remnants, ashes, and perhaps the world never presents itself as fully complete in the world of this poem. Throughout its body, verbs are curtailed before they are fully put on the page, and sometimes these verbs are corrected and the poem performs a dance of interruption and revision.

I walk   I wal—
I walks down sometimes
Why the advi—

Abide   the advice was

Not “Fair better”
but “Fail better”

The language of this poem stutters, unravels as the speaker carries out actions necessary to life. Rather than landing on “I walk” as the action for the speaker, the shift to “I walks” animates the “I” as an entity almost disembodied from the speaker. This makes me recall Anne Carson’s Eros the Bittersweet, in which she states, “The words we read and words we write never say exactly what we mean. The people we love are never just as we desire them. The two symbols never perfectly match. Eros is in between.” Though in Nguyen’s poem, we’re not dealing with lovers but rather the “I” as both body in motion and metaphysical seer in precarious balance.

In “Sonnet for Mir Mir’s Head,” Nguyen enacts another instance of fraught desire, though this time in much more overt language.

The poet sings a song in which the rhymes strain and stretch to find resonances with one another. The poem references Norse figure Mir Mir (the rememberer, the wise one), but while reading this poem, like many poems in the collection, I didn’t feel like I needed to understand the reference right away. Though I am interested in the myth, in which Mir Mir’s head spouts knowledge and counsel to the god Odin post-decapitation, I’m more interested in Desire as a state, sín remedio or, without remedy. In the context of this poem, desire lacks remedy because there is no object of desire to begin with. Without an object of desire to remedy understanding for the speaker or audience, or in other instances, the speaker existing in a state of not-want, Nguyen seems to suggest we look at the space in between her juxtapositions, examine what is in suspension post-disturbance.

In considering what composes Nguyen’s poetic disturbances, I find myself returning to the collection’s title and read these poems as a series of ingots. An ingot is a mass of metal cast into a shape easy for storage and further processing. An ingot is a kind of placeholder state of existence where precious material waits as a cash reserve, or to be made into something else. Nguyen’s poetics are not unlike gold bricks: dense, full of mundane matter (think irises, red candies, hands), gesturing towards the otherworldly (language itself, goddesses, hauntings, history) in a precarious balance, formed by a process of delicate alchemy. An excerpt from “Haunted Sonnet”:

You pronounce Erinyes as “Air-n-ease
Alecto: the angry     Megara: the grudging

Tisiphone: the avenger (voice of revenge)
“Women guardians of the natural order”

“Haunt lonely” sounds like an imperative when followed by “and find when you lose your shadow.” I wonder if all hauntings are lonely, and what it means to concretely find something as already fleeting and illusory as a shadow. The poem hinges on a slight reinterpretation of the Oresteia in which, after the matricide of Clytemnestra by Orestes, the Erinyes (The Furies) follow Orestes demanding blood vengeance even though Apollo commanded the murder in the first place. Nguyen gives the address, “Your job is/to rescue the not-dead woman before she enters/the incinerating garbage chute,” and here I feel implicated as a reader by the use of second person, but also interested in what it means to be “not-dead.” I think this phrasing means to suggest that the woman, a Clytemnestra figure is not quite alive, perhaps near death, and perhaps it’s not too late and she can still be saved. The woman “Forever a fought doll” asks “What do you know about Vietnam?” to which the poet answers: “Violet energy ingots       Tenuous knowing moment.” This poem, like many of the poems in the book, negotiates the autobiographical (Nguyen was born outside Saigon, grew up in Washington, D.C. and currently lives in Toronto), historical, metaphysical and the mythic all at once. Nguyen’s poetics are such tenuous knowing moments: disparate genres and materials are drawn together and distilled in each poem — distilled but also activated and bright, ingot-like.

“To Seek” has some of my favorite lines in the entire collection, beginning with “To seek too much/attention etc./To be careful and mouth all the words/My glories are morning and purple.” We listen to Marvin Gaye alongside the speaker in one moment, and witness her forgetting why she was crying in the next before moving through fragments describing the fabrics she wears, and her consideration of making dinner while interrogating language:

This poem’s ending more bluntly expresses the underpinnings to Nguyen’s poetic movements, all the stutters, parentheticals, homophones, strained slant rhyme, impossible desires, etc., made throughout the book. More than this though, the poem expresses a frustration with the fear of getting words wrong as we mouth along to the existing impressions of language. Sometimes language feels too worn, “scored,” and used up. And this is why Nguyen is interested in the roots, the parts of things, their underpinnings so that she may disrupt language.