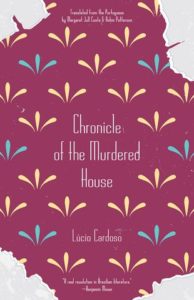 “Go to the crossroads, bow down to the people, kiss the earth, because you have sinned before it as well, and say aloud to the whole world: ‘I am a murderer!’”

The murdered house of Brazilian Lúcio Cardoso’s gothic novel is the Charcara dos Menezes, the country home of the locally prominent Meneses family. Each of the seven deadly sins (and more, besides) thrives within the Chacara’s time scarred walls. However, it is not the Meneses’ immorality, per se, that destroys the house and the proud legacy that it symbolizes, but instead the family’s arrogant certainty of their rightness and their obstinate refusal to embrace the humility necessary to redeem themselves.

The Charcara is home to the three grown sons of the late Dona Malvina Meneses — Demétrio, Valdo, and the recluse, Timóteo. Demétrio, the eldest, manages what little remains of the family’s fortune alongside his wife Ana with whom he shares a passionless marriage (an altogether predictable state of affairs given that Demétrio hand-picked Ana as his future wife when she was only a toddler, in much the same way you might select an unripe banana from the bunch knowing that one day it will suffice as a serviceable, if boring, snack). In contrast to the bland Ana, Valdo’s young wife, Nina, is a vibrant beauty who owns a hyperactive, romantic imagination and adores fancy things, much to the ridicule of penny-pinching Demétrio. It is principally Nina’s (and the Charcara’s) story that Cardoso unspools in a drama involving extramarital affairs, incest, unrequited passions, and revenge; a heavy mix that is leavened at times with touches of melodrama that are a credit to the author’s droll sense of humor.

Chronicle of the Murdered House opens with Nina’s wake as recounted by André, Nina and Valdo’s adult son. André has had no life experience beyond the cloistered grounds of the Charcara. As he recalls various periods of his solitary life we learn that Nina abandoned him in infancy. When she returned to the Charcara fifteen years later to resume her role as wife and mother, innocent André found himself overwhelmed by Nina’s beauty and volatile, passionate nature. Nina allows her affection for André to cross the line from maternal to romantic in an attempt to relive her past, specifically her illicit affair with the Charcara’s gardener, Alberto, all those years ago when she first moved into the Charcara as Valdo’s new wife. These affairs, first with Alberto and then many years later with her own son, bring about startling and enduring repercussions for the entire Meneses family.

The Meneses’ haughty attitude toward outsiders discourages interactions between the family and the locals. Father Justino, the village priest, is the rare visitor to the Charcara, and he has a theory for why evil pervades the household:

“I wondered what made this house so cold, so soulless. And it was then that I discovered the formidable immutability of its walls, the frozen tranquility of its inhabitants. . . . there is nothing more diabolical than certainty.”

For Father Justino, the Meneses’ Godlessness is not a result of their sins, but their self-assured rigidity that cuts-off any willingness to be vulnerable to the chaos of experiencing pain and fear and to change from it. Only through personal redemption, the renewal that comes about through change, will the Meneses’ find proof of God’s grace. Cardoso makes this absence of grace manifest in the physical decay of the Charcara and more profoundly Nina, whose diseased body putrefies in the weeks preceding her death:

Emanating from her, from that whole dying, sweating, trembling creature, came the same strong, warm, unbearable smell . . . She lay limp in my arms, gasping for breath. And down my fists and my fingers ran a liquid which was neither blood nor pus, but a thick, hot substance that dripped down as far as my elbows and gave off a foul, unbearable smell.

Nina’s body has absorbed the stagnant swill that is all that remains of the family’s souls. The body of Timóteo, the third Meneses son, also illustrates this spiritual rot albeit in a different way. Timóteo’s morbid obesity and garish crossdressing turn the family’s exalted sense of itself and vain propriety inside out when he emerges from the room where he has secluded himself for years and humiliates his brothers before the crowd gathered at the Charcara for Nina’s wake:

He was not just fat, he was enormous, . . . He could scarcely move his round, flabby arms, which hung in mountainous folds, drooping lifelessly like the branches of a tree severed from its trunk. It was difficult even to make out his eyes in that mass of human dissipation and sloth: his fat, puffy cheeks formed a mask so exotic and terrifying that he looked more like a dead Buddha than a living creature still capable of speech.

He wore something that could not be called a dress exactly, but which had once been some sort of ball gown — goodness knows when or where — and which was now a faded mauve thing of shreds and patches, all ripped and hastily sewn back together. His wrists and neck were thickly circled with bracelets and necklaces — I had no idea where these had come from, but they were evidently the family jewels . . .

First published in Brazil in 1959, Cardoso’s novel bears the markings of some earlier classics. William Faulkner’s Absalom Absalom and Thomas Mann’s Buddenbrooks come to mind for their gothic atmosphere and plots involving family dynasties slowly sliding to destruction. It also possesses an unmistakable affinity with Crime and Punishment’s self-righteous protagonist and explicit preoccupation with spiritual redemption. Putting these comparisons aside, Chronicle of the Murdered House earns pride of place as a classic of world literature because it is a complete novel: fully realized characters, expressive writing, an exciting, finely plotted story, and enduring reflections on the human condition. Publisher Open Letter and translators Margaret Jull Costa and Robin Patterson (as well as Benjamin Moser who penned the volume’s poignant introduction) deserve our praise and thanks for recognizing the greatness of this novel and bringing it to life for English language readers.

Lori Feathers is a freelance book critic, 2017 Best Translated Book Award Judge, and an Assistant Managing Editor of Asymptote Journal. She can be found @LoriFeathers.