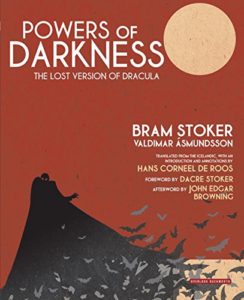 Powers of Darkness: The Lost Version of Dracula has a complicated and fascinating history. The novel is the English translation by Hans Corneel de Roos of Makt Myrkranna, an Icelandic translation by Valdimar Ásmundsson of Bram Stoker’s Dracula. Makt Myrkranna, as de Roos discovered, is an entirely different novel from the work that has inspired more than a century of gothic and supernatural fiction.

There are, however, three books under discussion here: Dracula (itself a composite of editions, not to mention indelibly touched by the many revisions and adaptations that have permeated modern culture, from Bela Lugosi’s portrayal to Anne Rice’s novels to a cameo in Buffy the Vampire Slayer); Powers of Darkness, Hans Corneel de Roos’s translation; and Makt Myrkranna, Valdimar Ásmundsson’s “original” work, present only as a kind of a shadow form in the margins and annotations. De Roos’s annotations are often as revealing as the text itself, momentarily exposing the work of translation in explanation and defense.

So the question becomes: how is this book to be judged? As primary text? As translation? Whose translation? Valdimar’s, or de Roos’s? As fiction? On its own merits, or borrowed ones, or by comparison?

Judged as a work of fiction, Powers of Darkness is not good. This is largely due to the choices made by Valdimar Ásmundsson in expanding Jonathan Harker’s journal into roughly two-thirds of the novel while drastically minimizing what English readers recognize as the main body of Stoker’s work. The bulk of Powers of Darkness follows Jonathan Harker as he stumbles around the Count’s Transylvanian castle, gets seduced by a gorgeous blonde vampire who is either the Count’s sister, niece, or wife, spends far too much time listening to the Count talk about his collection of pornographic etchings, and still manages to discover the Count’s admittedly poorly-hidden devil-worshipping human-sacrifice cult in the basement. The last eighty or so pages of the novel consist of what makes up the bulk of Stoker’s novel, rendering the adventures of Mina Murray and company into hasty summaries. There is, in addition, an interesting albeit completely undeveloped subplot about the group of European nobles the Count has brought with him and their apparent attempts to foment a kind of people’s revolution in London.

Valdimar’s novel trades the honest, if overwrought, tragedy of Lucy Westenra’s murder for the more gleefully gory scenes of devil worship in the Count’s castle, and reduces Mina (here called Wilma) Harker’s role from narrator and amanuensis to side character and dream vision. A compelling, if simplistic, reading of Dracula is the triumph of technology over superstition and magic; in this reading, Mina is as much a hero of the story as any of the men when her skillful use of the typewriter to transcribe recordings and diaries enables the group to track down and destroy the Count. This characterization and agency is entirely purged from Powers of Darkness and, presumably, Makt Myrkranna: the character of Wilma Harker seems to do little more than appear as an avatar of purity and goodness for Jonathan Harker in his darkest hours, and faint at inopportune times in the rest of the narrative.

The boneless quality of Powers of Darkness is also, unfortunately, partly due to de Roos’s otherwise laudable efforts at maintaining the artistry of Valdimar’s initial translation. The Icelandic tradition of alliteration and its subtler cousin consonance do not translate well into English. Yet it is in its failures that Powers of Darkness is most interesting: this project exposes the risks of translating works from literary traditions markedly different from most Anglophone ones. In English, alliteration is often the purview of children’s rhyme and maybe certain kinds of experimental poetry, to be used sparingly elsewhere, if at all. To many readers, too much alliteration seems puerile, and most alliteration qualifies as too much. Thus, de Roos’s rendition of one of the most famous lines of Stoker’s novel elicits not chills, but giggles: “Hear, hear . . . the children of the night – what tuneful tones!” We can perhaps imagine Bela Lugosi intoning these lines in a suitably serious baritone, but it’s a stretch.

Makt Myrkranna is not precisely a translation of Dracula; or at least, it’s not what could be termed a good translation of Dracula. Obviously this statement requires some unpacking: when I say that Makt Myrkranna is not a translation, that is because it contains significant material that did not appear in Stoker’s novel, making it, if anything, a translingual revision. Powers of Darkness is a delight, but possibly only to the kind of person, like this reader, who is tickled by de Roos’s efforts in putting together the floor plans of Castle Dracula based solely on Harker’s admittedly confused narration. Too much of the introduction is spent on comparing the lives of Valdimar and Bram Stoker in what ultimately seems like a misguided attempt to prove that despite the lack of historical evidence, the two men could have met. This translation is a commendable and worthwhile effort that will likely only be of interest to Stoker scholars, a very few obsessive fans of Dracula, and those of us who find the work of translation absolutely fascinating.