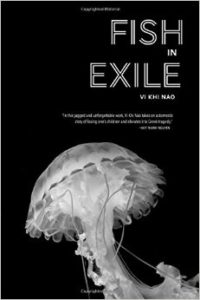 Before reading Fish in Exile, I had never read a book that reminded me of Anne Carson, a writer many people have deemed inimitable. Like Carson, Vi Khi Nao has a history of mixing poetry and prose, realism and unrealism. And in this book, her first novel, she also draws on the ancient Greek stories and concepts that Carson makes such frequent use of.

For the length of the first chapter I relished this connection as though I were the only one to have drawn it. Then I reached page 71, on which a new character announces that “Anne Carson and I are secretly in competition. You know, she and I are both classics professors.”

The character in question is Charleen, the mother and mother-in-law, respectively, of the story’s protagonists, Ethos and Catholic. In Greek, as Charleen might tell us, ethos means something like character. Catholic means something like “throughout-the-whole,” in the words of the scholar Walter Ong, who uses the metaphor of yeast — which acts on all the dough but “does not convert all the dough into yeast” — to demonstrate what he means.

By marrying these names, Nao sets up an exploration of the interplay between that which distinguishes people from one another and that which acts upon all, suffusing but not subsuming. As her metaphors — which are more than metaphors — she uses not dough and yeast but bodies and water. Water makes up approximately 73 percent of our brains and hearts and 31 percent of our bones, but does not convert us into it.

The book begins in the wateriest room of the house, with Ethos staring into the toilet bowl, grieving over a tragedy about which details emerge slowly. Ethos and Catholic’s two children, Abby and Colin, have disappeared into the ocean on a family trip to the beach, leaving the adults to deal with the aftermath. In addition to the children’s grandmother and bereft parents, the survivors include the neighbors, Lidia and Callisto, who were there that day.

Like the fish out of water the title calls to mind, they suddenly find themselves outside the flow of life as it seems life should be. But unlike a flapping animal who might reach water again, they can never return to the way things were. And yet they don’t die. “My death must be inevitably delayed (yet again!),” Ethos thinks one morning. Hence the exile. How does one live in these unlivable conditions? How does one bear a separation that is both unbearable and permanent? are the questions they, and Nao, face.

Of course the answers are different for different people, a problem for which Nao’s formal solution is to write from multiple characters’ perspectives. Catholic, Charleen, and Ethos each narrate sections named after them and, in the case of the latter two, one additional chapter each (“Garlic” and “Aquarium”).  Removed from the action, Lidia and Callisto don’t speak to the reader directly in their chapter, but through a journalist who interviews them about the children’s disappearance.

The book opens in the voice of Ethos, who used to be a middle school principal but now wanders around the house and sometimes the neighborhood, cooking, cleaning, and building an aquarium out of materials he buys from a local window supplier. The school calls, asking him to come back, but for a long time he ignores them.

Catholic continues working but behaves erratically, making cryptic comments and sewing outfits for the pet fish they keep buying, which keep dying, perhaps because she dresses them and leashes them and takes them on “walks” to the ocean. There, she and Ethos sift water with large containers in a futile attempt to find their children. “You can’t yank the sea up like a bedsheet,” Ethos tells her. To which she responds, “Watch me.”

“I am behaving so strangely,” she says in the book’s final section, the one written in her voice. “I know this. I know I can’t turn a dress or a fish into a little girl, but my heart itches.”

The strangeness of feeling trapped inside yourself while also being able to look at yourself from the outside while also remaining somewhat inaccessible to yourself — you can’t scratch your heart, let alone understand it — is heightened by Nao’s narrative technique. She alternates first-person narration with theatrical dialogue, flicking the reader back and forth between inhabiting the narrator’s mind and looking at them from the outside. (Reminiscent of movies, these shifts give the book a cinematic feel.) For example:

ETHOS: Catholic. Where do you want to be? In bed? I can take you there.

With my arms underneath her legs and torso and her right hand around my neck, I lift Catholic into the bathroom.

The transformation of objects into sentient beings (and vice versa) is a hallmark of Nao’s work. In her last book, the poetry collection The Old Philosopher, cigarettes lying side by side in a carton are figured as a family. (“God pulls my grandmother / Out of her cigarette bed. / … Lights my grandmother’s head up.”) And her prose collection Oh God, Your Babies Are So Delicious! contains a story that imagines a woman’s face as real estate in which others might invest. “Buyers take pride in showcasing their new home or architectural space to others,” the story goes. “It is like adopting an African boy from Zimbabwe. Look at my new exotic accumulation of expensive stuffs.”

If these lines are straightforwardly critical of the ways people objectify others, the subject-object conflation in Fish in Exile is more complicated, and often enacted by characters upon themselves. In the opening toilet bowl scene, for example, Ethos notices that the water “hasn’t completely dissolved the macerated toilet paper. At the bottom, a puff of cloud suspended. . . . I keep staring at it as if it were my life: suspended between the ether of this world and sewage . . .  Oh, I wish she had the courage to flush me down.” The quick, quiet shift from gazing-at to completely-identifying-with mirrors Nao’s swerves between a bird’s-eye view of her characters and those characters’ own perspectives.

Even more than the classical allusions, these shifts recall Carson’s work to the extent that they are propelled by changes in form. In collections like Plainwater and Decreation, Carson’s mini-lectures stand side by side with her poems, and poem-like screenplays rub up against essays. More formally consistent, her novel-in-verse Autobiography of Red is nonetheless bookended by an introductory essay and closing interview. Fish in Exile combines these approaches: It shapeshifts as frequently as the collections do but makes its varied forms into a single book-length whole (which also happens to include an interview).

This structure reflects, and deepens the reader’s understanding of, the characters’ predicament. They are confined to the separate physical forms that are necessary to their existence, but together they create a larger social arrangement. And it is this proximity that lends so much meaning to the gaps between their bodies and perspectives.

Ethos repeatedly asks whether it is better to be in exile at home or at home in exile. Fish in Exile implies that this formulation is perhaps beside the point, that as long as he remains intact he will be in exile — suspended from everything else, and most painfully from the people he is closest to.

His grief over losing his children, and to some extent his now-distant wife, is in Nao’s hands a more intense, more tragic version of the pain that comes with the “corporeal bondage” of individuation; with having a body — and giving birth to children with bodies — that can never be fully dissolved into others. Just as Ethos eats Catholic’s placenta one night, “trying to stuff Colin back into my mouth,” Charleen reflects (thinking of incest) that “it must be an ancient maternal yearning: to create something that will reenter you again, even if it’s just a temporary arrangement.”

She solves her longing for Ethos, to the extent that she can, not by sleeping with him but turning her attention toward Cain and Abel. (They “both had to fuck their mother . . . They didn’t have a choice.”) Old stories, she thinks, have been her salvation. “You know, the classics have saved me,” she says to Ethos. “Reading them, you feel that your soul divides less and less . . . It’s really beautiful, what the ancients left us. A container. Filled with remedies.”

But if “language is what eases the pain of living with other people,” as Carson writes in Plainwater, her own water-filled book, “language is what makes the wounds come open again.” Catholic at one point asks Ethos, “Must you stand there and bifurcate me with your words?”

So Nao gives her characters other means of catharsis. One is water, whose power Ethos and Catholic finally stop trying to deny and contain. In the end, the homemade aquarium breaks down, pouring out its contents. A hallucinatory scene unfolds in the flooded basement and, for Catholic, “The great certainty comes: My children are no longer with me. They are gone. . . I must let go.”

The other is sex, in which they find an attainable release, one that does not dissolve their difference but passes directly through it. On the damp basement floor, they end their book-length dry spell. And despite having had her tubes tied, Catholic immediately senses that “some life-form is birthing within me.” Unlivable conditions, Nao suggests, do not extinguish life but certify that it exists.

Megan Marz is a writer and editor living in Chicago.