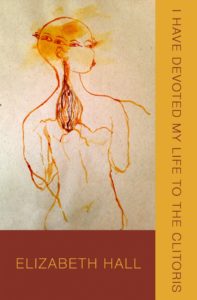 In her concise, evocative, and moving extended essay I Have Devoted My Life to The Clitoris, Elizabeth Hall considers the clitoris as a phenomenon, a unique detail that represents the numinous something that escapes — but demands — description: orgasm. Clocking in at an appropriate 69 pages including bibliography and acknowledgements and written in bullet-points divided into short, thematic chapters, the mimetic form of this essay proves Hall’s devotion to her object of study: the clitoris. That is, this slim volume unfolds in discrete, clitoral passages that, with a little time and attention, become more than themselves.

Hall’s extensive research includes close-readings of medical discourse from the sixth century to the present, revealing the irrational, phobic bases for much of the supposedly rational, scientific discourse on the clitoris, and from there, female sexuality and sexuality in general. Her bullet-points are written as simple, sometimes lyrical mini-paragraphs, that turn from regressive medical discourse and treatment of intersexed infants, to suggestive work of writers including Anaïs Nin and D. H. Lawrence, to pornography with titles like Squirt Queens, to her relationship with her own clit, body, and partners. In interspersing glancing analyses of these kinds of disparate cultural artifacts, Hall can evoke in her reader’s mind questions about many things including: the limits and potentials of language, the indeterminacy and implications of sexual difference, and the culturally relative, socially constructed and situated nature of science and ethics. But, Hall does this without the esoteric, overly-academic tone usually associated with these topics. As she says of nineteenth-century sexologist Richard von Krafft-Ebing:

While describing the many erogenous zones in the female, including the nipples, he wrote, “the erogenous zones in the women are, while she is a virgin, the clitoris, and after defloration, the vagina and cervix uteri.” It seems Krafft-Ebbing also dreamed of a single, exquisite fuck potent enough not only to rearrange the furniture of a woman’s brain or, say, the way the sun slants on her window sill, but a fuck so intoxicating as to irrevocably alter the actual way her body functions, interprets pleasure—that is, nothing short of a total revolution. And for some it is. They fuck and feel as if they’ve touched upon some elemental truth about humanity.

From critique of misogynistic nineteenth-century medical discourse, to implicit critique of a simplistic notion of revolution based on false universals, to an acknowledgement of what the shared experience of orgasm might mean for real people alive today.

Throughout, the reader is rendered part sleuth, part philosopher, and part masturbator by the bulleted form that reminded me of my experience reading English translations of Antonio Gramsci’s prison notebooks, though with a(n obvious) difference. Still, like Gramsci’s notebooks, Hall’s essay is divided into brief annotations on the work of other writers, and these interspersed with her own subtle, sparse reflections and commentary, lest the reader forget she is reading delightfully subjective, constructed narratives. Hall’s commentary is at turns personal, philosophical, philological, and political, always returning to, and proudly naming, the book’s particular focus: the clitoris. Given its form, reading Hall’s essay becomes like coming: dependent on and different for each reader, mindful, mindless, emotional, and physical. As Hall herself puts regarding a dirty little letter written between Nora and James Joyce: “I, too, wish I could lick letters and read them that way. The brain does jizz after all.”

After all, it’s a book about fucking, and coming. It’s fun to read.

On a more personal note, I’d like to add: I am a married mother of two children, the daughter of two PhDs in feminist theory — I have had sex, and orgasms, granted, mainly with cis men, but have always considered myself to be fundamentally in touch with my sexuality. Except that, while reading Hall’s I Have Devoted My Life to The Clitoris I realized, I wasn’t. Not really. As Hall herself says: “I was not born knowing that my body was worth honoring. I had to stumble upon it slowly, stupidly. In a book.” In fact, by reading the subtly juxtaposed information I already knew, or should have known, or that my mother knows but I don’t, in Hall’s unique, subjective essay, I realized, for myself, that I’ve still internalized loads of the regressive, supposedly rational medical and social discourse and was successfully “managing” my own “monstrous” femininity, to borrow Jane M. Ussher’s useful formulation. And so are privileged women around me. Since, as Hall describes in her chapter “Female Genital Operations,” “female genital operations are declining everywhere except wealthy, Western countries where the desire for a ‘designer vagina’ is spreading . . .  In interviews women seeking Labiaplasty most commonly cited a desire for a more aesthetic vulva — one that was ‘compact,’ ‘flat,’ ‘tucked in.’ No one part out of place.”

In the context of examples of that kind of internalized social and physical control, I started to realize why it would matter to say and write and touch the clit, my own or otherwise. Because, in fact, the clitoris is far from “monstrous,” it’s unique in human anatomy (as I learned, thanks to Hall’s critical annotation of Johnson and Master’s The Human Sexual Response(1966)). The clitoris is a detail, as Hall notes, “eccentric, irrational, decadent, prosaic… in firm opposition to… the universal, general, or essential.” And I mean that in the best kind of negatively dialectical sense.

And it is because of the possibility for these kinds liberating multiple meanings and readings that I recommend I Have Devoted My Life to The Clitoris to pretty much everyone who has, or has sex with, people who have, or have had, or may in the future have, clitorises, and those who don’t. As Hall puts it: “The lesson of the clitoris differs from person to person.” But Hall’s isn’t merely a relativist argument. Rather, as I began to think: it may be by the clit that we will be coming, together.