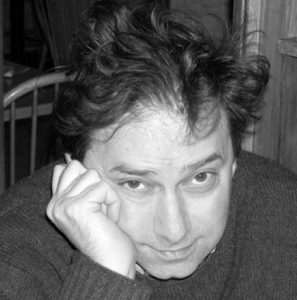 Ben Katchor’s strip “Julius Knipl, Real Estate Photographer” describes a shadow New York. The strip’s hero studies an old city that is ever fading before his eyes. In one strip, he thinks about the unseen elevator operators who “peer into the dismal void that lies at the heart of most buildings.” The Theater District employs people to keep their eyes out for blown lights on electric signs. Knipl notices odd connections between the city’s visual stimuli. The polish on doorknobs and doctor’s plaques are similar to the shine he sees on taxi drivers’ pants, bald heads, and subway banisters.

Katchor’s strip is part of the rhapsodic tradition of Jewish humor. He names S.J. Perelman, Sholem Aleichem, Saul Bellow, and Franz Kafka as influences. I assumed, given his strip’s yearnings for a dream New York that hearkened back to the first half of the twentieth century, a similar affinity to Winsor McCay. No. “‘Little Nemo’ was too spectacular and light-operatic in imagery for me,” he says. “I was rarely inspired by comic-strips.” He looked to Poussin, Rembrandt, and Hogarth.

Katchor has had a long a prolific career. Hand-Drying in America collects his exuberant oddball visions of urban planning which originally appeared in Metropolis magazine. The Cardboard Valise described a fictional island made up of fictional ethnicities. He’s written one graphic novel, The Jew of New York, and he’s collaborated with Mark Mulcahy on musicals. In 2000, Katchor became the first comics artist to receive a MacArthur Genius Grant.

The first collection of “Julius Knipl” strips, Cheap Novelties: The Pleasures of Urban Decay, was published by Penguin in 1991. Drawn and Quarterly republished the collection this year in a handsome new edition. Katchor answered questions by email.

Paul Morton: In the couple of decades since you wrote the strips in this collection, Times Square is no longer sleazy, Manhattan is bland, and lower middle-class ethnic enclaves have become richer and whiter. There are still touches of New York’s curious past to be seen for those with an eye attuned to history. What kind of artist do you think you would have been if you were starting out today?

Ben Katchor: That’s too horrible a prospect to consider. I’d have to imagine being born into a strange family 40 years later in history. It would be much easier to imagine being born in the Warsaw ghetto during World War II. I’m very conscious of being a product of my time, a certain economy, a certain world of publishing, music and film, certain political ideas, particular food and so on. I was once teaching in a college that I had briefly attended as a young man and each time I walked into the building, I was transported in my mind back to being an undergraduate, not knowing what to do in terms of pictures and stories. By some miracle, I figured something out, but starting out again, today, chances are that contemporary influences would not coalesce in a meaningful way and I’d be a frustrated, failed artist or a desperately unhappy businessman. 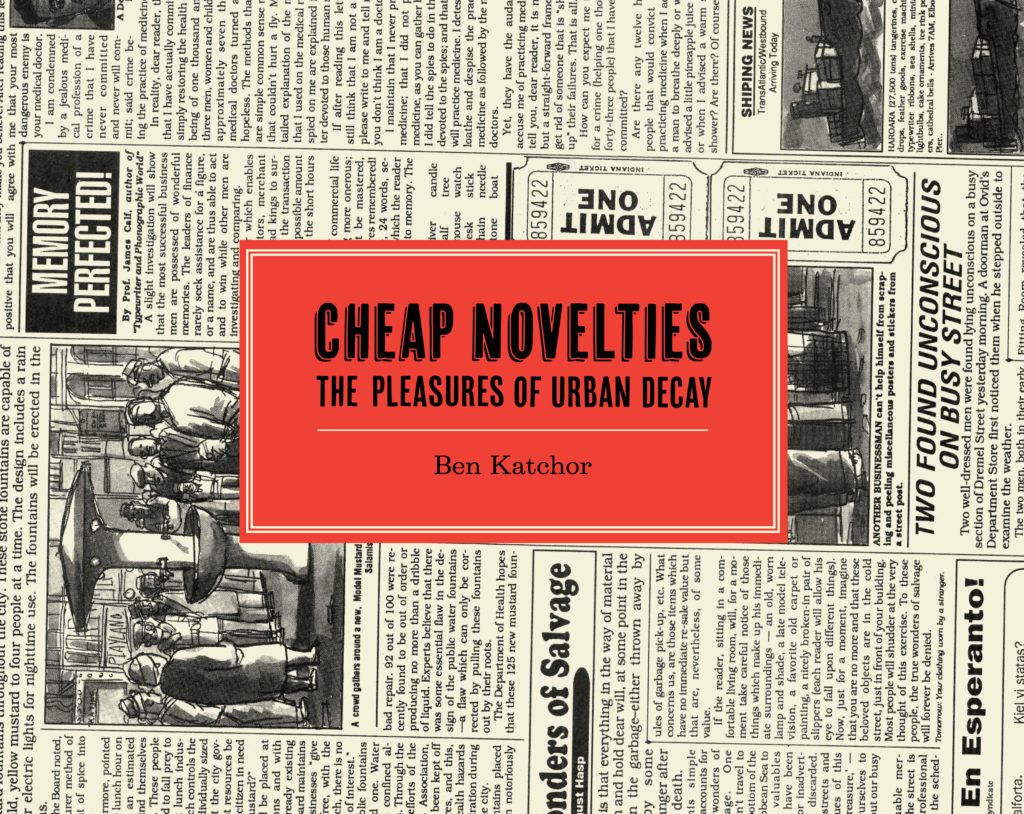 I can roughly define the New York you are searching for as existing sometime between the 1890s and the 1950s. How much did that New York still exist in the early 1990s? How much does it exist today?

The Knipl strips were my attempt to record and analyze particular aspects of an imaginary city that existed in the years just before I was born.  So, it was gone and had to be reconstructed as I started drawing the strip in 1988. Remnants of light-industry, lecture halls, the scent of unidentifiable ethnic foods—the whole city hinged on impossibly complex commercial relationships. Things of this sort still exist in forgotten corners of the urban world, but my subject matter was constructed from vague childhood memories.

It has been pointed out, particularly in regards to the problems which faced the planning and construction of the Freedom Tower, that it is nearly impossible for ambitious architects to still do great work in New York. How much, if at all, is your work influenced by the current economic climate facing architects? I’m not just asking about the strips collected in Hand-Drying in America and Other Stories, which themselves appeared in Metropolis, an architecture magazine. I’m asking about your entire oeuvre, including “Julius Knipl, Real Estate Photographer.”

As most of their work is in repurposing and renovating buildings for optimistic, lucrative renewal, many of my strips are about movement in the opposite direction. Imagining a city in a wonderful state of neglect and low rents.

In the Knipl strips I tried to imagine myself as a tourist in an imaginary city with surprises around every corner. It’s what I enjoy about cities. In his job as a real-estate photographer, Knipl is too busy to enjoy himself—the pleasures are just for the reader and narrator. 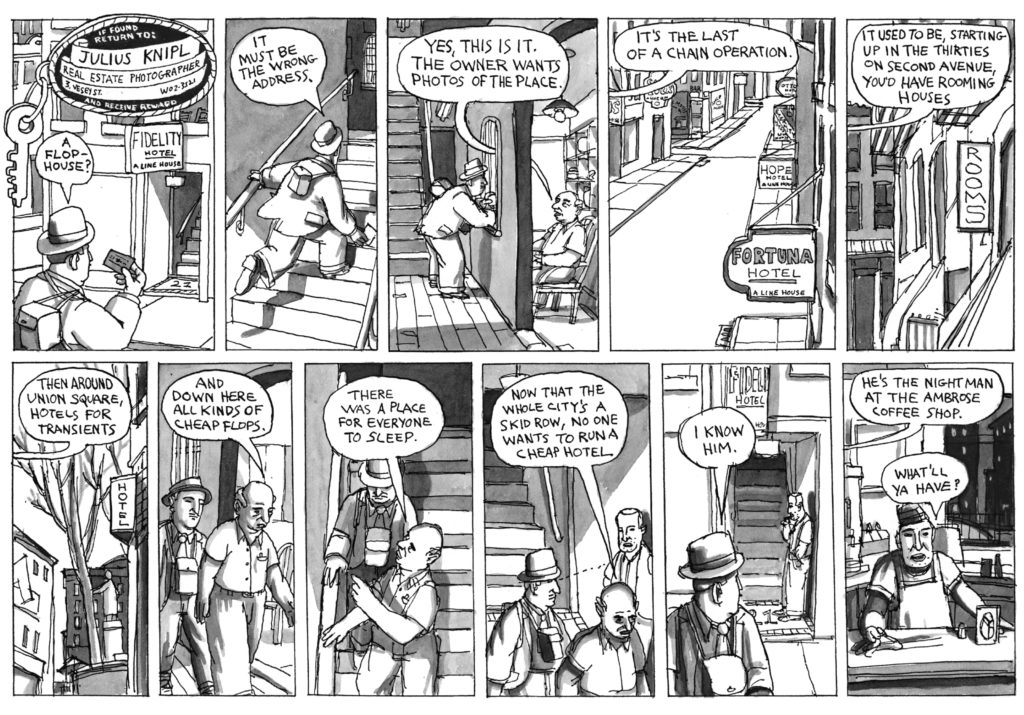 Your strip does not depict a multicultural city. There are no black people or Asians. I can’t remember any run-ins with any gay subcultures. Why?

I’m not a journalist or sociologist reporting on the demographics of a particular city, but the strip on page 7 involves a Chinese live-fish market, page 8 a Jewish shoychet; page 23 a second-generation French corset-maker; page 31 a fake Peruvian hot-sauce business; page 41 a black clerk; page 50 an unidentified foreign nation; page 58 an unidentified ethnic musician and page 108 a black curb painter. In the first two years of Knipl, my dream scenarios involved the desperate business schemes of white men of European ancestry, maybe some Jews, but even that’s rarely specified. In my dreams, black people, Puerto Ricans and Asians were not implicated in the semi-criminal activities of the economy—nor were women. These stories were constructed in a state of honest semi-sleep and are thus free of tokenism and the celebration of national and racial identity. Human romances are primarily with inanimate objects. Multiculturalism and cultural relativity were the subjects of my next strip, “The Cardboard Valise.”  I preferred to invent my own ethnicities, sexual appetites and cultures—-things not yet seen in this world—so as to avoid being accused of failing to adequately represent all the under represented ethnicities and cultures of the world.

You say you aren’t a journalist or a sociologist, but your work, like most comic strips until the era of the Internet, did originally run alongside journalism. In what ways did “Julius Knipl” complement the articles in The Forward?

The strip was a dream commentary on the waking-life content of the newspaper it appeared in. Journalists are constrained by some version of objective truth or the editorial agenda of the newspaper.

“Julius Knipl, Real Estate Photographer” hearkens back to the pre-Wikipedia era, when odd phenomena you encountered in your travels did not have an explanation ready at hand on your smartphone. How has the smartphone transformed the urban experience?

The facts, as recorded in Wikipedia, offer everything but an explanation of the mystery at the heart of urban details—and so a dream or fairy-tale can sometimes offer a more satisfactory answer. These phenomena have their origins in someone’s dream and so their meaning can only be approached via dream scenarios. 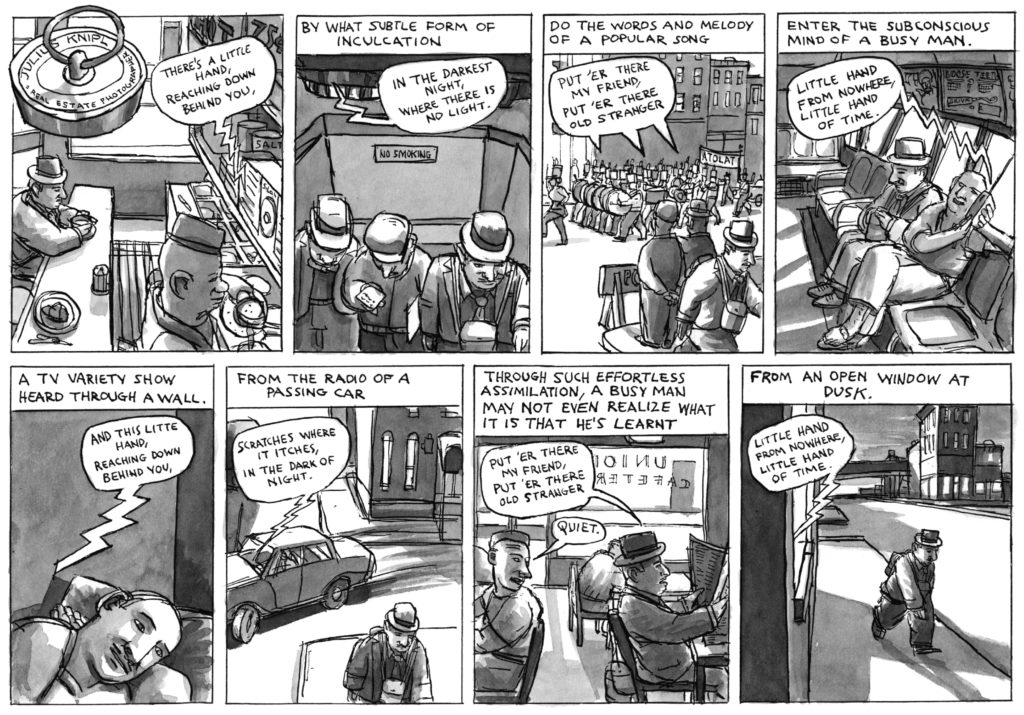 I loved the strip about Knipl’s visits to the last stops on subway lines. A 2008 story in the New York Times described these last stops: “At the city’s often-threadbare fringes, there is an inescapable sense of lonesomeness. There might be a Last Stop Deli, a forlorn bar, a maintenance yard populated mostly by rows of empty trains. There is, surprisingly often, a cemetery.” Your strip finds something wonderful in these last stops, but even here, I wonder if Knipl knows that one day these “last stops” will one day transform, become places that are less strange.

Fortunately, Mr. Knipl is not fully aware of these transformations—he lives in a city with endless last stops to be explored.

A self-reflexive sense-of-humor emerged almost directly with the rise of the Internet, one that riffed on the structures of web pages, web-speak, and the short-attention-span that afflicts the average Internet reader. The advertisements that appear in the margins of Cheap Novelties do the same for a newspaper print culture that was thriving when you wrote the strip and is now almost gone. When you wrote these strips were you thinking of a print culture that had preceded yours or one that still existed?

I loved cheap publications with an urgency to their design, like take-out menus, catalogs, palm cards, etc. I worked in a typesetting shop that produced this sort of material. My work littered the streets of lower Manhattan.

What do readers lose by reading these strips in a lovely hard-bound edition published by Drawn and Quarterly, or previously by Penguin, and not in their original context?

Book readers miss the disposable nature of newspaper comics. It was a free public utility. They miss seeing the strips surrounded by classified ads placed by actual suffering people. They miss having ink-stained hands and the struggle of reading ruined halftones and illegible lettering on cheap newsprint. 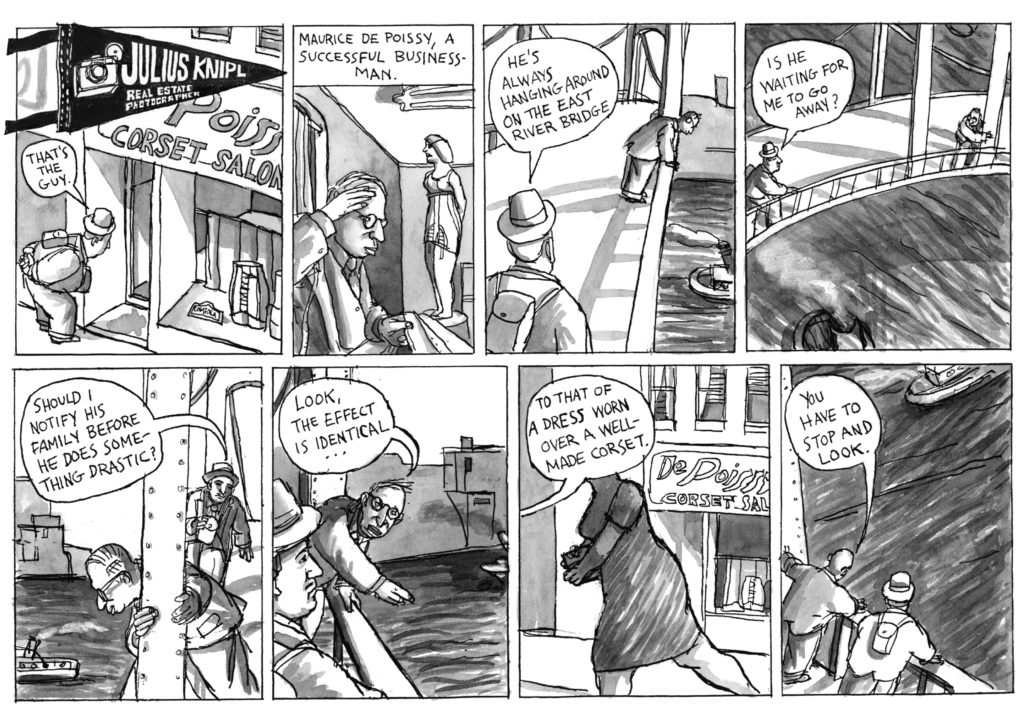 What do these strips gain from being published in the Drawn and Quarterly edition? Which context do you prefer?

I loved having these strips originally live in weekly newspapers, but by reading a collection, in book-form, the reader can more easily get an overview of my invented city. The printing in newspapers was generally of a very low quality. In the D&Q book, the image quality is perfect, and the size of the image is considerably larger, enabling the reader to actually see the drawings and read the text more easily. The design of the book is more to my liking. The original Penguin edition fell apart after a few readings.

Mortality haunts Julius Knipl. He is conscious that all he sees will not be around even within his own lifetime, and even then, not much longer after his death. The fear of mortality appears at the most granular level, when Knipl saves a page from a phonebook before the year’s phone books are scrapped. How much, in your own mind, did you develop Knipl, perhaps outside the page, as a three-dimensional character who constantly fears his and everyone else’s impending death?

Knipl lives only within the panels of that weekly strip. When I got the sense that readers were identifying too closely with him, almost as a dear relative, I ended the strip.

But of course, I said “haunts” and the title of your book refers to the pleasures of urban decay. Has Knipl conquered his fear of mortality?

Mr. Knipl was always too busy to think about his own mortality. However, the narrator of the strip had one foot in the grave.